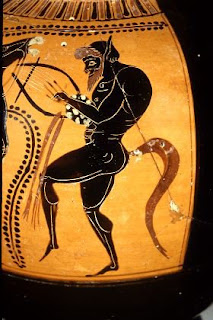 The Boastful Man-Goat. What a spectacle. In his own words, a candid admission - no, a boast - that he's some sort of serial sexual predator. He is indeed the man Letterman recently denounced as a "badly damaged human being" who deserved to be shunned by his countrymen.

With Hillary already leading by 10 or more points nationwide, the release of Trump's candid remarks should be enough to sink him for good.

The Guardian's Richard Wolffe writes this is the end of the line.

This is Donald Trump: a man no longer fit for polite company. His name will be torn off walls just as Ailes’ was. Republican candidates up and down the land will be chased to election day with their previous endorsements and quotes praising the groper-in-chief.

Condemning Trump’s words will not be enough to save them. It was just a few days ago that the US senator in New Hampshire, Kelly Ayotte, said “absolutely” when asked if she would tell kids to look up to Trump. She has since said she “misspoke”. But no amount of regret and criticism will erase that foolish misjudgment.

Ayotte’s misjudgment is really shared by an entire party establishment that is now stampeding for the doors. Republican leaders thought they could cutely tiptoe between their Trump-loving base and Trump-disgusted moderates. Just as they have tried to appease the Tea Party, Obama-hating fringe for the last eight years. Now they find themselves consumed by their own compromises.

The Republican establishment is beside itself. People catching red-eye flights to Washington to huddle in hope of finding some way to get somebody, anybody else on the ticket in place of Trump.  The Chicago Tribune reports that isn't going to happen:

The bigger problem is that voting has already begun. Or, to be more accurate, that it's too late to get Trump off the ballot. Every state has rules guiding how and when candidates can be added to or removed from the ballot. Why? For one reason because the ballots have to be printed and the mechanics of the election put into place.

Ballotpedia maintains a list of the deadlines for getting candidates on the ballot. Florida's has passed. Michigan's and Nevada's have passed. North Carolina and Ohio and Texas and Virginia -- all passed. The rules aren't always clear, but if you think a Republican nominee could be successful without any votes from the above listed states, you might want to revisit the electoral college map. Even if Donald Trump were to step down Friday night -- which seems unlikely, given what we know about Trump -- he's on the ballot in those states. The party could sue to replace him, but, even if they were successful, it's still too late for those 34,000 votes already cast.

Some prominent Republicans, such as Ana Novarro, are washing their hands of Trump:

Navarro was not the only one to point to Trump’s long history of seemingly misogynistic comments, and while the campaign tried to regain its footing this weekend, spectators revisited some of his most appalling outbursts: “fat pigs”, “slobs” and “disgusting animals”.

Having said in the 1990s that it did not matter what the media said about him “as long as you’ve got a young and beautiful piece of ass”, Trump’s attitude appears to have remained unchanged during his bid for the Oval Office. Take, for instance, his attacks on the Fox News anchor Megyn Kelly, who grilled him over previous accusations of sexism. Trump called her a “bimbo” who was incapable of objectivity when there was “blood coming out of her whatever” - widely interpreted as a thinly veiled reference to her menstrual cycle.

Other biological processes of women to have offended Trump include the need to take a toilet break - Clinton was branded “disgusting” for doing so during a Democratic debate - and breastfeeding a baby - opposing lawyer Elizabeth Beck was also “disgusting” for requesting a break to breastfeed her three-month-old daughter during a 2011 hearing over a failed Florida real estate project in which Trump was involved.

A Tsunami isn't just one wave but a succession of powerful, destructive waves. The leaked tape is just the first. Today's New York Times has the account of Jill Harth, another woman pursued by Trump. Presumably there'll be others coming forward just as happened in Ghomeshi and many other cases of this sort. With four weeks remaining until the election, Trump could spend the rest of the campaign reeling from lurid disclosures even as Republicans abandon him to run for cover.

Looking at it from the wider view it looks like the Koch Bros. attempt to remake the Republican Party in their image has backfired.

Every time I over estimated the collective will of the American people I been bitterly disappointed.

How long until Trump calls on Charles Harder to get the media off his back?
http://gizmodo.com/peter-thiel-s-lawyer-isn-t-stopping-his-war-on-journali-1787182743

The Republicans should remove Trump, and substitute Pence or someone else as their Presidential candidate. It wouldn't be about winning the Presidency, since losing it is inevitable, but helping the congressional races on the same ballot, which are at severe risk with Trump at the head of the ticket.

Just write off those states that have already printed ballots.

You mean there are men who think they're entitled to stick their dicks and fingers and tongues in any woman who catches their eye? Well, colour me surprised! I wonder if Roger Ailes has any advice for his protege.

Today we hear that, while Trump was boasting about sexual assaults, his security guard and his PR person were present. They didn't end the interview. Trump brags that he hires the best people, but he doesn't.

Redmeaat for the faithful, everybody else can tut tut but won't make a damn bit of difference. Trumpers revel in vulgarity and "incorrectness" these remarks are just more badges of honour despite what we might think.

Frankly it scares the shit out of me

Trump may have little respect for women but Hillary has even less respect for humanity.
Those re engined B52's will come in handy with a Clinton Presidency.
He also appeals ,quietly, to the born agains and evangelists who revel in female domination.

There is nothing, absolutely nothing, that Trump could do that would sway idiots like the anonymous TB above, which I will guess stands for Trump Bitch. The barbarians are at the gate.

Dana;with respect I think you have lost it!
Where do get the idea I support Trump?
I support neither candidate and as a Canadian have no dog in the race.
Both US Presidential candidates are abhorrent to me as with most people.
Seeing faults with Clinton is not support for Trump.

Have a nice day.

The exception I take with your remarks, TB, is that you presume to divine that Trump will be more respectful of humanity than Hillary. There's nothing to suggest anything of the sort. Based on what I've observed I would far sooner have the nuclear codes in Hillary's hands than Trump's. Only one of the two is rational, able to restrain their basest impulses. Hint: that's not Trump.

Problem with Pence is, crf, that he's a certified, dyed-in-the-wool christian dominionist who considers himself to be,"a christian first, and conservative second, and a republican third" (I wonder where being an American enters the equation?). Though it's it's extremely unlikely Drumpf will drop out, and next to impossible for the GOP to send him packing at this stage, if it did happen and he did win, Pence would likely select either another know-nothing of like mind like himself (Joni Ernst?) or some other Tea Party loon and then set the US firmly on the path to the theocracy that the American Taliban have been wet dreaming about since the 1970's. I think it's safe to say, though, that the Republican party brought all of this upon themselves over a long period of time, rendering themselves incapable of governing and instead fostering such deep fissures within itself by allowing the festering rise of racism, the anti-women everything crowd, religious fanaticism, Koch/ALEC corporatism, the NRA's open carry lunacy, and Grover Norquist's rabid anti-governmentalism. The GOP can effectively write this election cycle off for itself now as it's shown itself to be as cohesive, purpose driven, and focused as a roomful of scalded cats as, by now, GOP candidates are likely scrambling to build as high and deep a wall as they can between themselves and Drumpf's gutter mouth and mind. I'm no fan of HRC by any stretch as she's a progressive in stump speech only, but after four years she could likely be replaced by someone who actually IS one. with a Drumpf or Pence presidency, well, that may be something that America, and possibly the rest of the world, could never recover from...

The Ghomeshi and Cosby scandals showed that it's never very long before other victims of abusers/predators come forward. I expect Trump's own damage control types are busy assembling lists of those they may need to persuade to keep silent or else prepare to refute. With only four weeks to go it won't need many to keep Trump bogged down on the defensive.

I think a slogan the HRC campaign could use would be, "TRUMP. If you wouldn't trust him around your daughters, why entrust him with your country?"

Whatever happens, whoever wins the outcome will not be good for the USA or the rest of the world.
Suggesting that either of these candidates have merits is, to me, beyond comprehension.
There will be no real winner.
The elected President will,again, suffer from obstructionist ideologues in the opposition.
The USA is a superpower in decline and will not bow out gracefully.
Perhaps the discussion should be on how to deal with such a Government?

Try being a woman and listen to that garbage out of Trump's mouth. There are so many men running around like him. The monied people think they are entitled. It shows Trump was not taught to repect women. I wonder what his mother had to put up with? Disgusting and repulsive. How about if women were to hunt him down and cut it off. Yes...no doubt you men are shuddering. Well...it is very difficult for women to hold their knees together trying to deal with brute force. It is this kind of man who is supporting Trump. You politicians get off your arses and do what is right for a change.

Of course, neither he nor his faithful
have the slightest idea what an exemplar is ..

Its reassuring to know our previous government
drew heavily on the belief systems & tactics
of the GOP... which spawned such a bad joke

The attitudes to Clinton are the result of a more than 30 years war on her and her husband carried out by the hard right wing of US politics abetted by the right wing US news media. The myths that have been propagated and accepted by even relatively thoughtful people about her makes a long list, virtually all of which has been demonstrated to be empty and false.

That she is leery of the press today tells me that she has learned from experience that they are not to be relied upon to be rational when it comes to her history. And now her present.

There are many manifestations of misogyny of being demonstrated in relation to her as well as the simple minded acceptance of all that right wing steam, which is in itself almost purely misogynistic in nature in regards to her.

I think she'll make a fine president in these times, which are what they are and not what various proprietors of mirrored smoke and fantasy spinners would wish these times to be.