Floridians Come to Grips With a Threat Their Politicians Deny Exists 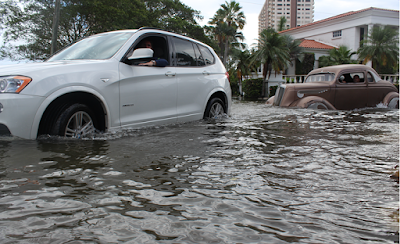 One of the issues I focus on every day or two is sea level rise. I suppose that's natural given that the sea is about a block down the road from where I'm typing this. Fortunately I'm also living atop a granite escarpment that gives me about 40-feet of breathing space, enough for my lifetime and at least another one after that.

Many other places aren't so lucky. One of them is Hollywood, Florida, a small coastal resort city lying between Fort Lauderdale and Miami.  Hollywood is featured in the latest Broward-Palm Beach New Times  for its ongoing flooding during King Tides.

Every October on the full moon, the water levels are the highest of the year — during the king tide. This year, the National Oceanic and Atmospheric Administration estimated an added three feet of water on Sunday and Monday in Hollywood. It was too much for the already low-lying neighborhood that regularly floods. Without a seawall protecting residents, water from Hollywood's South Lake gushed into the streets, inundating roads and driveways in two feet of water. At the peak level, it was lapping up at residents' doorsteps.

One newcomer to town is none too happy:

"We get trapped in our homes twice a day for two hours," says homeowner Peter Scher as he stands on his driveway's peak and the only sliver of dry land in his front yard. "It's getting worse... It's funny how the seller didn't mention [the flooding] when we bought the home in June."

Oddly enough, climate change is not a major issue in the Florida congressional campaigns. Young Floridians aren't reluctant to speak out:

"Some politicians are saying that [sea-level rise] isn't happening, but come to this street and ask the people who live here," says 12-year-old Rebecca. "You can canoe down this street. Soon it will be an underwater city!"

Older residents are learning to cope:

"Our next car is going to be a lease," one woman told her husband as they stood cross-armed in their inundated yard. "The salt water ruins the vehicle."

It's true. Saltwater baths are not kind to cars. They're also not kind to streets or the infrastructure that runs beneath them. Every time there's an inundation, salt is left behind as the seawater eventually retreats and it accumulates, sometimes even contaminating the fresh groundwater.

Hollywood, Florida is a community of palm trees, expansive green lawns and elegant, upscale houses. I wonder how long it can remain that way.

Roughly forty years ago someone wrote a pot boiler I think was called Condo. I can't remember the author's name; I thought it was Hailey but I can't find it. Anyway the book's theme involved shoddy construction along Florida's coast and keys which are basically sand banks. The plot had a hurricane sending in a powerful surge that undermined foundations and a tall condo apartment block went into the sea. Every time a hurricane heads toward the American east coast I think of that book. The author may have been peddling sensationalism at the time but the possibility is very real.

Turns out that "Condominium" was written by John D. MacDonald and later made into a made-for-TV movie that starred Barbara Eden of "I Dream of Jeannie" fame. The reviews were pretty good and it does sound prescient.

I do have to say that I have little sympathy for those buying property in Florida these days, Mound. If they wish to be ideologues about climate-change denial, then I suspect they are getting exactly what they deserve. For long-time residents, I sympathize.

"I'm also living atop a granite escarpment that gives me about 40-feet of breathing space, enough for my lifetime and at least another one after that."

I am in a similar situation in Vancouver. I am on a hill a few blocks from the sea. But what gets me is... my building may be ok... but I could easily end up on an island - iow
a) will the infrastructure (power, sewer, water etc) work?
b) groceries?
c) will I be (voluntarily) sharing with my homeless neighbours.

My only advantage is my age LOL.

We're all in a "wait and see" position. Those of us who have a realistic 15 to 20-years remaining shouldn't be significantly affected.

As for Vancouver, False Creek and Coal Harbour, being sheltered, should have less of a storm surge problem than the munis from Richmond to White Rock. Richmond is the miner's canary for the Lower Mainland. There's even been some talk of requiring stilts to keep homes above sea level during storms. Interesting times.