The "Dress Rehearsal for Fascism" 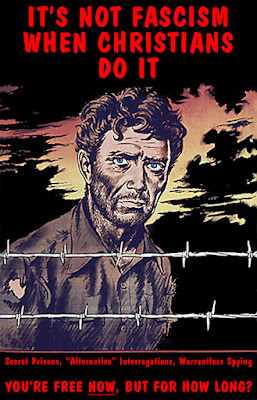 What we understood about American politics is, it seems, over. It's been trending in this direction for some time but in this election cycle there has been an abrupt and jarring shift ushering in an era of demagoguery and authoritarianism. The anchor of decency, basic human decency, has been lost. A boastfully self-proclaimed deviant and alleged serial sexual predator has a clear path to the White House. That he's also a severe misogynist, a racist, an all-round bigot and a pathological liar matters not in the least to his followers.

If nothing else this 2-year election campaign has allowed us to unlock the mystery of authoritarianism and, perhaps for the first time for many, including me, grasp the true nature of this dysfunction. It's now possible to make sense of what happened to Germany in the 30s, the failure of Weimar. It is the fulfilment of Sinclair Lewis' warning in his 1935 novel, "It Can't Happen Here."

The candidate who can provide the best show gets the most coverage. The personal brand is paramount. It takes precedence over ideas, truth, integrity and the common good. This cult of the self, which defines our politics and our culture, contains the classic traits of psychopaths: superficial charm, grandiosity, self-importance, a need for constant stimulation, a penchant for lying, deception and manipulation, and incapacity for remorse or guilt. Donald Trump has these characteristics. So does Hillary Clinton.

Our system of inverted totalitarianism has within it the seeds of an overt or classical fascism. The more that political discourse becomes exclusively bombastic and a form of spectacle, the more that emotional euphoria is substituted for political thought and the more that violence is the primary form of social control, the more we move toward a Christianized fascism.

Last week’s presidential debate in St. Louis was only a few degrees removed from the Jerry Springer TV show—the angry row of women sexually abused or assaulted by Bill Clinton, the fuming Trump pacing the stage with a threatening posture, the sheeplike and carefully selected audience that provided the thin veneer of a democratic debate while four multimillionaires—Martha Raddatz, Anderson Cooper, Clinton and Trump—squabbled like spoiled schoolchildren.

...The insurgencies of Trump and Bernie Sanders are evidence of a breakdown of these forms of social control. There is a vague realization among Americans that we have undergone a corporate coup. People are angry about being lied to and fleeced by the elites. They are tired of being impotent. Trump, to many of his most fervent supporters, is a huge middle finger to a corporate establishment that has ruined their lives and the lives of their children. And if Trump, or some other bombastic idiot, is the only vehicle they have to defy the system, they will use him.

The elites, including many in the corporate press, must increasingly give political legitimacy to goons and imbeciles in a desperate battle to salvage their own legitimacy. But the more these elites pillage and loot, and the more they cast citizens aside as human refuse, the more the goons and imbeciles become actual alternatives. The corporate capitalists would prefer the civilized mask of a Hillary Clinton. But they also know that police states and fascist states will not impede their profits; indeed in such a state the capitalists will be more robust in breaking the attempts of the working class to organize for decent wages and working conditions. Citibank, Raytheon and Goldman Sachs will adapt. Capitalism functions very well without democracy.

In the 1990s I watched an impotent, nominally democratic liberal elite in the former Yugoslavia fail to understand and act against the population’s profound economic distress. The fringe demagogues whom the political and educated elites dismissed as buffoons—Radovan Karadzic, Slobodan Milosevic and Franjo Tudman—rode an anti-liberal tide to power.

The political elites in Yugoslavia at first thought the nationalist cranks and lunatics, who amassed enough support to be given secondary positions of power, could be contained. This mistake was as misguided as Franz von Papen’s assurances that when the uncouth Austrian Adolf Hitler was appointed the German chancellor in January 1933 the Nazi leader would be easily manipulated. Any system of prolonged political paralysis and failed liberalism vomits up monsters. And the longer we remain in a state of political paralysis—especially as we stumble toward another financial collapse—the more certain it becomes that these monsters will take power.

Fascism, at its core, is an amorphous and incoherent ideology that perpetuates itself by celebrating a grotesque hypermasculinity, elements of which are captured in Trump’s misogyny. It allows disenfranchised people to feel a sense of power and to have their rage sanctified. It takes a politically marginalized and depoliticized population and mobilizes it around a utopian vision of moral renewal and vengeance and an anointed political savior. It is always militaristic, anti-intellectual and contemptuous of democracy and replaces culture with nationalist and patriotic kitsch. It sees those outside the closed circle of the nation-state or the ethnic or religious group as diseased enemies that must be physically purged to restore the health of nation.

...The Democratic and Republican parties may be able to disappear Trump, but they won’t disappear the phenomena that gave rise to Trump. And unless the downward spiral is reversed—unless the half of the country now living in poverty is lifted out of poverty—the cynical game the elites are playing will backfire. Out of the morass will appear a genuine “Christian” fascist endowed with political skill, intelligence, self-discipline, ruthlessness and charisma. The monster the elites will again unwittingly elevate, as a foil to keep themselves in power, will consume them. There would be some justice in this if we did not all have to pay. 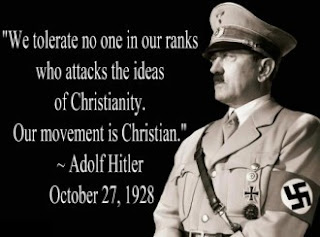 What of Hedges' "genuine Christian fascist endowed with political skill, intelligence, self-discipline, ruthlessness and charisma"? Some have already identified him in Arkansas senator Tom Cotton.

...the perfect candidate for new era Republicans may be the junior senator from Arkansas, 39-year-old Tom Cotton who boasts a dream CV, raised on a family farm and with combat service as lieutenant in Iraq and Afghanistan.

He is an extreme ideologue. He helped torpedo immigration reform to the distress of then-Republican speaker John Boehner. He sabotaged criminal justice reform declaring the US suffers not from too many in jail but too few, what he calls "under-incarceration".

In 2015 he tried to sabotage negotiations between the Obama administration and Iran by writing to Iran's Ayatollah saying any anti-nuclear agreement would be dishonoured by a future Republican president, breathtaking in undermining the foreign policy of his own country. He supported a short, sharp war against Iran. He wanted to arm Israel with B-52s to help. He received a campaign donation of nearly $1 million from Bill Kristol's Emergency Committee on Israel in fond appreciation.

He was described on Salon as "Sarah Palin with a Harvard degree; Ted Cruz with a war record."

...His raw inexperience combined with his relish for war elevates him to a level of menace that rivals that of 1964 Republican candidate Barry Goldwater.

Trump might be finished. But another playwright, Bertolt Brecht, warned: "Do not rejoice in his defeat, you men. For though the world has stood up and stopped the bastard, the bitch that bore him is in heat again."
Posted by The Mound of Sound at 1:04 PM