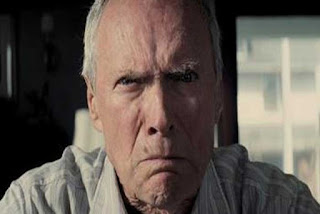 WWDHD - What would Dirty Harry do? Just this past August, movie tough guy Clint Eastwood rallied to Donald Trump's defence with this declaration:

“[Trump’s] onto something, because secretly everybody’s getting tired of political correctness, kissing up,” he said. “We’re really in a pussy generation. Everybody’s walking on eggshells. We see people accusing people of being racist and all kinds of stuff. When I grew up, those things weren’t called racist.”

Apparently angry old man Eastwood is laying low this weekend. Maybe we won't be hearing much from Clint for a while.
Posted by The Mound of Sound at 4:01 PM

OK, we know you don't like Trump.
Time to move on.
Trump will be gone in about a month.
Then we can go back to watching Oprah ,entertainment! tonight and the like to fill the void.

Will we talk child poverty, Aleppo,BC Government corruption or will we take on the Kardashians ?

TB, if you object to it, don't read it. I'm not sure I ever asked you to do that.

Surely the objective of a blog,amongst other things, is to solicit opinion?
You have a very good blog ; do you wish only to post agreeable comments?
I am becoming ever disappointed with the once mighty Guardian newspaper and with the equally once mighty BBC for sty fulling comment; please don't go down that path.

Your opinion on topics of my posts is quite welcome. Editorial direction, "time to move on," not so much.

I see this coming up a lot lately, this nonsense about how political correctness is ruining everything. It shows up in my Facebook feed occasionally. I found this quote by Neil Gaiman that Iike on the subject:

"I was reading a book (about interjections, oddly enough) yesterday which included the phrase “In these days of political correctness…” talking about no longer making jokes that denigrated people for their culture or for the colour of their skin. And I thought, “That’s not actually anything to do with ‘political correctness’. That’s just treating other people with respect.”

Which made me oddly happy. I started imagining a world in which we replaced the phrase “politically correct” wherever we could with “treating other people with respect”, and it made me smile.

You should try it. It’s peculiarly enlightening.


And I have started posting it as a comment on the memes and on my redneck friend's pages. I get some vitriol, but I don't care. I am tired of racism and sexism and agism.

So Trump is as just boorish as Bill Clinton who molested an intern while president. I remember how offended liberals were at Bill Clinton. They were demanding his resignation!!

Well unlike the Clintons, Trump didn't get rich taken in over $100-million in bribes.

Kinda funny how the PC pearl clutchers and the Christian fundies are equally offended by Trump's secretly-recorded locker-room banter. At least, the fundies are consistent.

I am much more offended by Hillary's secret speeches to Wall Street, the private healthcare industry, the private prison industry, the military industrial complex, etc. Because this kind of corruption causes destruction in the REAL WORLD.

When I grew up Trump's behaviour (on a leaked recording) would be labelled as womanizing NOT as being a "serial sexual predator."
Clint is onto something...
A..non

Hillary plans on forging a "progressive coalition" with Christian social conservatives. They will require that all males wear specially designed "cuck cages" that deliver an 80,000 volt shock to the genitals upon thinking a sexually impure thought.

It is sad that Clint, whose work I have long enjoyed, is spending his cinematic currency on such nonsense. Just goes to show that film icons should never be looked up to, I guess, except for their work.

The Star has upped the ante. They're now saying Trump's remark is "sexual assault."

In this "post-truth era" the media doesn't inform, it conditions and manipulates. I hope Trump wins just to stick it to these corrupt talking heads.

There are several episodes that support this accusation. Trump's tape merely corroborated them. Try to expand your focus. Try reading a bit more.

Anyong: I just love the "back room banter"...not! That sounds as if it is an attempt to lessen the statements by Trump the sex maniac.

LEAKED NEWS!!! The video Donald Trump Does Not Want You To See. Must Watch! Donald Trump tried to ban this video! But Trump Can't Hide THIS Anymore! http://foxnews.com/funny/Top-10-Things-Donald-Trump-Doesn't-Want-You-To-Know (Best Viewed on PC or Mac)