Could This Be How Trump Wins the White House?


Is the FBI pulling a Zaccardelli on Hillary Clinton?

You may recall how then RCMP commissioner, Giuliano Zaccardelli, gave Harper a leg up by announcing, in the midst of a general election, that then Liberal finance minister Ralph Goodale was under criminal investigation for allegedly leaking information on the Martin government's income trust policy.

After the election was over and Harper had defeated Martin, it emerged that there was no evidence of wrongdoing but that the commissioner himself had directed the groundless accusation be leaked. Even when summoned before Parliament, Zaccardelli refused to answer questions or explain himself.

Now, with less than two weeks before Americans choose their next president, the FBI have announced a fresh criminal investigation into more Clinton emails.

The FBI's head said on Friday that the agency would investigate additional emails that have surfaced related to Hillary Clinton's use of a personal email server to determine whether they contain classified information.

In a letter to several US congressional committee chairmen, Federal Bureau of Investigation Director (FBI) James Comey said that he "cannot predict how long it will take us to complete this additional work."

The timing of this announcement and this investigation doesn't smell, it reeks. Assuming the FBI was aware that Americans would be going to the polls on November 8th, it has to at least explain when it got these emails and how it's only investigating them now.

The FBI says it stumbled across the emails in connection with another case. What case? How are Clinton's emails connected to this other case? For how long have the FBI had these documents in their possession and control?

The Clinton camp haven't responded to this announcement but they can't ignore it for long. 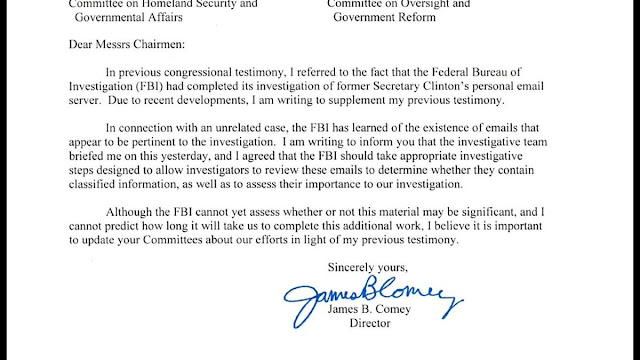 I have had a terrible, sinking feeling in the pit of my stomach for days now and it is growing by the hour.

Maybe this will make you feel better.

MichaelMooreTrumpland: The Sound Of The Dying Dinosaur

Comey's trying to get the heat from Trump and his monkeys off himself and the Bureau. Working too - today the FBI is Trump's best friend.

The emails are from a device that was discovered as a result of the Anthony Weiner weiner investigation. Weiner and his wife shared this device.There are apparently some communications between Weiner's wife, Huma Abedin, the vice-chair of HRC's campaign and HRC. These emails do not come from HRC's private server, nor from a device of hers.

Comey should be quietly replaced following the election - this vague and misleading letter to a Republican committee chairman shows incredibly poor judgement even if it's not malicious intent.

The difference between Zaccardelling and Comeying: Canadian media was actively spreading and promoting Zaccardelli's narrative while now it is actively seeding doubts into motives behind Comey's letter.
As usual, follow the money...
A..non

Based on the wording of the letter - which says f... all - the timing is very suspicious. Such a letter could have been sent at any time - including Nov.9th - since time, based on the wording, is NOT of the essence.

Come come now.
We have two terribly flawed candidates who will take us to the 'eve of destruction" regardless of your politics.
https://www.youtube.com/watch?v=qfZVu0alU0I

Considering that most of this blogs participants have no dog in this race are we to assume that there is a modicum of machismo here?

History will not be well served by either of these candidates.
No matter who wins the election the result is unlikely to be welcomed by the losers; the election will carry on and on.
I would suggest that this election will result in a fracturing of the 'United' States.
Neither candidate represents the realities of the world; so either candidate is doomed to fail.
As flawed as Trump is and as unlikely is it that he will be a good President; he represents a will to rid the USA and the world of the old boys club that has over the centuries ruled the Western world.

"...he represents a will to rid the USA and the world of the old boys club that has over the centuries ruled the Western world."

You've lost possession of your senses.

He is the epitome of the old boys club.

I"m no Trump supporter, and in fact briefly endorsed her, till the sleazy trump tape leak and all the BS false rape accusations that magically appeared afterwards, after which I withdrew my endorsement in disgust.

So when I say they should have properly investigated the emails, instead of originally giving Hillary a free pass, its not bias talking.

Still both of them have played in the mud so much that its makes the leaders in Canada's 2015 federal election look like a group of Choir boys/girls by comparison. Its all so surreal, you just feel soiled by watching it all, and for m thatbis no easy feat.

Dana.
Trump is not a career politician unlike all of his opposition.
Hence he is anti establishment.
From a financial point of view he is old boys club; money talks.
The fact remains both candidates are repulsive.
Aligning oneself to one candidate or the other , to me, is insane.
Around the world the electorate align themselves with popular est candidates.
The wish to be on the winning side seems to over power the wish to elect the right candidate.
So it is with Trump and Clinton so it is around the world.
FFS ; when our local hockey team or soccer team is eliminated we have to put on the jersey of the next in line no matter where they come from!
Winning is everything to most people!
If we did what is right we would have neither Clinton not Trump.
We would have neither Trudeau or whoever in the Conservatives.

Trump is a member of the establishment. But not a well-respected one. His anti-free-trade talk is just as shocking to robber barons as his Mexican wall to PC pearl clutchers.

Time to lob a Trump grenade at the corrupt establishment system! Hillary For Prison 2016! Turn the tide on the 25 years of bribe-taking corruption the Clintons brought the world, instead of enabling more of it.

"These emails do not come from HRC's private server, nor from a device of hers."

What about the 33,000 emails Hillary data-shredded AFTER an FBI subpoena? Or the old smartphones she smashed with a hammer? Or how Hillary lied to the FBI under testimony? Or how Hillary mishandled classified information or worse?

People have done hard time for lesser violations. When president Trump orders a special independent prosecutor to look into all this corruption, Hillary will be in the hot seat that's for sure. Her friends at the top will be rats leaving a sinking ship. Just her vs. the people.

They are truly FUBAR if they elect the unbelievably stupid and misinformed Trump as Commander in Chief.

FUBAR is already here, bcw. Witness the witless above.

Trump might be "the epitome of the old boys club" but he is not part of the cabal.

Trump scares the Washington Establishment, an amorphous group of lawmakers, lobbyists, journalists, lawyers and others. If he were elected, he could up-end Washington - and break things.
http://www.bbc.com/news/world-us-canada-37722897

imho, this is all about crippling the Clinton Presidency before it begins. Hillary must pivot back from supporting congressional allies and shore up her own path to the WH.

Hillary will be virtually powerless on domestic affairs (will not even be allowed a decent Supreme Court pick) - and driven to war abroad where she will be allowed to pretend to be Queen of the Sandbox.

I'm giving up. I can't watch this absurdist, surreal clusterfuck implosion any more.

I'm with you, Dana. I'm getting off at the next station the instant the train stops.

I leave you with this to contemplate.

You are starting to sound quite smug!
If music is you weapon take this!!

Not whilst there are dogs on the street..

Mound; It's time to police your blog.

Obama is clearly better than the two running to replace him, and a vast improvement over Bush. But Comey and Clinton are good examples that there has been only a marginal improvement over Bush in avoiding appointing less than fully competent cabinet members to these very difficult jobs.

No matter how aful Trump is, and I agree he is awful to the ultimate degree, a grifter born wealthy. It appears to me that the Clinton machine is responsible for making the world worse and the email from Wikileaks if true prove she will make the situation worse. So when you have to choose between children who should live, we have this kind of election. The media is the biggest loser in this, and maybe the people are the biggest winners. We have had the Randolph Hearsts and Murdochs using the power of the word to direct us forever. In this election they have found the ink well does go dry.

And for the utterly clueless ( not looking at you Dana - yes that is irony )
Here is a guide for the perplexed:

Both Clinton and Trump are unpopular.
Clinton is the establishment.
Dana can stomp her little feet as much as she wants, it only underscores that she is a partisan moron. No better, no worse than Trump followers.

Right from the get go, Clinton should not have responded once to Donald Trump and his tripe. She ought to have presented her platform and avoided everything else. Not smart, not smart at all. Anyong.