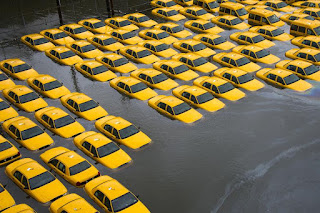 I've noticed it. Chances are good you have too. "It" is the marked change in local precipitation patterns.

I live in a place where we're used to pretty torrential downpours from squalls coming off the Pacific. They manifest in heavy rainfall and very high winds that can give the rains a horizontal effect. That had been the baseline for heavy storms.

It's not unusual today to experience significantly heavier rains of increasingly longer durations. Word has it we're in for a 4-day deluge starting later this week.

We all remember the floods that hit Toronto, then Calgary and just recently, Nova Scotia. In my town we had a massive downpour that lasted exactly 18-minutes, start to finish, but dumped enough water, about an inch and a half, that cars were floating down the mainstreet that itself was just a gently sloping block distant from the sea. Environment Canada has now issued a warning that we'll be hammered by heavy rains and high winds courtesy of four fronts that will arrive between Wednesday night and Sunday.

The frequency of floods of the magnitude of Hurricane Sandy, which devastated parts of New York City in 2012, is rising so sharply that they could become relatively normal, with a raft of new research laying bare the enormous upheavals already under way in the US due to climate change.

These findings and two other fresh pieces of research have highlighted how the US is already in the grip of significant environmental changes driven by warming temperatures, albeit in different ways to the processes that are fueling hurricanes.

The number of storms with Sandy-like floods is rising exponentially

An analysis of past storms and models of future events as the planet warms has shown that Sandy-like floods have become three times more common in the New York area since 1800. This frequency is set to climb further, from once every 400 years to once every 90 years by 2100, due to the effects of sea level rise alone.

Worse still, when the impact of future storm conditions, supercharged by the warming oceans and increased atmospheric moisture, is considered, New York could be swamped by Sandy-level flooding as frequently as once every 23 years by the end of the century, according to research led by Princeton University.

...Michael Mann, a climatologist at Penn State University, said that the studies deal with very different processes but are “examples of climate change impacts that are already threatening us here in the US and around the world, the devastating and unprecedented wildfires in Alberta last spring and the coastal flooding and massive loss of life from Hurricane Matthew being just the latest reminders, and which will only worsen if we do not act on climate”.

But the federal government, Justin's government, isn't taking this lying down. It's going to introduce carbon pricing. So? That won't do bugger all to answer our problem. The problem is what scientists call our "broken hydrological cycle." We've already heated the atmosphere. Warmer air (1) holds more water vapour which only (2) warms the air that much faster but also (3) shifts global precipitation patterns (4) triggering severe weather events of increasing frequency, intensity and duration and (5) creating both sustained and cyclical flooding and droughts. I don't care if you scored a D- in physics, you can still understand that.

This is where Justin hasn't thought things through. For the sake of political cover he's casting his carbon price as "revenue neutral." The taxes collected will be returned to the provinces in which they're harvested to go into general revenues and onward to whatever groups the governments of the day choose to reward. In this era of "everyday low taxes" that revenue doesn't have much chance of going where it's most needed.

So, where is that money most needed? It could be invested in adaptation measures to at least blunt the impacts of our broken hydrological cycle. Early 20th century storm sewer systems don't meet the demands of 21st century deluges. Cities need floodways. In my view the money collected should be directly linked to measures to cope with the impacts arising out of the problem on which the tax itself is justified. Sort of like diverting excise taxes on tobacco products to defray the cost of medical treatment of lung diseases. The whole yin/yang thing.

We have to start getting our minds about public policy responses to these challenges. So far that's just not happening.
Posted by The Mound of Sound at 9:39 AM

Mound said, "In my view the money collected should be directly linked to measures to cope with the impacts arising out of the problem on which the tax itself is justified."

Exactly. The "general revenue" category is a shush fund. Did you see Michael Moore's latest movie? He shows one country that itemizes its income tax form showing where the money will be spent.

No I haven't seen it Toby but I think it's available on NetFlix so I'll check it out.

Anyong: Amazing to see pictures of Newfoundland & Labrador flooded out, while people are denying Climate Change is the reason underneath the photos. Go Figure!

Here in the interior of BC, we're at risk for more forest fires and mudslides. If we ever got rain like the coast, it'd flood more than a few cities, too. We're used to drizzles for a few hours, at most.

Another risk I've been a bit worried about is our watersheds. With our glaciers melting at an alarming rate, the lake where I live was down rather noticeably for quite few months over the summer. Happily, unseasonably long and hard rains, like we get on the coasts, restored the water levels to normal in a short period of time.

It'd be nice for stability, but I think that's been lost. We won't see stable until everything normalizes. Will we will survive through the coming changes? I hope so, but I can't foretell that.


Anyong, I doubt we'll ever get rid of deniers given how entrenched climate change has become in partisan politics where it never should have been allowed.

Troy, much as I have great reservations about dams, I think many areas of B.C. will have to develop reservoirs to offset the failure of winter snowpacks. Reservoirs for sustaining life - human, all manner of wildlife, spawning streams for fish populations. I can't see any acceptable alternative.

Your eminently practical and sensible suggestion of what the carbon taxes should be used for are likely to be totally ignored by the gutless political whores who 'lead' us, Mound.

Lorne, really. "Gutless political whores"? What did that dentist do to you anyway?

But, yes, they are gutless political whores.