How Trump Tripped Up


Trump, being Trump, set himself up for disaster.

His top campaign staff wanted, even demanded, to run a forensic investigation on The Donald to uncover and prepare for anything scandalous that his opponent could use against him in the campaign - but Trump flatly refused.


Donald Trump's lawyers will be in a funk – last week their client paraded several women who accuse Bill Clinton of treating them inappropriately, and demanded that their stories be heard; but on Thursday, Trump launched a searing attack on several women who accuse him – Trump – of treating them inappropriately, and who want their stories to be heard.

And some in Trump's campaign are in a funk – they've revealed that Trump rebuffed their attempts at standard campaign practice, which is to research a candidate's past so that they might mount a counterattack in the event that, oh, say something like the "grab them by the pussy" video surfaced or a small army of women shared stories of a candidate abusing them.

Trump's campaign manager Kellyanne Conway definitely is in a funk – between the emergence of the video and the first of the new women's allegations of abuse by Trump, Conway thought she was skewering Hillary Clinton but, ooops, she stabbed Trump too, by re-tweeting a Clinton tweet: "Every survivor of sexual assault deserves to be heard, believed, and supported."

...The several iterations of Trump's campaign management sought, but always failed to get the candidate's agreement that they investigate his past, according to a report by Bloomberg.

Corey Lewandowski, his first campaign manager who now is a CNN analyst, wanted Trump to submit to a forensic evaluation – no; his successor Paul Manafort insisted to the point of it becoming a divisive issue – still no; old guard Trump advisers Roger Stone and Michael Cohen thought it would be a good idea – Trump didn't.

Wondering what to wear to this year's Halloween costume party? This one seems a killer for all the women out there: 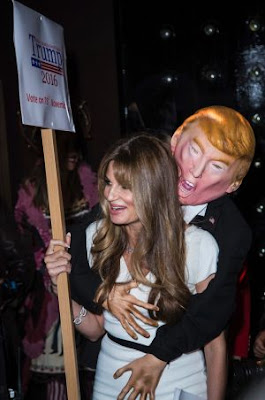