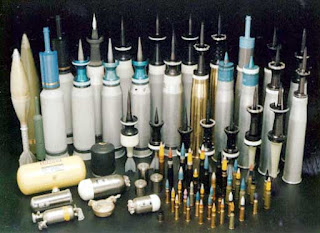 A report will be released later this week into the use by American forces of depleted uranium (DU) weapons during the conquest of Iraq in 2003. US government documents show that upwards of 181,000 rounds of DU munitions were fired, many of them against "soft" targets such as cars, trucks and infantry emplacements.

DU rounds, of the kind fired from the A-10's 30mm. Gatling gun, are designed to destroy heavy armour - battle tanks and such. The uranium is incredibly dense and its kinetic force chews straight through heavy armour. The worrisome problem is the aftermath of toxic and radioactive debris that some believe could leave dangerous contamination lasting thousands of years.

The Americans dismiss the dangers as overblown. Then again, since they're the side that used the weapons and created the mess, that's in their interests.

Depleted uranium is what’s left over when the highly radioactive substance uranium-235 is enriched – its isotopes are separated in a process that’s used to make both nuclear bombs and energy.

DU is less radioactive than the original, but is still considered a toxic chemical and a “radiation health hazard when inside the body”,according to the US Environmental Protection Agency.

Many doctors believe any possible negative health effects would most likely stem from the inhalation of particles after a DU weapon is used, though ingestion is also a concern. Though studies have been carried out in laboratory settings and on small numbers of veterans, no extensive medical research has been carried out on civilian populations exposed to DU in conflict areas, including Iraq.

...Within the United States, DU is tightly controlled, with limits on how much can be stored at military sites, and clean-up protocols are followed at firing ranges. In 1991, when a fire broke out at an American military base in Kuwait and DU munitions contaminated the area, the US government paid for the clean-up and had 11,000 cubic metres of soil removed and shipped back to the US for storage.
Posted by The Mound of Sound at 11:47 AM

.. the depleted uranium story is a biggie.. a real biggie..
Can't recall where I last saw a comprehensive article on it
but it was primarily about the health issues
hitting American military who 'handled' the ammo
.. at any stage of the ammo production, transport, storage
loading & firing.. or any after use residual contact..
ie spent shells handling, storage, recycling etc

The 'chain of contact' is stunning.. gloves, vehicles
and especially in regard to training.. and its logistics
combat itself is the least use.. in terms of actual exposure
uh.. aside from those on the receiving end ..
or innocents in those lands where DU were fired ..

That's quite interesting, Sal. If you can recall where you found the article I'd really like to read it.