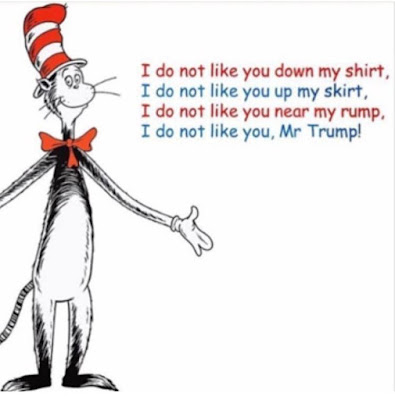 Now 10 women have come forward to say they have been sexually harassed or assaulted by the rough beast.

Is there a number that law enforcement officials require before they begin to look into these accusations?

Or is Trump right and American women are fair game to any man with the money and power to do as he pleases?

And he's still polling in the low 40s.

I think their Statute of Limitations saves Trump on most of these claims. Some do represent sexual assault while others are just pervy. If a more recent victim steps up there could be grounds to prosecute. I think it would be fitting that he wind up on some sex offender list.

How did this work with Cosby then? His charges are from 11 or 12 years ago now.


According to the latest leaked emails, Mrs Clinton told a Goldman Sachs conference she would like to intervene secretly in Syria.
She made the remark in answer to a question from Lloyd Blankfein, the bank's chief executive, in 2013 - months after she left office as secretary of state.
"My view was you intervene as covertly as is possible for Americans to intervene," she told employees of the bank in South Carolina, which had paid her about $225,000 (£185,000) to give a speech.
http://www.bbc.com/news/technology-37680411

Let us compare the misery of those "10 women have come forward to say they have been sexually harassed or assaulted by the rough beast"
with a Syrian calamity. Started and fueled by neocons.
No wonder that "he's still polling in the low 40s."
Some folks are better in math than others...
A..non

I'm not sure, Dana. However I understood that all but one of the alleged assaults were statute-barred. I think Cosby is just facing one charge.

I don't know what you're getting at, Anon. So she favoured intervening "secretly" in Syria. So what? JSOC intervenes covertly around the world. You should watch Jeremy Scahill's documentary "Dirty Wars."

Your comparison of Trump's accusers to the Syrian calamity is almost meaningless. What is your point? What is the coherence in your argument?

So what??? What has happened to your conscience, Mound?
So what in initiating and fueling wars in Iraq, Syria, Libya and Ukraine?
So what in creating the unimaginable suffering for tens of millions?
So what in supporting neocons and their agenda?

What is my point? Do not support neocons' candidate (inasmuch you dislike the alternative)
Is this coherent enough?
A..non

Shrieking now, goodness gracious. And of course Trump is widely known as a very self contained, non-reactive, thoughtful, pacific sort of guy.

Unless the shrieker is referring to one of the 7% candidates. The ones with an outside chance of getting .75 of an electoral vote.

Which would be a fairly generous estimate.

But do keep shrieking. It's fun.

A..non, it's certainly more coherent if not persuasive. Clinton was Secretary of State, an influential member of Obama's cabinet but one of a number of inner sanctum advisors, people such as the Secretary of Defense, the Chairman of the Joint Chiefs, the heads of the CIA, FBI, NSA and so on. She could recommend courses of action but her positions would be debated and, ultimately, it was her president's call.

This half-baked meme that Hillary was launching American forces into wars hither and yon is just that, half-baked. Good stuff for Trump rallies but not much else.

You see Trump as the counter to neoliberalism. He doesn't even understand the concepts much less how he would extract America from that ideology. You have to have something almost equally efficient to put in its place. A new economic order. What would that be in TrumpLand? There's a reason he speaks in such grandiose, sweeping statements. It's because he can't produce a convincing narrative of how he would begin to make changes of that magnitude. He's got nothing that would hold up under even the most basic scrutiny. It's a narrative scripted for gullabillies and he's plied that ware very successfully.

The Trumpery just scored his most significant endorsement yet. The Klu Klux Klan. You shall know them by the company they keep.