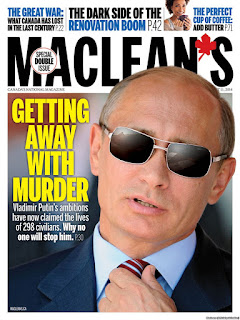 It's a form of conditioning, something we're not very good at detecting. We are being mentally mobilized for war, something that begins by demonizing our adversary. 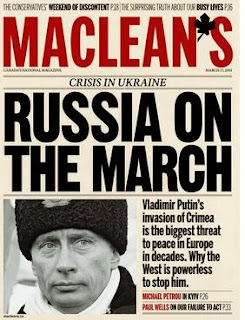 The warning came in the form of an editorial in the German financial paper, Handelsblatt. It offered the chilling observation that, in the wake of the Russian takeover of Crimea, the people of the West were being "mentally mobilized for war." 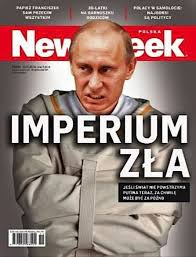 No mention of NATO's decade long march to Russia's doorstep. 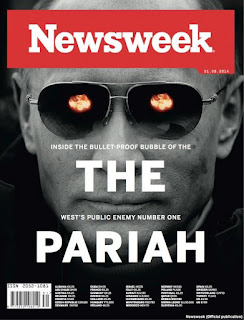 No mention of how Washington fueled the uprising in Ukraine. 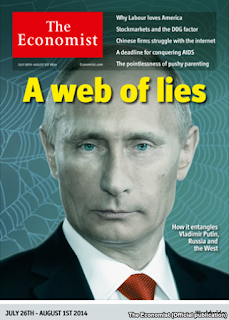 Now Russia is playing the same game. This time it's former Soviet leader, Mikhail Gorbachev taking to Russian airwaves warning that the US is trying to provoke war. 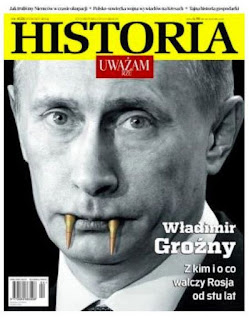 "The world has got to a dangerous phase," former Soviet leader Mikhail Gorbachev said in an interview with state news service RIA Novosti on Monday.

Now America seems to be drifting into a muzzle-to-muzzle confrontation with Russia in Syria. Having already been outmaneuvered by Putin in the Syrian civil war, partly a function of America's war fatigue with its 15-year long and no end in sight conflicts in the Middle East, Washington may not have as many options remaining as it would like. 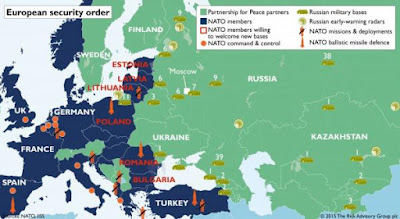 Is the United States trying to provoke war with Russia? Probably not. Is the United States deliberately trying to menace Russia? Absolutely. The map above illustrates how close NATO forces in the Baltics are to Moscow. Imagine a similar deployment of Russian forces that close to Washington. Yet we treat it as tantamount to an act of war when Russia deploys Iskander missiles to its sovereign Baltic territory of Kaliningrad. 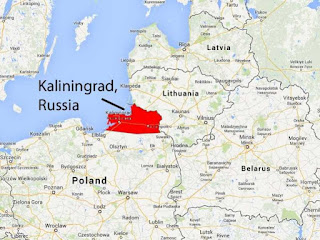 This nonsense, this drift, has to stop. We have to revisit the idea that we are responsible for creating the very conditions in which nations have backed themselves into protracted and bloody wars in the past.
Posted by The Mound of Sound at 10:46 AM

Conditioning the population is so effective that few notice that it's all cocked up. Try telling your neighbours, particularly the old vets, that this is propaganda and many of them will get hostile. Some of your extended family will think you are nuts. We can't win; all we can do is hang on for the ride.

like a cork tossed atop a turbulent sea, toby

In the end, it what is done is all that matters.

What has Putin done? Delivered nuclear missiles north of Europe, and seeded Syria with both S-300 and Russian troops.

I would hazard Russia's ready to be drawn into war. They probably won't provoke one, though.

Are we ready for war with Russia, though? Perhaps, we the populace are, but are our leaders capable of such? I look at Putin, and see a competent leader. I look at Western leaders, and see a pack of fools, each more eager than the rest to stumble into war with Russia.


The scenario that the expert types fear, Troy, is a repeat of WWI in which rival powers shadow box until one of them accidentally lands a hard blow on the other triggering a shooting war, a real peer-on-peer conflict that neither of them intended or wanted. The South China Sea is also considered ripe for this sort of stumble into war.

Banging the War Drums & Rattling those Sabres & Mental Mobilization for War Proceeds Apace... courtesy of military-industrial-financial complex.
Personally, I refuse to be a cannon fodder, participate in involuntary immolation or be subjected to the radiation poisoning. All of us should oppose creeping hijacking of the political systems by the military-industrial-financial complex...
A..non

Well you can "refuse" A..non but,short of digging a personal bunker in your backyard, what does that amount to? I wish I could refuse to allow our leadership to do dumbass things but somehow I don't think that'll change anything.

When Trump wins the election on Nov 8th, the mounting tensions between the US establishment and Russia will evaporate.

Trump will make for a lousy president, but certainly not the worst of the neoliberal era. And afterwards, Americans will not tolerate a return to war-for-profit interventionism.

The times they are a changing!

Happy to see that A..non is acceptable again along with free speech.
What can we do what will we do?
I think your memory can be short.
Ban the bomb is not so far in history as to be forgotten.
The idea of a war in the Middle East is not popular in most Western countries having seen through the myth of Vietnam, Afghanistan and Iraq and increasingly Libya.
Sending soldiers to fight unjust wars is no longer acceptable.

Trump isn't going to win the election. While that's a good thing, Clinton not winning the election would have been just as good a thing. Neither of them winning would be best of all, but that one is definitely not going to happen, worse luck. If only some alien body snatcher would take them over and we could have rule by despotic alien overlords out to suck our souls, instead! But no.

So Clinton will win. And Clinton definitely wants confrontation with Russia. And thus far, there seem to be no actual or contemplated US wars since the 90s that Clinton has not encouraged, and none, apparently including Libya, that she has regretted. Even so, she presumably does not want all-out war with Russia--she's not an idiot. She presumably thinks Russia can be intimidated into knuckling under, and/or fooled into letting incremental moves pass without opposition due to the costs of such opposition. This belief is backed up by a basic faith in the US mythology of its own near-omnipotence. And she is not a very flexible thinker, and so will resist changing her established mind-set. Unfortunately for her, Russia is through with that stuff, having seen how it worked out so far. They also seem to be through making deals unless US default is costless for them, because they have noticed that Americans always renege on deals with them the moment they find a backstab convenient--which often seems to be before the ink is dry. Indeed, it seems there is a growing body of opinion in Russian decision-making circles that the USA is currently institutionally incapable of making and sticking to agreements even if the principals may genuinely want the agreements, and so there is no further point in trying. So, Russia will from now on very likely resist most US attacks and maneuvers.
The question, then, if Clinton will insist on pushing Russia on the assumption that this will work and they will back down, and if that is not in fact true, just how much damage will happen in between it becoming clear that the Russians are not backing down and Clinton becoming willing to believe this and realizing that military force is not a usable policy solution vis-a-vis Russia? Just hoping not too much, and by "not too much" I mean "stopping short of nuclear war that kills us all".

We almost certainly can't stop any of this, no. But contra Toby, I don't think that just because you can't win that means all you can do is hang on for the ride. In the somewhat Three Musketeers-ish book "Five Hundred Years After" by Steven Brust, our heroes arrived too late and their opponent, who was overthrowing the Empire they were sworn to uphold, said (paraphrases, can't remember precise words):
"You cannot stop me now. It is too late."
"We know that."
"Then what are you doing?"
"We are trying to stop you."

The Russian military is no match for USA. My take is that Putin will not hesitate to use smallish nukes if cornered in Syria. The only hope is with... Bibi. He might not be keen on catching the fallout. Maybe this was on the agenda on one of his three recent visits to Moscow...
A..non

The reason the Russians have been making provocative noise about nukes is that it's the one area in which they're equal, even superior, to the US.

The Russian military is no match for the US in some ways but not, perhaps, in its willingness to accept casualties. Most of today's US military is post-Desert Storm. They're used to relatively bloodless combat in which they hold all the cards. They have no experience of "peer on peer" warfare, sending flag-draped boxes home by the hundreds daily.

The other factor is the folks back home. The Russians are convinced America's civilian population wouldn't find serious casualties acceptable.

These are issues that have been debated in depth by both senior military and academic experts. You might want to get your hands on a copy of Mark Urban's book "The Edge" in which he explores the vulnerabilities of our extreme-tech military to an adversary who, instead of matching us, concentrates its efforts and resources on just one or two critical areas. The reality is anything but confidence-building.