What About the Notable Deplorables? 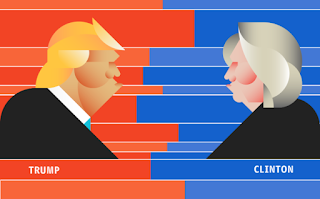 By contrast, here's Clinton's list. Fair warning, compared to Trump's list, this one is going to take much longer to work through. Maybe you should pack a lunch. This one also makes for tougher slogging. You won't find merely as many notorious characters, felons and low lifes. Kind of makes it boring.

One big difference is in daily newspaper endorsements. Hillary has 91. 9 have chosen to endorse no candidate. 8 have opted simply to not endorse Trump. The number of dailies endorsing Trump? Seems that's a big zero.
Posted by The Mound of Sound at 5:52 PM

Yes Hillary has the neoliberal vote, the neocon vote and the establishment Imprimatur. And what does this say about her and whom she's going to represent if she goes gets back in government?

How about in her own words: "My dream is a hemispheric common market, with open trade and open borders, some time in the future with energy that is as green and sustainable as we can get it, powering growth and opportunity for every person in the hemisphere."

Now why is the establishment hysterical over Trump? Because he's Adolph Hitler? More like Archie Bunker. I think a Canadian headline is more telling:

The establishment is attempting to wind back the economic development clock to the 19th century, equalizing living standards downwards with outsourcing schemes.

The biggest problem with these grand liquidationists*, is that they will cause the global economy to collapse in the process, (via depressed demand) like they did during the 1930s, when they triggered the Great Depression: i.e., deflationary death spiral; i.e., deleveraging "paradox of thrift."

The world needs a New Deal by 2020. Hillary is in the way. Time is not a luxury at this stage in the game.


*The leave-it-alone liquidationists headed by Secretary of the Treasury Mellon ... had only one formula: "Liquidate labor, liquidate stocks, liquidate the farmers, liquidate real estate ... It will purge the rottenness out of the system. High costs of living and high living will come down. People will work harder, live a more moral life. Values will be adjusted, and enterprising people will pick up the wrecks from less competent people." (Wiki: Great Depression)

Anon is right.
The main asset of Trump is that he would be disruptive... And it's about time.

Now, we will have the "same-old" being cheered on by those it hurts the most.

Trump offers no New Deal except to those willing to believe a demagogue who cannot even speak in sentences but merely blurts out empty phrases, over and over. Demagogues always appeal to a certain type of follower, people very much like yourself.

Constitutional experts have been warning for months that the only way for Trump to deliver on even his most basic promises would mean governing extra-constitutionally. He would have to suspend the constitution which would mean a very rapid impeachment and the president being dragged off in irons. Unless, of course, he managed to pull off a palace coup and appoint himself dictator. There was a time when dictator was a respectable occupation. Perhaps he'll restore that era.

Have you named your free unicorn yet?

Mound, you seem to think that I actually support Trump - he's a buffoon.


What is needed is either a revolution or real change. It's happened in the past. Not going to happen now.


Neither Trump or Clinton are good candidates.
One is insane, the other offers platitudes.

As to "governing extra-constitutionally", you'd be hard pressed to find a president who has not done that. Obama has found ways to justify drone murders to domestic spying...

No, Anon, I meant extra-constitutionally in the sense of actually suspending the US Constitution. All presidents have danced at its edges, none yet has even suggested suspending it.