Why Next Month's Presidential Election Weighs Heavily on My Mind 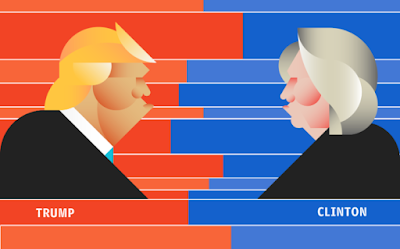 For starters, I don't like Hillary either. I do, however, want her in the White House in January.

I'm worried. I'm worried about Syria, about tensions in the Baltics and along Russia's western borders, about climate change and a host of other issues that will confront the next American president.

Anyone with any sophisticated grasp of these problems knows that Hillary alone has the experience and aptitude to deal with them.

I truly believe that from here on in every presidency is going to be more challenging with ever higher stakes than what we've known for generations. We're coming into a dangerous, volatile time.

Earlier this month I came across a chilling piece in Foreign Policy suggesting that, no matter who wins next month, America is likely to get drawn into a shooting war in Syria. That could bring America muzzle to muzzle with Russia in an active war zone. The possibilities, as they say, are endless.

My thoughts wandered to all the sabre-rattling that's going on today and it is plentiful and loud. It's as though somebody found the Cold War switch and flipped it back on. That reminded me of an editorial published in Germany's prominent financial paper, Handelsblatt, in August, 2014, warning that the people of the West were being "mentally mobilized" for war. True enough then. Truer yet now. The spectrum of options narrows, displaced by the politics of escalation.

It would be comforting if Donald Trump was an aberration on the world scene. He's not. If anything, he's just America's part of a contagion that's becoming established in Central and Eastern Europe, South Asia and Asia Pacific, and could soon spread elsewhere.

This malignancy goes deep. Last week I wrote of a retired, 4-star US Navy admiral's impassioned defence of the Trans Pacific Partnership, casting it as a weapon of economic warfare against China. It reminded me of the last time the US used economic warfare against an Asian rival and how that led to the events of a Sunday morning on December 7, 1941 and ended with ushering in the age of nuclear warfare.

America is already wounded. Its democracy - save for the trappings - has been torn out to make room for the establishment of oligarchy. Even its highest court has succumbed to oligarchy, a sad fact evidenced by its decision in Citizens United. Republicans see this election as their last hope of continuing the judicial subjugation of the American people in order to underwrite the ascendancy of the corporatist state.

War, is by far, the greatest scourge of Humankind. Bar none.
When in doubt, choose a candidate not supported by the military-industrial-financial complex.
A..non

Sure, go for the "broken human being" with the attention span of a fruit fly, a volatile and delusional temperament and an absolute superiority complex. Sorry but you're becoming idiotic.

For the life of me I can't understand why the Canadian media continues to broadcast blow by blow details of a foreign campaign in which the principals hurl insults at each other. Kim Campbell once attained notoriety by quipping that a political campaign is no time to talk about issues. Well, this US Presidential campaign is doing everything it can to avoid all the issues you write about, Mound, and mainstream media seems to accept some sort of normalcy in it. The failure of Big Media to confront politicians on the issues of our time is inexcusable. That they prefer to concentrate on personality quirks scares the hell out of me. I can't help but believe that if Big Media had done its job properly, neither Trump nor Clinton would be still in the running.

I never pay attention to this Anonymous guy. He always says the stupidest things and is forever contradicting himself, sometimes even debating himself in the same forum.

"Anyone with any sophisticated grasp of these problems knows that Hillary alone has the experience and aptitude to deal with them."

Anyone with any grasp of these problems knows the reason American politicians keep bombing more and more Muslims is because they are getting kickbacks from the military industrial complex. (Usually paid post-public-service in speaking fees.)

Trump believes in maintaining peaceful relations with Russia. Hillary has revived the cold war with Russia as a campaign strategy to target neocons.

So Trump trumps Hillary on foreign policy. He believes in unwinding US "interventionism" and spending the savings on tax cuts. Hillary, on the other hand, is a war hawk looking to square off against Russia in Syria which could trigger WW3. (She supports regime change; the Russians support Assad.)

I trust Trump with the nuclear codes. He's invested in the real world: fancy hotels, golf courses, super-model wives. Hillary, on the other hand, is involved with a process of corruption that has taken on a life of its own and is spiraling out of control.

Anon - "I trust Trump with the nuclear codes." That's a statement I would associate with someone who has spent little if any time studying the history and science of modern warfare and even less time delving into the competing major theories of nuclear escalation. Hotels, golf courses and heavily upholstered trophy wives, really? Can't you shop these idiocies somewhere else for they add nothing to this discussion.

Based on your previous behaviour
Regarding our own existential election question,
I'd expect you'd be shilling for Jill Stein

Anyong: BBC last night talked about Putin wanting to re-open bases in Vietnam and build one in Cuba. That says a lot about where Putin's mind is. He and China have supported Trump with the hope Trump wins and takes the US down the tubes. It will be "All the better to beat you with". If people think we are not in a cold war, they better do some serious listening and reading. We are.

I've cleared out the comment clutter. If anyone chooses to post drivel they should take it elsewhere. It's neither helpful nor acceptable here.

By me, you led with exactly the wrong points--Syria, tensions in the Baltics and along Russia's western borders. Foreign policy, and even those exact issues, are precisely the area in which Clinton's experience, carefully thought out policies and carefully picked team sharing her ideas are pretty certain to be far more dangerous and cause far more damage than Trump's volatility, buffoonery, impulsiveness, and utter lack of preparation.
Why? Because Clinton's experience is with destroying countries, her carefully thought out policies are plans for more of the same except with an increased emphasis on trying to force Russia and China to submit to US imperial dictates, and her carefully picked team are vicious warmongering neocons whose degrees of separation from PNAC start at zero and range up to maybe two. Trump is likely to create a few disasters by accident, but creating disasters forms the majority of Clinton's carefully honed planning.

On domestic issues, Trump manages to be even worse than Clinton for the most part, and certainly more idiotic. But on foreign policy, it's like being given a choice between being in the power of a lunatic whose random behaviour might kill me, or being in the power of a calculating person whose stated aim is to kill me and sell my organs, who has the facilities, buyers lined up, careful arrangements for the financing, a qualified surgeon and nurses. The latter person is more intelligent, more predictable, in a sense far saner, but the obvious choice is the lunatic--my chances of survival are far higher. The rationality of and profits made from my murder would not be a consolation if I chose the other way.

it seems to me as if we are discussing who will destroy the world first.
Of the two candidates Trump has the ear of Putin they are mutually compatible.
This is not an endorsement but fact.
At the end of the day democracy ,for all it's worth, is the loser.
It is incomprehensible to me that a Canadian blog should boarder on the point of self destruction with comments and deletes commenting upon a situation they have no input or control over.

There are a lot of brakes to America getting into a war in Syria if Russia remains militarily active there, no matter who is President. The brakes were put on in Ukraine too, after Obama's original State Department-led interference there led to an even greater Russian military interference.

Clinton is also not so stupid that she will not learn from Obama's mistakes. War is a political loser.

Just when I thought I'd cleaned out the stables, another pile of crap from Anon. Oh well, that's why we have shovels.

I must say that, while it's obvious neither of the candidates is in fact a confidant of Putin in any way and any stories about such are typical fearmongering, if I had solid evidence that either of them in fact was in Putin's pocket I'd vote for that candidate in a heartbeat. Putin is a far better leader than either Trump or Clinton and, bizarrely, probably has better intentions towards the United States than either Trump or Clinton. If I were an American and were given the news that I could vote for one of those candidates and it would effectively put Putin in control, I would breathe a massive sigh of relief.

I mean, really, what Putin wants of the United States is for it to stop doing dysfunctional imperialist stuff and to settle into an international order that has relatively stable areas of influence for regional powers and some semblance of respect for international law. A stable multipolar regime with a revitalized and more nonpartisan UN. Accepting such an international regime would be very good for the US; it would stop them from wasting untold treasure and effort doing things that only benefit very narrow US groups.