"When you’re a star they let you do it. You can do anything." 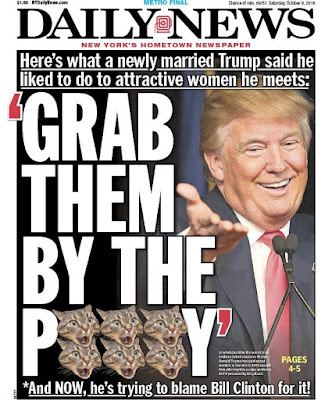 It's over for Republican presidential nominee Donald Trump after a tape leaked in which he tells Billie Bush that, as a celebrity, he can freely grope women and likes to "grab them by the p&@#y." He made the remarks while on a private bus some three months after marrying his third wife, Melania. There's no getting around this. Trump was describing his ability to sexually assault women with impunity.

The Washington Post broke the story, releasing the recording. Trump's reaction? He tried to blow it off, saying Bill Clinton has said worse.

The Republican establishment is almost catatonic with the election less than a month away. Their last best hope is that Trump will resign although many Americans have already voted by advance ballot.

Meanwhile, The New York Times, has followed up with a report of another woman who alleges she was sexually assaulted by the Republican nominee. The Great Orange Behemoth is suddenly looking like America's Caligula.

It remains to be seen if Trump will, as he claims, show up for Sunday's debate with Hillary Clinton.

Meanwhile Nate Silver released this projection of what the Electoral College vote will look like if American women turn their backs on Trump: 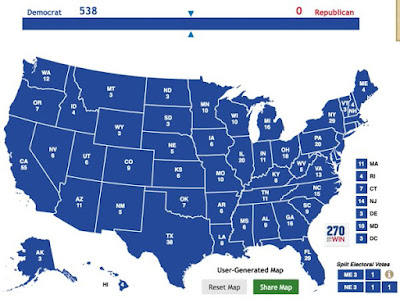 Then there's this, from Rachel Maddow:

There probably isn't enough time to hold another convention. So what if Trump resigns the nomination, as many in the party establishment seem to wish he would do, and then the Republican National Committee decides to replace him with Pence or somebody else?

(b) In voting under this rule, the Republican National Committee members representing any state shall be entitled to cast the same number of votes as said state was entitled to cast at the national convention.

(d) No candidate shall be chosen to fill any such vacancy except upon receiving a majority of the votes entitled to be cast in the election.


Would the Supreme Court then deal with what to do with the early ballots and problems arising from state filing deadlines, or have those boats already sailed?

Why so much excitement to Drumpf's comments?
Because he said a truth, for a change?
At least a truth about substantial group of women?
A..non

@ A..non, that's because a lot of Trump's base consider themselves the "make America great again" type, not the sort that want a satyr for their leader.

Drumpf will be "Satyr the lesser" when compared to Bill or beloved JFK.
Truth can be very unpleasant...
A..non

I find it astounding, A..non, how many people are taking the Trump line in making this some comparison between him and Bill Clinton. Correct me if I'm wrong but Bill Clinton isn't running this time. Trump's opponent is a woman, the Satyr's favourite prey.

Why don't we just dispense with the Bill Clinton bullshit now?

Anonymous Anonymous said...
Drumpf will be "Satyr the lesser" when compared to Bill or beloved JFK.
Truth can be very unpleasant...
A..non

There is a difference between Donald Drumpf and the former presidents. They were and are great men . Donald Drumpf however is an orange 70 year old trust fund baby with the temperament of a 12 year old boy and the hands to match. If you listen to the way he strings sentences together you know hes dumb as a bag of hammers and dishonest as the day is long. Hes talking about feeling so entitled he feels like he can grab attractive women by the genitals . He lies more than any man i have ever seen RIGHT INTO THE CAMERA. You are defending a fucking sociopath , or are you just the biggest troll who has found a goldmine of material to get off on . Ok you can start defending Bill Cosby now because i bet the women to come forward accusing Drumpf now will be monumental compared to Cosby. We don't have to allow the world to burn because people like you want THEIR guy to win when hes clearly deranged.

You are getting of topic, Jason S.
"you can start defending Bill Cosby now"
"He lies more than any man i have ever seen "

All I said that Drumpf stated (very unpleasant to some) truth.
And that Bill and JFK were more prolific than Donald.
Focus on those 2 FACTS...
A..non

A..non, just because you think your two chosen facts are relevant hardly means anyone who thinks somewhat more clearly need consider them relevant.

Yes Trump was speaking the truth - about his inability to control his basest instincts, demonstrating that he has a pretty dark compulsion.

Secondly, you have no possible, much less credible way of knowing that Clinton and JFK were "more prolific" at anything than Trump. That's a "fact" you've simply pulled from the depths of your backside.

I think we all have your points. No need to keep flogging that dead horse.

Sorry Mound my foot was already in mid swing the horse is getting one more.
A..non you two points are Donald Drumpf speaks the (snicker) truth. I've been hearing from a lot of people.. a lot of people ...that Donald Drumpf is a tremendous liar . Huge liar ..... the bestest liar with the best brain ever.
And there is a difference between women being seduced or throwing themselves at the most powerful man in the world and a 70 year old orange man child grabbing beautiful women by the genitals without their consent. The difference is a criminal charge. But hey it looks like the grand old party is about to explode i'm cooking up some popcorn here comes the fireworks.