Who Said Anything about Nuclear War? 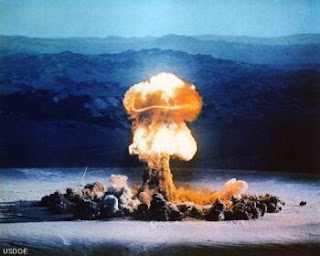 Just thought you should know. Russian president (and Trump admirer) Vlad Putin today suspended tore up a deal between Russia and the U.S. on cleaning up weapons grade plutonium.

The Russian explanation? Boil it all down and it's American hostility to Russia and Russia's distrust of America's willingness to keep its part of the treaty.

"The Obama administration has done everything in its power to destroy the atmosphere of trust which could have encouraged cooperation," the Russian foreign ministry said in a statement on the treaty's suspension.

"The step Russia has been forced to take is not intended to worsen relations with the United States. We want Washington to understand that you cannot, with one hand, introduce sanctions against us where it can be done fairly painlessly for the Americans, and with the other hand continue selective cooperation in areas where it suits them."

When then Secretary of State Clinton signed the deal in 2010 she said that there was enough weapons grade plutonium in Russia and China for 17,000 nuclear weapons.

Speaking of the Cold War, anyone remember the name of this asshole? 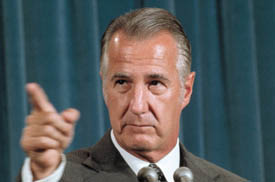 Spiro T. Agnew. What can I say?

That would be Spiro Theodore Agnew, whose resignation for reasons of criminality led to Gerald Ford tripping and falling into the White House.

A future NYT columnist wrote some words for Agnew to deliver in a speech and those words resonate to this day. Remember what they were and the name of the future columnist? Hint - he eventually went on to insist in the Op-Ed pages of the Grey Lady that WMD had been found in Iraq.

Right you both are. The phrase I recall - "nattering nabobs of negativism" but I had to look up the author, William Safire. Which, in turn, brought back the recollection of a somewhat extended email exchange I had with the late Mr. Safire many years ago. Of that exchange I can only recall that I was entirely right and Safire entirely wrong although I'm not entirely sure he was entirely convinced of my take on whatever in hell we were discussing.

Yeah, that's him. I fired off many emails to him back in the early 2000's. I suspect I may have been overly profane for him because I strangely never got a reply from the shit brained war mongering rat fucker.

Yes, Dana, he was a deeply flawed individual but that wasn't his only quality.

Syria is about to go hot.

I read about the S-300s going in a few days ago. They've already got the even more capable S-400 deployed at the Russian naval base there.

The main thing I know about the 300 and its successor is that they have the West scared shitless. They're considered the gold standard of surface to air defences. When Israel got wind of an earlier shipment of 300s to Assad they launched an airstrike that destroyed everything before it could be made operational.