Ezra Gets a Drubbing 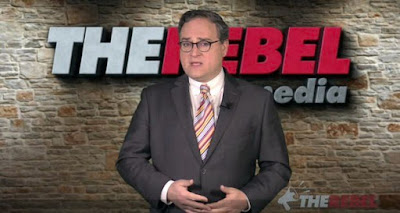 Has he even paid off his judgment creditors yet? It seems Ezra Levant's Rebel Media is flush with funds, enough to send three "journalists" to the upcoming UN climate summit in Morocco.

The three pseudo-journos are still going only without UN accreditation to the summit. Levant's outfit applied but got turned down, turfed out so to speak.

Nicholas Nuttall, a spokesman for the UN Framework Convention on Climate Conference, said the organization tries hard to make sure those who get accreditation are genuine media rather than advocacy groups or non-governmental organizations pretending they're media.

"We had never heard of Rebel Media before but we looked at their website and, to be honest, they seemed to be in the bracket of being something of a one person band, espousing an individual's view of the world, rather than being a serious media operation," Nuttall said in an email.

"Some of the headlines seemed to verge on extremism as well."

Levant has now asked the prime minister and his environment minister to intercede on his behalf.

For anyone worried that the UN is thwarting journalistic freedoms, DeSmog has the skinny about why Ezra wants his team at the UN summit. Reporting on the summit itself has virtually nothing to do with it.
Posted by The Mound of Sound at 1:34 AM

This is rich beyond words, Mound.

While I pay no attention to Ezra Levant I can't help wondering if the UN is trying to control its message. Names like Henry Luce, W.R. Hearst, Conrad Black don't exactly suggest fair presentation of the news when they had axes to grind.

Toby, surely you don't intend to compare Luce, Hearst or even Black to Levant.

Dana said, "Toby, surely you don't intend to compare Luce, Hearst or even Black to Levant."

Of course not. I just question muzzling journalists, even questionable ones. As you are aware, we get way too much hype masquerading as information; the occasional brick through a window isn't necessarily bad.

If Levant was a journalist I'd agree with you. And the idea that the occasional brick through a window not being necessarily a bad thing is what enabled Trump.

I think the point, Toby, is that the summit organizers are swamped with accreditation requests. They accommodate 3,000 journos as it is. Others they have to turn down. Levant's outfit is, at best, a sort of editorial shop. It's not a news site, more of a commercial blog. That type of agenda-driven messaging masquerading as journalism has already caused considerable damage to the effort to respond to climate change. Those who deny the existence of climate change as a hoax perpetrated for ulterior motives are not journalists. That goes for Rebel Media.