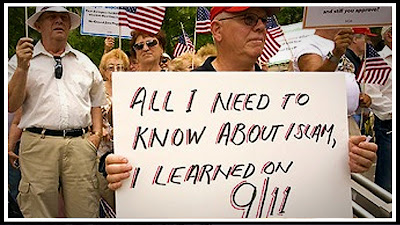 Hmm, why does the name Kellie Leitch come to mind?

Islamophobia has become a hallmark of Amerika's ascendant radical right. 90 years ago in Europe, it was the Jews. In 21st century Amerika, it's Muslims that are the firewood to fuel the very worst varieties of nationalist populism. Foreign Policy calls it "Islamophobia Inc."

The subject of the article is Jonathon Brown, a convert to Islam and professor of Islamic studies at Georgetown.

Brown’s attempts to explain the faith have made him a hate figure for the American right. A flood of articles accuse him of being an apologist for slavery and rape. His family has received death and rape threats.

It all started with good intentions. Brown is one of the majority of Muslims around the world who believes the Islamic State practices a warped interpretation of Islamic thought that blesses slavery, rape, and other crimes. But Brown also knows that not all Muslims are so quick to dismiss the jihadi group’s theology. Certainly the hundreds of foreign fighters who have trickled into Syria and Iraq to join its ranks find its ideas seductive.

But Brown felt that he was called to try, hence his public lecture at the International Institute of Islamic Thought in Herndon, Virginia, on Feb. 7. In the first of what he intended as a three-part series, Brown addressed slavery in Islam, hoping to combat the idea that Islam could ever condone the subjugation and exploitation of human beings.


That was when he encountered a cacophony of a different sort — America’s far-right, anti-Muslim ecosystem that has adopted the same twisted interpretations of Islam that the Islamic State promotes. After the lecture, Brown endured a cascade of online attacks from conservative and alternative-right heavyweights such as Ann Coulter, Robert Spencer, and Milo Yiannopoulos, who claimed that he had actually condoned the acts he had set about to condemn. His university department was flooded with demands that he be fired.

Brown is the victim of an increasingly empowered industry of Islamophobia that constricts the space for balanced and open dialogue, sidelining the very Muslims who are doing the most to promote peaceful, orthodox interpretations of Islam. The United States has powerful protections for speech and religious liberty that have allowed faith traditions to hammer out their theological debates in a free and protected environment. But a targeted network now seeks to deny Muslims that freedom and to treat Islam as a dangerous political ideology rather than a religion — and, like the McCarthyites of the 1950s, to silence and discredit any Muslims who disagree.
...

The United States once battled its own militant pseudo-state that invoked religion to justify institutionalized slavery. “[Slavery] was established by decree of Almighty God,” said Jefferson Davis, the president of the Confederate States of America. “It is sanctioned in the Bible, in both Testaments, from Genesis to Revelation … it has existed in all ages, has been found among the people of the highest civilization, and in nations of the highest proficiency in the arts.”

The Gettysburg Museum of History in Pennsylvania describes the Civil War as a “theological crisis” in American Christianity. One exhibit features an 1857 pamphlet called “Slavery: Ordained of God,” written by the Rev. Fred A. Ross of Huntsville, Alabama. Nearby is a painting of John Brown, the famed Christian abolitionist, holding a Bible in one hand and a gun in the other.
...

What Brown was attempting to do was build a bridge for American Muslims between their sacred scripture and their human rights sensibilities, as many Christian thinkers before him have done. For his efforts, he attracted the attention of an Islamophobic ecosystem designed to marginalize any Muslim who speaks out. Brown’s straightforward academic lecture was quickly transformed into fodder for a flood of unscrupulous articles painting him as someone who “justifies slavery and the rape of female slaves,” leaving him with a horrific online footprint that is likely to trail him for decades.

In the years after 9/11, a small but powerful network of funders and ideological activists has waged a major misinformation campaign, seeking to cast Islam as a diabolical threat that must be eradicated. Their concerted efforts have resulted in an influential infrastructure of websites, activists, lawmakers, and grassroots organizations that hold sway in municipal councils and state legislatures — and now have the ear of the president of the United States.

Between 2001 and 2009, seven charitable foundations donated $42.6 million to think tanks that promoted anti-Muslim rhetoric, as a 2011 report by the Center for American Progress revealed. These organizations include Frank Gaffney’s Center for Security Policy; Stop Islamization of America, founded by Pamela Geller and Robert Spencer; the website Jihad Watch, directed by Spencer; and the David Horowitz Freedom Center, which hosts Jihad Watch. These organizations came up with several talking points about Islam that they promoted among lawmakers, grassroots networks, and the Christian right. Chiefly among these ideas was the belief that sharia, or Islamic law, is a totalitarian political ideology that presents the greatest domestic threat facing the United States today; that the Muslim Brotherhood, a loosely organized international Islamist movement, has infiltrated the U.S. government; and that Islam commands believers to lie about their motives. In other words, no Muslim can be trusted; you must infiltrate their private spaces to learn what they think.

This campaign has been wildly successful. Gaffney is now a senior advisor to the Donald Trump White House. Gaffney’s influence extends throughout the administration. Kellyanne Conway, who ran Trump’s campaign and now serves as counselor to the president, managed polling for the Center for Security Policy. Stephen Bannon, former head of the alt-right website Breitbart and now White House chief strategist, frequently invited Gaffney to appear on Breitbart’s radio show.

American Muslims are reacting to forces far beyond their control — a feverish paranoia that echoes the anti-Communist Red Scare in the decade after World War II. Virtually any Muslim who has chosen to speak out or to become active in politics has faced a torrent of similarly unscrupulous smearing.

Ideologues are seeking to marginalize Muslims by making their speech and their activism relating to their religion come at a very high price. They believe that Muslims are malevolent, duplicitous, and dangerous, and these Islamophobes will bend the truth to fit their claims. In the process, they are denying Islam the same functional rights that Christianity enjoys and silencing the very people best poised to reconcile Islam with modern American life. Which may be the very point.
Posted by The Mound of Sound at 10:11 AM

I can only imagine that ISIS enjoys the spectacle of right-wing American extremists doing their job for them, Mound. I wonder if any of the latter consciously realize their marginalization and vilification of Muslims achieves the kind of alienation and recruitment fodder the Islamic state craves; something tells me that even if they do, it will not change the hatred and obscene zealotry that lurks in their hearts.


Lorne, the final line of the last paragraph I posted is pretty accurate - this is all quite deliberate. Bannon appeared at the Vatican a couple of years ago where he called for an all-out war between Christendom and Islam. Inciting extremism is their goal.

Notice that Trump is saying the exact same thing about Muslims that Hitler said about the Jews? Just watch Trump put Muslims in concentration camps to deal with the 'Muslim problem' before the end of his first term! The Muslim Holocaust has already begun!

I have noticed that, Anon. However, unless Trump manages to subvert the U.S. Constitution, I'm hopeful the courts will continue to restrain his authoritarian instincts.

Als twee honden vechten om een been, loopt de derde er mee heen.
When two dogs fight over a bone, an unsuspecting dog will creep up and carry the bone away.
Cui bono? For sure not Russia nor China...
A..non

The religion of peace named Islam is one among the mightiest religion in this world. And also the one that is misunderstood a lot for several reasons. Be it a propaganda of political or of economical unfolded at all times. Our mission is to spread truth about islam by clearing entire misconceptions and to disseminate virtuous good deeds that the Muslims actually practice.