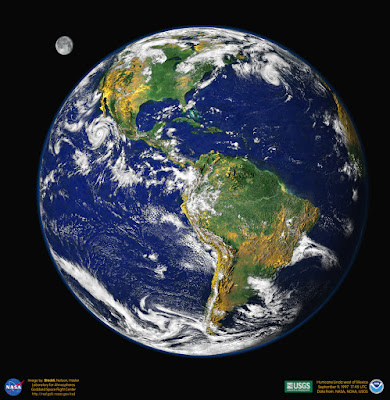 One of the lesser known aspects of climate change is the role played by oceans as a "heat sink." Oceans absorb a lot of heat from the atmosphere with currents and prevailing surface winds sometimes driving that captured heat deep into the ocean depths.

We might think that oceanic heat goes down into the cold depths and just disappears only it doesn't. The first law of thermodynamics, the law of conservation of energy, holds that energy can not be created or destroyed. It can merely be converted from one form to another. In other words oceans absorb that surface energy, heat from direct sunlight and from the warming atmosphere, and, in the right circumstances, store it in very deep water until, again in the right circumstances, it may be returned to the surface. This stored ocean heat is believed to be a driving force behind the Pacific Decadal Oscillation.

Climate scientists have been keeping a close eye on ocean temperatures, especially the rapid pace of ocean warming. Their concern is that a powerful positive phase could see much of that heat energy released back into the atmosphere creating a big spike in global warming.

The science types now have even more cause for concern.  A new study finds that the oceans are warming 13% faster than previously estimated and that the rate of increase is accelerating.


Since about 2005 a new type of sensing device has been deployed (the Argo float system). These floats (approximately 3500 in total at any time) are spread out across oceans where they autonomously rise and fall in the ocean waters, collecting temperature data to depths of 2000 meters.

When they rise to the ocean surface, they send their data wirelessly to satellites for later analysis. Hence we can now map the ocean heat content quite well. But what about the past, when we mainly had measurements from expendable bathythermographs deployed mainly along major shipping routes and largely confined to the northern hemisphere? Putting data from these various sensors together has been a struggle and has been a major impediment to an accurate quantification of the ocean’s temperature history.
...

"We know that ocean observations were very sparse until the Argo era. There were major gaps in data, particularly in the Southern Hemisphere. Our challenge was to assess the changes to global ocean heat and fill data gaps. A major issue is to ensure gap-filling is reliable. It is this issue that motivated the study. We proposed an advance gap-filling strategy and used it to attain near global coverage. We rigorously evaluated the reliability of our approach and as a result, we have much higher confidence that the ocean and the Earth are warming at a faster rate than previously thought."

One of the co-authors, John Fasullo added:

"This study shows that more heat is likely to have been absorbed by the oceans over the past 50 years than had previously been reported. With upward revisions in our estimates of the climate’s sensitivity to greenhouse gases and the associated resultant sea level rise."

"we know the oceans are much warmer now and they contain the memory of climate change. Higher sea surface temperatures are continually reinforced by the extra heat beneath the ocean surface. The oceans are affecting weather and climate through more intense rains. This process is a major reason why 2016 was the hottest year ever recorded at the Earth’s surface, beating out 2015 which was the previous record. Additionally 2015 was a year with record hurricanes, heat waves, droughts, and wild-fires around the world."

The knowledge about how the ocean has warmed, and how the warmth has spread in depth and over the different oceans is consistent with theory and models, and grounds the theories of human-induced climate change. The memory of past warming is in the oceans, and even though there are weather events that alter the details daily, the atmosphere above the oceans is warmer and moister than it used to be.

It is these changes that affect storms, such as the deluges that have recently affected California, or which have led storms to produce “thousand year floods” as has been seen in the Carolinas with Hurricane Matthew, or the Louisiana floods in August last year, or the Houston floods in April, and so forth. This kind of knowledge and understanding has profound consequences.

Of course this new data on the degree and rate of ocean warming means a lot of other temperature based projections, notably sea level rise, will have to be recalculated - and not in a good way.

The more we learn about these interactions, Mound, the more we should be humbled both by their complexity and our absolute powerlessness in their face. Of course, the latter never seems to happen, does it?


We're not absolutely powerless, Lorne, but we stubbornly refuse to avail ourselves of the options that remain to us. Justin Trudeau is a prime example. At every turn he places his short-term, partisan political interests over the medium- and long-term interests of the country. And, by and large, the Canadian public goes along with that. I doubt that he would be such an inveterate fossil fueler if he thought he would pay dearly for it at the next election.

When it comes to climate change, whether in the context of adaptation or mitigation measures, we are profoundly asleep at the switch.

You are not going to like this...
The only way things will change, for the better, is by the election of a benevolent dictator.

Leaving the awkward and unpopular decisions to , so called, democracy is too late, too cumbersome and an act of faith.

In the last two months we have seen the USA and the UK do into meltdown mode; both the countries leaders have rejected climate change initiatives.
Without these influential countries on board we will have the long wait until China becomes more influential on world politics.
By then, I fear, it will be too late to stop runaway global warming.

The best I can hope for ,during my so called, golden years, is that society will eventually turn on the enablers of global warming and nail them to the nearest friggin tree; kind of like McCarthyism!