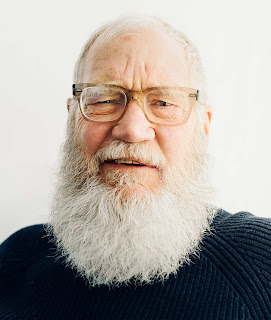 My parents generation had Jack Paar, Steve Allen and Johnny Carson. My generation had Letterman and Leno. Today it's Kimmel, Corbin, Fallon and Meyers.

The new crop are pretty good but I still think Letterman is a notch above. Which is why I devoured the New York Magazine interview with Dave in which he lays into Trump and Company.  A few excerpts:

Donald Trump can be Donald Trump, but if he doesn’t help the people that need help, then he’s just a jerk. That press conference that he held berating the news media? I mean, how do you build a dictatorship? First, you undermine the press: “The only truth you’re going to hear is from me.” And he hires the Hunchback of Notre Dame, Steve Bannon, to be his little buddy. Bannon looks like a guy who goes to lunch, gets drunk, and comes back to the office: “Steve, could you have just one drink?” “Fuck you.” How is a white supremacist the chief adviser to our president? Did anybody look that up? I don’t know.

Kellyanne Conway was my favorite for a long time. This thing about her telling everyone, “Go buy Ivanka’s shoes; I’m going to go buy Ivanka’s shoes. Hell, I’ll buy you a pair of Ivanka’s shoes.” Then they had to counsel her. Boy, if this administration decides you need counseling — whoa. And poor Sean Spicer is a boob who just got out of a cab and now here he is. Then the other kid, is it Miller?

Wow, that guy [Miller] is creepy. He fell out of a truck. And the guy from Exxon, Rex Tillerson. Don would say, “Rex, if you’re talking to your friends, ask them” — I’m sure the Russians groomed Trump. They gave him tips: “You want to be an authoritarian dictator? Sure, that’s not a problem. We’ll tell you how to do it, for God’s sake.” I think it was just all like that, because that’s the way Trump does business: “See if they’ll give us the tar coating? They’ll throw that in? Great, great. And by the way, we’re not paying the last 10 percent of the bill.” I think it’s the same shit.

If he could do just one more show, it'd be all Trump.

I would just start with a list. “You did this. You did that. Don’t you feel stupid for having done that, Don? And who’s this goon Steve Bannon, and why do you want a white supremacist as one of your advisers? Come on, Don, we both know you’re lying. Now, stop it.” I think I would be in the position to give him a bit of a scolding and he would have to sit there and take it. Yeah, I would like an hour with Donald Trump; an hour and a half.
Posted by The Mound of Sound at 10:06 AM

I read the article yesterday and found it richly rewarding, Mound. I would recommend it to all.