And So, I Told My American Friends Who Used to Mock Obama. Oh, Here, Just Read the Email. 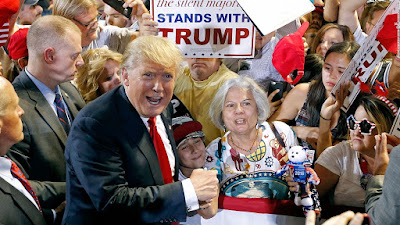 Just days away from two months of Trumpland. How’s that going anyway?

It doesn’t seem to be going too well for el presidente himself. The guy’s already looking worn out, like a bag of hammers, and those pre-dawn tweets suggest a mind that’s not firing on all cylinders. People are beginning to suggest that the boss may be a limo ride away from the Laughing Academy. Sad, very sad. Nixon at least was “scare the living shit out of Hanoi” crazy.

For all of that he’s certainly generating plenty of work for Nikki Haley, Mike Pence, Rex Tillerson and James Mattis as they travel far and wide from Asia to Europe telling folks to ignore Trump’s deranged babbling. They – all of ‘em – call the boss a bullshitter AND they keep their jobs. Donald is the best bullshitter you’ve ever known. Nobody is a better bullshitter than the Donald. He’s got all the best bullshit. Do you get the faint whiff of Charlie Sheen on crystal meth?

Apparently ISIS is still around. Maybe they didn’t get the message that Trump was going to rid the world of these murderous swine within 30 days of assuming office. The Iraqis are slowly pushing them back but, like al Qaeda, they’re popping up elsewhere. Let’s hope Trumpy gets on with their extermination pretty soon.

Then there’s that wall on the Mexican border. How’s that going? Do you know that Erwin Rommel built the Atlantic Wall, Festung Europa, in just two years and it stretched all the way from the southern coastline of Norway to the border between France and Spain and it included beach obstacles, minefields, wire, machine gun nests,  trenches  and massive concrete bunkers for coastal artillery emplacements? Two years. The best part is that a lot of it was built by forced labour from the occupied countries so, in effect, Rommel got those territories to pay for it. Festung Amerika doesn’t seem to be getting off the ground.  Sad, very sad.

At this point Hillary was supposed to be in an orange jump suit with a tray in hand lining up for lunch in some prison cafeteria. Remember when Mike Flynn led the “lock her up, lock her up” chant at Trump rallies? Now it’s Flynn, the undisclosed “foreign agent” who’s looking at felony time. 23-days and out as NSA. A record. I never watched Trump’s reality show but I assume most of the contestants must have lasted longer than Flynn held onto his office. Sad, so sad.

Then there’s the failing Jeff Sessions. What’s with that guy?

With this crushing workload it’s a good thing Trumpy was able to hand over the businesses to the kids, ‘Tardo Junior and Ambergris. I’m sure they’ll do fine.

If all that wasn’t enough, now it’s on to scrapping Obamacare and replacing it with Trumpcare. He’s already got the slack-jawed, mouth-breathing Gullibillies who handed Trump the presidency and the Repubs both houses of Congress up in arms now that they figured out that the Affordable Care Act and Obamacare were just two names for the same thing. They’re howling like cut cats now they realize their healthcare is heading straight down Paul Ryan’s shitter. Well at least that’ll free up room for more tax cuts for the rich.

It’s not all bad. Vlad Putin is happy. He’s loving the chaos that’s spreading across the U.S. and Europe. Making Russkie hay while the sun shines. Along with the Chinese, they’re moving in to the Middle East – big time or, as Trumpy would put it, "bigly." Nervous Euros are also looking a bit more kindly on Moscow, not that they’ve got a lot of choice.

Meanwhile the Chinese are beginning to consolidate their sphere of influence across Asia Pacific. The big, unmentioned issue is the dismemberment of the Monroe Doctrine. China’s biggest banks are now the number one and number two lenders to Latin America. America’s influence across the western hemisphere is oh so gradually evaporating. Latin America and, for that matter, the rest of the world – failing, so overrated.


This is like so awesome. All of this in less than two measly months. Just imagine what Trump can do to America in four years? Wowser.
Posted by The Mound of Sound at 3:52 PM

No argument about how bad tRump is, for America and the world and I'd much prefer to see (for ex) Gorbachev not Putin in power in....

But Mound, why are you still on the blame-Putin-meme that includes dissing St. Julian? ;-)
http://www.counterpunch.org/2017/03/10/wikileaks-latest-cia-data-dump-undermines-case-against-russia-election-hack/

oh and more food for thought (esp. when we consider the Russia-phobe who is our current Foreign Minister)
http://www.counterpunch.org/2017/03/10/why-everybody-but-nato-lives-happily-with-russia/

finally, from the same source, a funny look at how it may be Putin who brings down tRump.
"In compromising Trump, Russia again will become a straw man—an imagined nation of double agents, loan sharks, inside traders, hit men, and rounders looking for a friendly game in Atlantic City. Whether Russia has a historic claim to eastern Ukraine or Crimea will not be under discussion, nor will Putin’s aspirations in the Baltic or the Caucasus.

The only question on the table will be the presumed fallen innocence of American democracy and that of the compromised virgin republic, which, clearly, those lowlifes Trump and Putin will have taken for a joy ride in Brezhnev’s Cadillac."
http://www.counterpunch.org/2017/03/10/91103/

.. its the complete deceit of El Trumpo University being executed upon a humungous scale.. the entire USA is now paying Trumph to 'get educated. He only paid 25 million for screwing his students over completely.. but don't expect any future settlement for the scam he and the great America. political system are pulling off currently.. The money is already flowing to Trumph.. bigly.

And remember.. the population of the Free & the Brave.. is about 4% of the world population.. but they consume over 80% of the world's opioids.. so the USA is truly the Home of the Pain Free - Dazed and Confused.. ripe and ready for the Political Grifters like Steve 1% Bannon et al

80% of the world's opiods? That's pretty troubling. I've seen the 60 Minutes segment on travelling "pain clinics" in the southeast, especially Florida, where addicts go to score prescriptions for oxycontin, etc. Then again I guess if you can't afford hip surgery you have to do something to dull the pain.

"I guess if you can't afford hip surgery you have to do something to dull the pain." While on a waiting list in Canada... which is second in the world in opioid consumption per capita...
http://globalnews.ca/news/2899965/canada-ranked-second-in-world-for-per-capita-opioid-use/
A..non