The Biggest of Big-Tent Moments 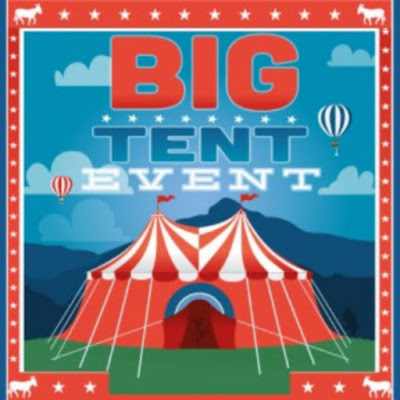 Chances are you've read at least a couple of them: Sinclair Lewis' "It Can't Happen Here," George Orwell's "1984," Aldous Huxley's "Brave New World," Hannah Arendt's "The Origin of Totalitarianism," or Margaret Atwood's "The Handmaid's Tale." John Pfeffer, author of "Splinterlands" and director of Foreign Policy in Focus at the Institute for Policy Studies writes that dystopian novels won't pull America out of the Trump crash dive. It's time to win back Trump voters awash in buyer's remorse.


I took a course in college on the rise of Nazism in Germany. At one point, the professor showed us Triumph of the Will, Leni Riefenstahl’s famous 1935 documentary that covered the Nazi Party Congress of the previous year and featured extensive footage of Adolf Hitler addressing the faithful. Triumph of the Will was a blockbuster film, our professor assured us. It spread the name of Hitler worldwide and established Riefenstahl’s reputation as a filmmaker. It was so popular inside Germany that it ran for months on end at movie theaters, and people returned again and again to watch it. Our teacher promised us that we would find it fascinating.

Triumph of the Will was not fascinating. Even for students engrossed in the details of the Nazi surge to power, the nearly two-hour documentary was a tremendous bore. After it was over, we bombarded the teacher with questions and complaints. How could he have imagined that we would find it fascinating?

He smiled. That’s the fascinating part, he said. Here was this extraordinarily popular film, and it’s now nearly impossible for Americans to sit through the whole thing. He wanted us to understand that people in Nazi Germany had an entirely different mindset, that they were participating in a kind of mass frenzy. They didn’t find Nazism abhorrent. They didn’t think they were living in a dystopia. They were true believers.

Many Americans are now having their Triumph of the Will moment. They watch Donald Trump repeatedly without getting bored or disgusted. They believe that history has anointed a new leader to revive the country and restore it to its rightful place in the world. They’ve been convinced that the last eight years were a liberal dystopia and what is happening now is, if not utopian, then the first steps in that direction.

A hard core of those enthralled by Trump cannot be convinced otherwise. They hold liberal elites in contempt. They don’t believe CNN or The New York Times. Many subscribe to outlandish theories about Islam and immigrants and the continuing covert machinations of that most famous “Islamic immigrant” of them all, Barack Obama. For this hard core of Trump supporters, the United States could begin to break down, the economy take a nosedive, the international community hold the leadership in Washington in contempt, and they will continue to believe in Trump and Trumpism. The president could even gun down a few people and his most fervent supporters would say nothing except, “Good shot, Mr. President!” Remember: even after Nazi Germany went down in fiery defeat in 1945, significant numbers of Germans remained in thrall to National Socialism. In 1947, more than half of those surveyed still believed that Nazism was a good idea carried out badly.

But plenty of Trump supporters -- whether they’re disaffected Democrats, Hillary-hating independents, or rock-ribbed Republican conservatives -- don’t fit such a definition. Some have already become deeply disillusioned by the antics of Donald J. and the demolition derby that his advisers are planning to unleash inside the U.S. government, which may, in the end, batter their lives badly. They can be brought over. This is potentially the biggest of big-tent moments for launching the broadest possible resistance under the banner of a patriotism that portrays Trump and Bannon as guilty of un-American activities.

And it’s here in particular that so many dystopian novels provide the wrong kind of guidance. Trump’s end will not come at the hands of a Katniss Everdeen. A belief in an individual savior who successfully challenges a “totalitarian” system got us into this crisis in the first place when Donald Trump sold himself as the crusading outsider against a “deep state” controlled by devious liberals, craven conservatives, and a complicit mainstream media. Nor will it help for Americans to dream about leading their states out of the Union (are you listening, California?) or for individuals to retreat into political purism. Given that the administration’s dystopian vision is based on chaos and fragmentation, the oppositional response should be to unite everyone opposed, or even potentially opposed, to what Washington is now doing.

As readers, we are free to interpret dystopian fiction the way we please. As citizens, we can do something far more subversive. We can rewrite our own dystopian reality. We can change that bleak future ourselves. To do so, however, we would need to put together a better plot, introduce some more interesting and colorful characters, and, before it’s too late, write a much better ending that doesn’t just leave us with explosions, screams, and fade to black.


Re,
A belief in an individual savior who successfully challenges a “totalitarian” system.

Any country who's mantra includes god and faith based decisions is in deep shit.
It's time to quit looking for 'saviours' instead of accepting reality and dealing with it.

That one individual or belief will save the world is often a scapegoat for protecting our own turf at the expense of others whilst claiming the moral high ground.

.. all that remains as far as validating your article
is to encourage folks to examine Sandy Hook Deniers..
especially the proactive, highly disturbed deniers..
especially the ones who maliciously attack the victims parents..
you know, park outside their homes, work locations
stare at any of their other children, phone & email them
write about them - as phonies, children never died.. etc
Its all just a vast conspiracy.. blah blah..

What of their children, if any? Do they beat them?
Do they lecture them on wisdom & reality? Fantasy?
Is it to laugh or to weep at how disgusting these factions are?
Ready to seize on microwaves that spy on Trumph
or whatever mad faux fantasy catches their fancy..

Welcome to Amerika eh.. its disintegrating .. rotting
but here to save the day is the great realtor.. Trumph
and Steve Bannon & Kellyanne, and Sean Spicer..
the knights round table of Crusaders vs the infidels..
sheesh .. .. .. ..