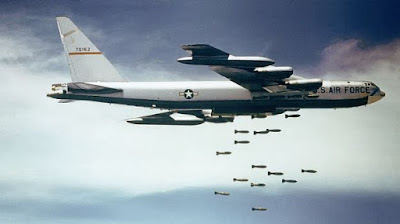 In the course of America's ill-fated war in Viet Nam, U.S. forces lavished half a million tonnes of high explosives on the territory of Cambodia.  By one count, America's carpet bombing claimed the lives of 500,000 Cambodians.

Now the United States of Trump wants bygones to be bygones, just as soon as
Cambodia repays a 550-million dollar war debt, the current value of what began as a $274 million loan for food supplies.

William Heidt, the US's ambassador in Phnom Penh, said Cambodia's failure to pay back the debt puts it in league with Sudan, Somalia and Zimbabwe.

"To me, Cambodia does not look like a country that should be in arrears…buildings coming up all over the city, foreign investment coming in, government revenue is rapidly rising," Mr Heidt was quoted as saying by the Cambodia Daily.

Apparently Ambassador Heidt isn't interested in talking reparations for the death and destruction the U.S. lavished on Cambodia and its people during the Viet Nam war.

"I'm saying it is in Cambodia's interest not to look to the past, but to look at how to solve this because it's important to Cambodia's future," he said, adding that the US has never seriously considered cancelling the debt.

Of course the United States doesn't want to look to the past but, then again, it doesn't want to look to the future either. Why, if it started negotiations with Cambodia for its years of relentless carpet bombing in that country, next thing you know the Vietnamese would be at the door looking for a mega cheque for the ongoing deaths, birth deformities and mutilations caused by spraying Agent Orange in that country. If you can stomach it, here's the Americans' handiwork that is expected to persist for up to 600 years. Coincidentally, here's a story from today's Daily Mail about Vietnam's endless agony.

Reminds me of what France did to Haiti. From Wiki:

Haiti’s legacy of debt began shortly after gaining independence from France in 1804. In 1825, France, with warships at the ready, demanded Haiti compensate France for its loss of men and slave colony. In exchange for French recognition of Haiti as a sovereign republic, France demanded payment of 150 million francs. In 1838, France agreed to reduce the debt to 90 million francs to be paid over a period of 30 years to compensate former plantation owners who had lost their property. The modern equivalent of $21 billion was paid from Haiti to France.

"Now the United States of Trump..." Why bother to play your trump card everywhere? Looks to me suspiciously close to the obsession...
A..non

Bizarre. There have been wedges needlessly driven between many Asian countries and the United States (Malaysia, Philippines). Why help China become a hegemonic power?

It has a quasi-colonialist nature to it. As Chris observes, it's "needlessly driving" wedges between the U.S. and Asia. Trump appears to ignore the short and long-term value of these regional relationships if it's something he can't immediately monetize.