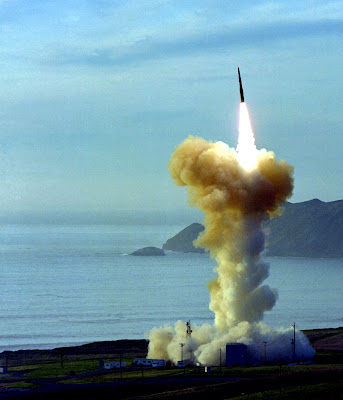 You might find this a bit unsettling. The latest thing in nuclear war is cyber warfare, hacking an enemy's control systems to either disable his nuclear deterrent or, worse, launching his missiles.  From The New York Times:


In 2010, 50 nuclear-armed Minuteman missiles sitting in underground silos in Wyoming mysteriously disappeared from their launching crews’ monitors for nearly an hour. The crews could not have fired the missiles on presidential orders or discerned whether an enemy was trying to launch them. Was this a technical malfunction or was it something sinister? Had a hacker discovered an electronic back door to cut the links? For all the crews knew, someone had put all 50 missiles into countdown to launch. The missiles were designed to fire instantly as soon as they received a short stream of computer code, and they are indifferent about the code’s source.

It was a harrowing scene, and apprehension rippled all the way to the White House. Hackers were constantly bombarding our nuclear networks, and it was considered possible that they had breached the firewalls. The Air Force quickly determined that an improperly installed circuit card in an underground computer was responsible for the lockout, and the problem was fixed.

But President Obama was not satisfied and ordered investigators to continue to look for similar vulnerabilities. Sure enough, they turned up deficiencies, according to officials involved in the investigation.
...

Cyberwarfare raises a host of other fears. Could a foreign agent launch another country’s missiles against a third country? We don’t know. Could a launch be set off by false early warning data that had been corrupted by hackers? This is an especially grave concern because the president has only three to six minutes to decide how to respond to an apparent nuclear attack.

This is the stuff of nightmares, and there will always be some doubt about our vulnerability. We lack adequate control over the supply chain for nuclear components — from design to manufacture to maintenance. We get much of our hardware and software off-the-shelf from commercial sources that could be infected by malware. We nevertheless routinely use them in critical networks. This loose security invites an attempt at an attack with catastrophic consequences. The risk would grow exponentially if an insider, wittingly or not, shares passwords, inserts infected thumb drives or otherwise facilitates illicit access to critical computers.

Warning shots have already been fired in Iran, Vermont, Ukraine and the US. Utilities, industrial sites, artillary units, private companies have been hacked by both government and freelancers.

All the fuss over Frigates, Nato percentages and fighter jets is just yesterdays men fighting the last war. Hackers are cheaper and can do as much damage as a military.

The next war will be fought in cyberspace.

As the Americans and Israelis showed in their StuxNet attack on Iran and its nuclear installations, cyber warfare can be devastating. Can it kill? In the right circumstances, yes.

That's why some US commanders have urged that cyber-attacks on America be treated as conventional military attacks on "the homeland."