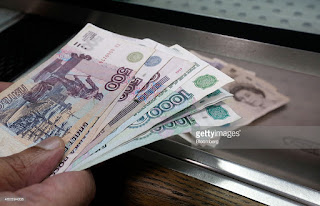 If he hasn't done anything else useful we can thank Donald Trump for finally shining a light on Russia's dirty money.

For years there have been stories about Cyprus and how the Russian oligarchs were using it as a conduit to transmit rubles to the West for laundering.  Still few eyebrows were raised when Trump chose the former vice-chairman of the Bank of Cyprus, Wilbur Ross, as his commerce secretary.

There have been reports about how a mountain of Russian dirty money made its way to giants of the European banking system, troubled Deutsche Bank in particular and Trump's extensive dealings with that bank are well known.

The Guardian reports that dirty money from Russia also flowed into British banks. A follow up piece in today's paper has the head of Britain's National Crime Agency money laundering unit, David Little, claiming that the Russians are not cooperating with their efforts to find out where that money is from.

In an interview with the Guardian, David Little said: “The amount of Russian money coming into the UK is a concern. “One, because of the volume. Two, we don’t know where it is coming from. We don’t have enough cooperation [from the Russian side] to establish that. They won’t tell us whether it comes from the proceeds of crime.”
...

Detectives have exposed a money laundering scheme, called the “Global Laundromat”, that was run by Russian criminals with links to their government and the former KGB.

Roman Borisovich, a former banker and anti-corruption campaigner, said the British government needed to do more to end offshore secrecy. It should identify the real owners of offshore companies doing business or owning assets in the UK.

“In Russia I have witnessed an entire shadow industry of money laundering engineered by professional financiers and operated by organised criminal groups under the Kremlin’s watchful eye,” he said.

According to the Central Bank of Russia, capital flight out of Russia during the Vladimir Putin years exceeded $1tn, he said. “We have no idea yet how the other $900m got across the Russian border – but rest assured they ended up in the same banks.”

If Trump is brought down, his reported dealings with Deutsche Bank and Russia's oligarchs could play a big role. Remember it was tax evasion that took down Capone.

Another Guardian piece about the Global Laundromat, Deutsche Bank and Donald Trump.

Law enforcement agencies are investigating how a group of politically well-connected Russians were able to use UK-registered companies to launder billions of dollars in cash. The companies made fictitious loans to each other, underwritten by Russian businesses.


The companies would default on these “debts”. Judges in Moldova then made court rulings enforcing judgments against the firms. This allowed Russian bank accounts to transfer huge sums to Moldova legally. From there, the money went to accounts in Latvia with Trasta Komercsbanka.

Deutsche, Germany’s biggest lender, acted as a “correspondent bank” for Trasta until 2015. This meant Deutsche provided dollar-dominated services to Trasta’s non-resident Russian clients. This service was used to move money from Latvia to banks across the world.

The world is full of dirty money.
Money from crime, money running way from taxation and more and more money looking to make interest in this world of flat returns on the invested dollar.

The dirty money is also waiting for the next downturn and economic crash so as to scoop up devalued assets and therefore control Government and the economy even more!

I think it's worse than you illustrate, Mound. The important thing to understand is that the worst corruption is that which is legal and slightly out of sight.

.. its become apparent that common terms such as 'organized crime' don't begin to include the players, politicians & criminals.. who don't fit the standard perceptions, stereotypes or imagery. On so many levels one can identify these newer models of criminal as well as the older versions who have burrowed deep into society. How else does one define bribery? Or state supported legislation to profit the wealthy or the crooked? Where there is a payoff or twisted transaction, you have profit.. and unlikely the perps or systems will be caught.

Trump et al are just one of the more visibly greedy.. and stupidly so. The governmental systems at all levels beg for such exploitation. Resources - Big Energy etc are certainly near top of the list with Stock Markets - Finance .. the sleazy blurred line of quid pro quo is a complex system & a 'long game' played by big biz and public servants. Its become so prolific. we barely notice.. or understand.

Without elaborating, I would remind folks of Papal Collaboration with the Nazis.. ah yes.. Organized Religion had a gigantic vested interest in many many things.. that crossed border & exchanged favors.. Nothing has really changed. Now we see the Koch brothers, Stephen Harper, the former Kennedy power structure, the Saudis.. and now the Trump sellout.. and other Johnny come Latelies.. of lesser note.. but its always about power & money.. and the nod nod wink wink deals to empower & enrich big business ..