Wall, Wall, Who Gets the Wall? 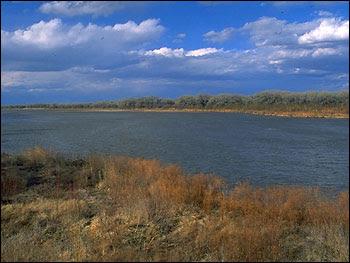 Trump's interior secretary, Ryan Zinke, has stumbled across a problem with the Cheeto Benito's plan to wall off Mexico from the United State - a wall works two ways.

Zinke didn’t elaborate on how the wall would get built if it wasn’t located on America’s side of the Rio Grande or in the middle of the river, which implies that it would be built on the Mexican side of the border.

Like most things that carry the Trump name, this wall idea's expensive and half-baked. It will solve absolutely nothing.

Unless you favor immigration anarchy you're actually a "racist misogynist homophobic fascist." (Canadians get to have their racist fascist cake and eat it too.)

Anon, stop being a total asshole. Immigration anarchy, really? Is that the best your overheated mind can do? This is about your moronic president and his harebrained ideas. Even his own interior secretary thinks the idea is half-baked (the half along the Rio Grande).

It would be possible to build a wall that wouldn't be breached and for a lot cheaper than that proposed. All that would be needed is several rows of razor wire backed by regularly spaced machine-guns with automatic firing and the will to use it. At the moment I can't see very many Americans justifying that extreme. Not even most politicians want any sort of wall. There are a great many immigrants legally in the US with sympathy for refugees and they represent too many votes to ignore.

I don't understand what the problem could be. Ever since Simpson-Mazzoli the authorities haven't had any difficulty in summoning up the will to chase Canadian wetbacks off or in penalizing the offending dispatch halls as a deterrent to other agencies.

(Actually, I do understand.)

A literal wall is a boneheaded idea. But my guess is that they could secure the border with satellite and drone surveillance and support it with mobile border security teams (in remote areas.)

If the US had proper border security, it could nationalize most illegals, have more room for legal immigration for people who follow the rules and deserve it, and save money from rounding up and deporting illegals. (Even the "progressive" Obama deported 2.5-million illegals over his 8 years. That's a lot of time and money wasted. Cheaper just to secure the goddamn border.)

Europe, on the other hand, is a zoo. They have complete open borders across all member countries. (Which Hillary and establishment oligarchs want to bring to the Americas.) Illegals cross through Turkey and can go where ever they want. (Euro-oligarchs use them to outsource jobs internally. Canada is stuck with TFW red tape.)

I prefer that the number of immigrants coming into a country is determined by the people; and that immigrants that do come into the country are properly vetted – even for constitutional values. (Which doesn't sound unreasonable to me given some of the crazy tribal culture that is out there: i.e., patriarchal bullying of females, female genital mutilation, honor killings over the most absurd things, etc.)

Progressives call this position "racist fascist." But in reality, their position is senseless and amounts to nothing more than virtue signaling (while never lifting a finger to actually help minority races) and vicious hateful partisan rhetoric.

(One thing about partisan rhetoric partisans tend to forget: it only works if they are fooling the public with it, not themselves.)

Look, the thing is that nobody who matters wants to end illegal immigration. Certainly nobody on the right. The point isn't not to have them. Where would we get gardeners and fruit-pickers and on and on and on? We'd have to hire whites, and they might want to get paid! Horrors.
No, the point is to have plenty of them but make sure they're running scared. No human rights, no security, able to be thrown out any time they get uppity. And that requires some demonization. Then you've got a nice, pliable underclass you can profiteer off in peace and, as an added bonus, pit other groups against! And with a lot of luck maybe they'll actually add to unemployment, or at least underemployment, although the research on that one is mixed. And unemployment, as we all know, keeps wages and inflation down, both of which are good for profits. Win-win-win! Nobody wants to ruin the party by actually stopping the illegal immigrants from coming in.

So the point isn't to build a wall. It's to talk about building a wall, about how illegal immigrants are such a huge threat, about how local non-brown people ought to be getting them some posses together, about anything but how much dough local capitalists make from hyperexploiting them.

I'm with Toby on that link. Thanks, Dana. Some of it I had picked up from other sources over the past year but it's beginning to coalesce. Journos are connecting the dots. As Kipling wrote, "softly, softly, catchee monkey."