Where In the World Are We Going? 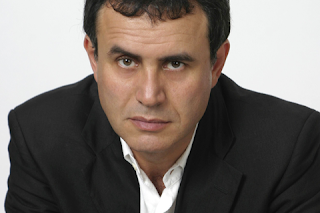 Legendary economist, Nouriel Roubini, warns there won't be any quick fix to the economic upheaval across the west. He figures it will be like the Great Depression - only worse.  He recently gave an interview to Der Spiegel in which he threw a wet towel over the latest optimism in the stock markets.  The markets, he says, are delusional.


The crash is even greater than it was then. It took years from 1929 until the full extent of the crisis became visible. Compared to today, it was like a slow-motion train wreck. Now the world economy has collapsed within weeks, and in the U.S. alone, more than 40 million people are unemployed. Many believe that the economy will pick up again just as quickly, but that is a fallacy.

On Wall Street, big corporations set the tone, banks and technology companies in particular. They will survive the crisis because the state will never let them go under. They will kick people out, cut costs and in the end, they will have even more market power than before. But what we here call Main Street, small- and medium-sized companies, can't do that. They just go bankrupt. I estimate that every second restaurant in New York City will have to close, but McDonald's will survive. But that's not all.


In the area where I live, the Bowery in Lower Manhattan, three quarters of the demonstrators are white. Many of them are young and belong to the urban "Precariat," the new underclass that has replaced the traditional working class, the "Proletariat,” in advanced service economies. The Precariat is made up of temporary workers, freelancers, people who work on an hourly basis, gig workers, contractors - even though they often have university degrees. Those who are not in regular full-time employment no longer receive state transfers after three months. These people can then no longer pay their rent and telephone bills, and electricity and water are cut off. It will be a long, hot summer.

Roubini adds his name to the list of those who believe that Trump will never leave the White House voluntarily no matter the outcome in November. America on the verge of a second civil war?


Trump does not go to the Supreme Court like Al Gore and request a recount of the votes if the election results are close in some districts. He will blame China, Russia, blacks or immigrants and act like the dictator of a banana republic. He will call his followers to arms – there are enough armed white fascists running around out there. He reminds them often enough of the Second Amendment, which allows Americans to own weapons.

To close the interview, Roubini was asked if he saw signs of hope.


Hope? I'd have to think. It was good that the governments reacted so quickly and massively to the pandemic and its consequences. But otherwise? I fear that the 2020s will be marked by doom and disaster. Perhaps the global economy will be more sustainable afterwards. But for now, it will be gloomy.

Thank goodness we sold our modest little joint in Arizona before we left for home the end of February, Mound. We enjoyed most of our 20 winters down there and made friends with some wonderful folks, but this last couple of years you could see the country getting crazier and crazier.

Even with the pandemic, we don't see ourselves heading over the 49th in the near future.


I know others who spent many years wintering in that area, Lulymay. Every one says, as you have, that the country has been "getting crazier and crazier." Some, such as Chris Hedges, claim that America is in a simmering "pre-revolutionary state." I never imagined I would see it so deeply, irreconcilably divided across so many fault lines. Abraham Lincoln knew such a time when he drew on scripture to warn that "a house divided against itself cannot stand."

Getting out when you did sounds like the smart move.

I'm no economist, but all this sounds about right... and tragic for our youth of all races.

It's not necessarily economic in nature but the response to the George Floyd murder has been much more positive in a myriad of ways then I can remember any event in the US being since the widespread and rapid growth in support of the LGBTQ community about 10 years or so ago (Not nearly enough, and threatened daily, but still amazing!)

Sure, it's a low bar. Forty plus years of neoliberalism hasn't produced many leftist greatest hits.

Keep up the good work, here, Mound. I really mean it!


For some years now I have thought we have failed to consider the looming challenges of the years and decades ahead in the context of our resilience to bear them. We have needed to stress test our nation, our economy, and, most of all, our society. In hard times, be it plague, depression, even war, social cohesion plays an enormous part in how we respond to challenges.

Many years ago Bill Moyers produced an excellent PBS series on posterity. It began by examining how posterity helped build America, how past generations were keen to invest in future generations. He looked at how posterity had withered as a once prominent factor in policy and planning in the 80s and what that could portend for the future of America. Without its influence, vision becomes narrowed on an election-cycle scale. Nothing inspires greatness because that is a deliberate act that requires at least a modest degree of sacrifice for the betterment of others.

In Canada, I think the last great act of posterity was the Charter of Rights and Freedoms.

Thanks for your thoughtful words, Brian.

Indeed, Mound. In the eyes of the powerful 40 years of neoliberalism has redefined posterity to the Gekkonian definition: "Leaving enough money, security and freedom to ensure oneself and one's family have enough to survive the coming shitstorm."
Screw the company, screw the long term, screw the country. I'm in it for the next fiscal quarter, baby! And, if shit hits the fan, I've got a massive parachute with which to land me and my spawn.