Did Semrau Even Commit a Crime? I Can't See It. 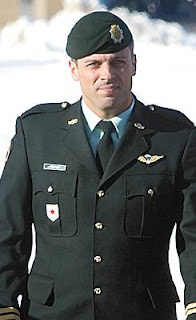 To convict Semrau the court needs clear proof. Facts are to be proven, not assumed. And this case is riddled with gaping holes.

How did this Afghan die? Did Semrau even shoot the man? If he did shoot the insurgent, were his rounds the cause of death?

We know there was a man. We know the man was severely, probably mortally wounded. We know that those present saw Semrau alone with the man and that they then heard two gunshots. And that, in the final analysis, is about all we know.

I'm pretty sure Semrau shot the man. Common sense tells me as much. But common sense is a different creature entirely from proof beyond a reasonable doubt. Nobody has proven that Semrau actually shot the deceased.

I suppose if Semrau shot the man the severely wounded insurgent could have died from those shots but I have no means of knowing that one way or the other. He did already have mortal wounds and who can say whether he died from those?

No one seems to have any evidence of just when this man died. One witness suggests the man was already dead before Semrau fired his weapon. How do we know that Semrau, knowingly or unwittingly, didn't fire into a corpse?

For the life of me I can't see how justice could be served by convicting Robert Semrau. The case simply is not made out.

What this trial reveals is the blurry line between lawful killing and battlefield murder. We had a lot of both on the battlefields of Europe during WWII. My late father, a combat infantry officer, told me of how sometimes prisoners were taken and sometimes they might be shot out of revenge for some atrocity or because guarding prisoners just wasn't feasible at the particular moment. Yet we knew enough then only to prosecute the particularly egregious killings. Otherwise we would have needed half the army to sit in judgment on the other half. And we didn't prosecute them and we welcomed them home as heroes that we venerate to this day.
Posted by The Mound of Sound at 10:48 AM

Email ThisBlogThis!Share to TwitterShare to FacebookShare to Pinterest
Labels: Semrau

No body, no forensics, no bullets. No case? I hope so.

It's painful to watch this man being used as a scapegoat. From what I have read about him, it appears he is a highly competent, and well respected Officer.

He did what he felt was right. People who have similar experiences will understand that.

Once again Mound, you venture out of the pond of popular and pre approved thought process, and swim upstream. Likely why I agree with you so often.

One orphan to another, keep on doing what you do. The world never has enough people to offer intelligent, wise, caring thoughts, void of the scourge of patronage.

I would love to be let in on the reason this prosecution was brought at all. We'll bomb entire Afghan wedding parties straight to Allah without wincing yet bring a flimsy murder prosecution down on a fine officer who, at worst, put a fellow combattant out of his misery.

I can't praise Semrau in any way for what he did but I cannot begin to condemn him for doing it either - that is, of course, assuming he actually did what no one can show happened.

The Afghan interpreter who gave evidence, has grievances.

Fournier gave testimony that has been reported differently by different sources. (It would be good to have all of it reported in one place). According to the Star, an ANA Captain said to leave the insurgent, no medical aid required, he was in the hands of Allah now.

We know how bureaucracy works. We know that upper level positions in the CF pay well.

We know that human nature is what it is. In our times, when faced with a choice between loyalty and honor, and ones own interests... cya is a popular option.

We know there was a substantial period of time that passed between the incident and it being mentioned by an Afghan to CF personel. (Capt. Rob, boom boom)

We know the Afghans are resourceful. Not unlike politicians.

What we don't know is the residual effect of scapegoating another well respected CF member to protect or futher the Career's of pencil pushers, and politicans.

From what I have read about him, it appears he is a highly competent, and well respected Officer. Similar thoughts were also held about Colonel D. Russell Williams as well.

Russell, by all accounts, was unhinged, a sexual predator and a murderer. It truly is offensive to seek parallels between Russell and Semrau who, to the extent he dide anything, put a mortally wounded enemy out of his misery.

The comparison attempt suggests that Anon 4:33 has a seriously warped perspective on these two unrelated situations.