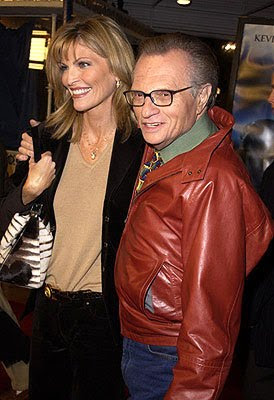 76-year old CNN celebrity interviewer Larry King is heading for bachelorhood again. That's right ladies, he's available.
King has filed for divorce from his 50-year old wife of 13-years citing "irreconcilable differences." She says that Larry has been up to his old tricks, fooling around - possibly with her sister to boot.
Larry has had seven wives but this'll be his eighth divorce. He remarried and re-divorced one woman along the way.

(by the way, he gets to keep the jacket as part of the settlement)
Posted by The Mound of Sound at 11:56 AM

Yeah, sure. You're just jealous of that fine jacket.

that colour is called Red Viagra.

Now we know what thoses suspenders are holding up.