Here's Where To Fight Islamic Extremism 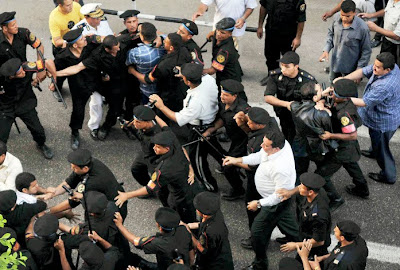 Egyptian police on Tuesday beat back and detained pro-democracy demonstrators in central Cairo calling for constitutional reforms and a repeal of the decades-old emergency law that restricts a broad array of personal rights.

At least 90 people were detained, according to organizers of the rally from the 6th of April movement, a mostly youth-led organization formed two years ago that is pushing for more political freedom
.
Protester Amal Sharaf, 35, an office manager in an advertising agency, was hysterical after being beaten by a police officer with a baton. "I've been to protests before, but I've never been beaten," she said, grabbing her wounded arm. "We're trying to change the emergency law that we've been living with for 28 years."

The demonstration came amid political uncertainty, with parliamentary elections slated for this year and a presidential election next year. President Hosni Mubarak, 81, who had his gall bladder and a growth on his small intestine removed in a surgery performed abroad last month, has ruled Egypt for nearly three decades. He has not said yet whether he will compete in next year's election, fueling speculation that he might try to ensure his son, Gamal, succeeds him.

Now there's your problem. As in Saudi Arabia and other places, we're propping up a tyrant. In this case it's Mubarak. Moderate Egyptians, Muslims of course, keep getting oppressed when they clamor for democratic reforms. Get too pushy and Mubarak's secret police whisk you away in the night.

What happens? Moderates eventually get frustrated. Many turn to the only organization that stands up to Mubarak, the Muslim Brotherhood, a decidedly Islamist outfit. They're the only game in town. They don't turn to us because they know that we're standing behind their oppressor, keeping the guy in power. We even give him the weapons he uses against them.

When we spend decades pursuing policies that radicalize the Arab Street what in hell do we expect except to drive moderate Muslims into the arms of the extremists - their one and only option?
Posted by The Mound of Sound at 10:18 AM

Email ThisBlogThis!Share to TwitterShare to FacebookShare to Pinterest
Labels: Islamism

Since no one has commented on your great words of wisdom, I will. Is it not odd that even minor demonstrations in Iran are splattered all over western media? In case of Egypt you don’t hear a beep. Besides Iraq the breeding grounds for extremists is Egypt and Saudi Arabia because of despotic governments supported by US and west. Same goes for Israel who is a despot for Gaza, West Bank, Lebanon and to certain extent Syria. Israel is also fully supported by US and west. As long as this continues there will be no peace.

Hi LD. I hope we've learned from the debacles of the past decade that we can't wipe out Islamic extremism with bombs. We can shift it about, spread it around (as al Qaeda has spread from the Gulf States east to Indonesia and west through northwest Africa and into Europe) but that only makes the job tougher for us. Islamism is utterly dependent on support from the Arab Street, moderate Muslims who have been too long oppressed in seeking democracy. Only by severing that connection can we strike a body blow at the Salafists and Wahabism. Even if we don't care enough for moderate Muslims to do it for them, we should do it for our own benefit.

The Bushes and Harpers, the Petraeus' and McChrystals and Hilliers only help keep radical Islam flourishing. If their military efforts were bringing any lasting success their efforts might be meaningful. They're not and so they aren't.

As that American comedian says, "you can't fix stupid."