What "Next" Assignment? Bring the Army Home - Period 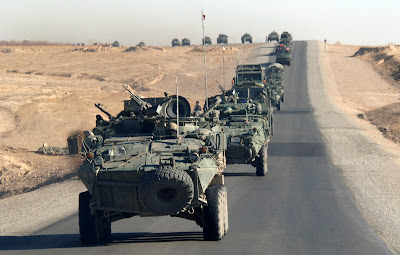 It's time the grown ups got all the generals together for a little talking to. There has been a creeping mist of news stories lately claiming that Canada's top generals are looking for their next gig, even speculating they may be lobbying to take a go at the Congo. You could be forgiven for suspecting what they're really trying to do is to keep the Legion in the field, somewhere. It's as though they've finally gotten this war fighting machine and they don't want to send it back to barracks.

I think these soldiers need a little furlough. For starters, our combat troops need a rest, a good long rest. They've been at this the better part of eight years and many have had several rotations through Kandahar. Enough.

As for the generals, they need time off for meditation. We've been taught a great many lessons in Afghanistan, painful lessons paid for in blood and treasure. If those lost lives are not to have been wasted, this is the time to use those experiences to draw up a "do and don't" list.

Remember when Hillier pompously boasted about how we were going over to Kandahar to "kill scumbags" that he assured us numbered just a few dozen? There's your first "don't" - don't ever underestimate the enemy your soldiers will be required to fight. History books are full of losers who did just that.

Remember how we deployed to Kandahar with a force neither trained nor equipped for the job? They were finely honed for conventional warfare but not for counterinsurgency. Our generals seemed constantly frustrated, befuddled even that the guerrillas wouldn't stand and fight (read "stand and be mowed down"). Huh? Insurgents don't stand and fight against conventional forces with overwhelming firepower advantages. They're not morons and only a moron would think they are.

Little steps for little forces. We went over there with a total force of just 2,500. Less than a third of that were actual fighting soldiers. Counterinsurgency doctrine states that to cover a province the size of Kandahar takes 20,000 counterinsurgents (boots and rifles). The best you can do (and our soldiers did it well) with a force that size we deployed is win tactical skirmishes that decide nothing.

Read and learn. We made most if not all of the major tactical errors of counterinsurgency warfare throughout our five years in Kandahar. Get copies of the US Army/Marine Corps counterinsurgency field manual, FM3-24. This little handbook contains the digested wisdom of two millenia of unconventional warfare from Caesar to the Boers, TE Lawrence (of Arabia), Guevara to Giap. The Taliban have been playing very conventional insurgency warfare. We've been the side that strayed from the lessons and we did it at almost every turn with predictable results.

With a military force as minuscule as Canada's it's foolish to try to be all things to all men. When you're small it's often best to find a niche or two where you can really excel and stick to that. Somehow Harper and Hillier got many Canadians thinking that peacekeeping was for second-raters. Real men shot people and blew shit up. There were people who really needed killin'. It was something perfect for feeble minds who slapped magnetic plastic ribbons on their trunk lids but it was pure bollocks. With all the shortages spreading around the world, the one thing our planet has in abundance is soldiers armed to the teeth ready to unload. In that particular ocean, Canada is but a guppy.
Something else that demands careful scrutiny is the abject and sordid failure of Canadian political leadership in the mission to Kandahar. I fault Paul Martin for gullibility in believing Canada could tackle the Kandahar mission with a force of 2,500 and for believing the tall tale that our military could do that and have enough strength to take on a second major effort if required. That was bullshit and if the smell didn't give it away, the taste should have. But it was Rambo Harper who was the greasy punk who exploited our forces for everything he could get out of them with both the voting public at home and his American Idol, W. We should have been out of that bottomless hole by now but for Harper's insistence on extension and Dion's feckless capitulation to his demands.

Let's take a breather. Sit back and reflect. Let's not rush into the next mission. We need to have a serious talk about Canada's and her military's role in the difficult decades that lie ahead.
Posted by The Mound of Sound at 8:21 AM