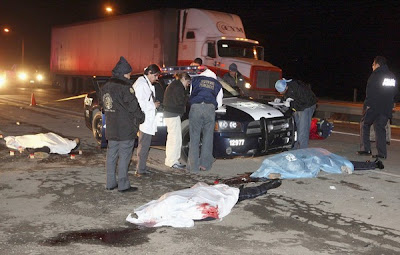 First it was Mexican president Felipe Calderone, now it's his predecessor Vincente Fox raising the idea of legalizing the production, distribution and sale of drugs in their country.   Mexico remains mired in a vicious drug war between gangs and the government that has claimed 28,000 lives in recent years.  Despite the government's efforts the gangs have grown increasingly powerful and increasingly bold aided, in no small part, by widespread police corruption.
Neither Calderone nor Fox will come right out and advocate for legalization.  Both present it as an issue that should be debated.   Mexico is keeping a wary eye on California where voters will decide in November whether to legalize possession of up to an ounce of marijuana and allow the state to tax sales.

Regardless of one's position on legalizing or decriminalizing drugs of any kind, it's becoming increasingly obvious that the "War on Drugs" initiated by Richard Nixon in 1970 hasn't worked.  Unfortunately the prohibitionists don't have a Plan B and the high-level narcotics industry has learned to thrive under the existing system.   While interdiction and eradication efforts can claim some successes, so long as there is a market for the drugs and massive profits to be derived, there will always be ample supply reaching the end consumer.

Nixon and every president since then has been highly successful at stuffing their prisons full of drug users but that too hasn't made a dent in the trafficking even as it has created an enormous drain on already debt-ridden states.

Leaders of the drug-importing states really have but two choices.   Stick with the current, failed approach, which is really just treading water, or decriminalizing the production and possession of some, but not all, street drugs.   Marijuana is the obvious candidate for decriminalization, something that Paul Martin was willing to recognize.   Ideologues like Harper, naturally, prefer to step up Plan A and simply build more prisons  ...except in Afghanistan where we stand by and allow our supposed ally to produce just as much illicit opium as it likes for processing into heroin and delivery to our own streets.   Wait a minute, doesn't that make Harper complicit in heroin trafficking?   No wonder he won't decriminalize drugs.

Photo - LA Times - 3 federal police officers gunned down by drug gangs
Posted by The Mound of Sound at 8:39 AM

now it's his successor Vincente Fox