Fearmongers, Smearmongers - The Perverts Among Us 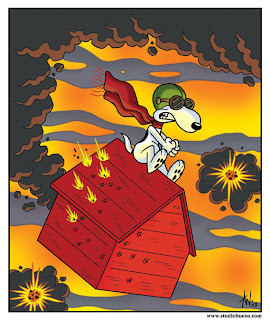 I think a lot of us instinctively sensed they were, well, pretty bent but it's become clear to me at least that today's uber-right are more than merely bent, they're perverts.

These dodgy lowlife advance their rancid ideologies and fundamentalist fantasies with fear and smear.   They shamelessly use fear to panic and herd their supporters and smear to hobble their opponents.

But does that make them perverts?   Well, consider a few definitions of the verb "pervert" -  to lead into mental error or false judgment; to misconstrue or misinterpret, especially deliberately; to turn away from the right course.

That pretty much sums up the perverts of today's far right, including Canada's prime pervert, Slimin' Stephen Harper.   This perv couldn't help himself yesterday when he was in the north on the same day two aged Russkie bombers made a patrol pass well outside Canadian airspace.  Steve got up on his hind legs before the dutifully assembled and robotic reporters and bellowed how fortunate we were that Canadian fighters had intercepted the Russian Bears and turned them away before they could penetrate Canadian airspace.

Now that's a fine example of the prime ministerial perv at his fearmongering best.   He insinuated the Russians were an actual threat somehow intent on violating Canadian airspace had they not been forced to turn away by our fighters.   To the gullible idiots who happily feast on Steve's droppings this must have made perfect sense and allowed them to indulge in both fear and joy.   And, of course, that was Steve's target audience - anyone ignorant or gullible or idiotic enough to believe a word he said.    In other words, a lot of Tory supporters.

To anyone who actually swallowed Steve's fear mongering bullshit, here are a few questions you should really try to answer:

1.   If the Russians were remotely interested in violating Canadian airspace, why would they make their approach at a spot where they could most readily be intercepted by Canadian fighters?

2.   If the Russians were remotely interested in violating Canadian airspace, why would they try it with a 1950's vintage, lumbering, eight-prop driven Tupolev Bear bomber with the radar signature of a battleship and flying at high altitude where it would be most readily detectable by our radars and most easily intercepted by our fighters?

You see, nothing Steve said made sense.  He was deliberately misconstruing or misinterpreting the events to pervert reality, to lead the gullible into mental error and false judgment.   He wants the voting public to conclude that stationing a handful of F-35 fighters in Cold Lake or Bagotville could somehow defend Canada against swarms of long-range, high-speed, ground hugging cruise missiles which is what those Bear bombers would be using from far outside Canadian airspace if the Russians ever did want to attack.   Rank fearmongering by our Pervert in Chief.

But the Pervert of the Day Award goes not to the dank denizen of 24 Sussex Drive but to Britain's Sunday Telegraph and its two hacks, Christopher Booker and Richard North, for their smear job on IPCC Chairman Rajendra Pachauri.

These two pervs and their rightwing rag slimed Pachauri in December in a piece entitled, Questions over business deals of UN climate change guru Dr Rajendra Pachauri.   The article accused Pachauri of "making a fortune from his links with 'carbon trading' companies" and speculated the money Pachauri made on the side, "must run into millions of dollars".

As George Monbiot details in The Guardian, the smears caused the charity Pachauri actually works for to call in KPMG to review his financial affairs.

The audit found that, beyond Pachauri's 45,000 sterling salary, his extra income was a total two thousand pounds, more than half of it royalties from his books.   The income he did earn from outside organizations went entirely to the charity that employs him, The Energy and Resources Institute.  As for his chairmanship of the IPCC, Pachauri earns a big, fat nothing.

Read Monbiot's article for it reveals how freely the rightwing media deliberately slime those whose views they oppose.  They don't even make a pretense of fairness much less honesty.   They too are the perverts among us.
Posted by The Mound of Sound at 9:00 AM