Save Your Fear. You May Want It, Later. 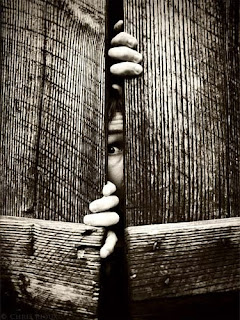 Rovian politics have demonstrated just how far an inept administration can go so long as it knows how to inculcate fear in a public willing to allow themselves to be scared witless.   Harness fear to anger and you've really got something very powerful.

Fear conditions people.   It conditions them to surrender hard-won rights and freedoms to the unscrupulous.   It turns them gullible and suppresses critical thinking as somehow disloyal.   It evokes "just because" illogic.  It is the elixir of the Wizards of No.

Bush-Cheney used fear and anger to persuade the American people that invading Iraq was "the right thing to do."   Even after no weapons of mass destruction were found to exist, they continued to fall back on the "right thing to do" justification to defend their indefensible and oh so illegal war.

Uber-rightwingers like Harper know the value of fear and they use it all the time.   It's what keeps them in the game.  It's what shapes their legislative agenda.   Here's a clear example, crime.   Harper has used the fear of crime to justify his punishment and imprisonment fetish.   Crime rates are steadily and happily declining but that's unimportant.   What counts is the fear of crime  you can instill in the public.  Tell me that's not kinky.  What's next Steve, nipple piercings?

There's another benefit to fearmongers.   Fear makes a dandy substitute for vision and leadership.   Make the citizenry fearful and angry enough and you're off the hook.   Any bozo in the White House could pick up the phone and tell the Joint Chiefs of Staff to loose the hammers of hell on a place like Iraq - provided the public is suitably conditioned to see that country as a threat, to fear that country.

Then there's our own Furious Leader.   What vision has he ever shown?  None.  The guy's an empty suit.  Remember all those ideas he had before he became prime minister?   Where did they go?  Look at the way he's run elections since then.  Instead of presenting clear platforms - the sort that require vision - he turns them into referenda on the opposition leader instead.   He pumps his people up, makes them fearful of the opposition, and squeaks back in for another term having avoided any real assessment of the lousy, ever dodgy way he governs.

Another rarely considered quality of fear is that it's not limitless.   Each of us can only handle so much fear.   We have to be able to eat, to sleep.  Life must go on.   The more of your fear quota that's allocated to, say, fear of crime, fear of Muslims attacking your town, fear of creeping socialism (interesting how that's become a mortal threat again), fear of somebody taking your guns away - the less fear you have available for actual threats.   Once your plate is full, who wants to hear about things like global warming, corporatism, environmental degradation or the encroachment on democracy by forces of oligarchy?  That's why you need to save your fear.   Keep it for things that matter.

Here's a suggestion.  Don't be afraid.  Save your fear for things that really matter like the need to defend democracy (something that's as old as democracy itself).   Be fearful for your democracy.   Be at least a little fearful of runaway global warming because we're all experiencing the taste of that lash right now and there's plenty worse to come.

Be fearful of threats that you can do something about.   Use that fear to energize yourself to seek solutions or to demand that those in power come up with answers and take action.   When you combine rational fear with courage and optimism, those whose stock in trade is manipulation have something of their own to fear - you.

Look at the United States during the "Red Scare" of the 50s or during the Bush-Cheney years if you have any doubts about the destructive power of fear.   Realize that there are people who will exploit your fear as a weapon against you.  Reject these creatures and their ways out of hand.   Make them fearful of you because, inside, they're really cowards.   That's why they have no real, coherent vision.  Their type can only do things to you, not things for you so turf them.  You deserve better and they have no intention of providing what you deserve.

We're at real risk if we let others manipulate us with fear.   There's simply not enough fear to squander it on these guys.
Posted by The Mound of Sound at 9:10 AM

Email ThisBlogThis!Share to TwitterShare to FacebookShare to Pinterest
Labels: fear

This blog is absolutely spot on. I have been wondering why the West seems so happy to slide into fascism, and am guessing that most people want to have their thinking done for them. The technique of the "big lie" still works great!

BTW I was looking for a blog that talks about my concerns: this seems to be it - so far! Keep up the good work!