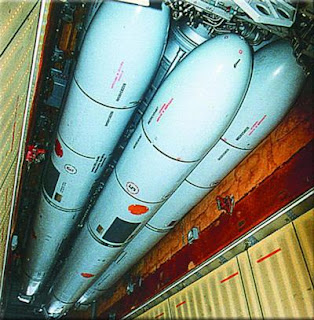 You have to be pretty weak-minded to buy Harper's nonsense about Canadian jets intercepting patrolling Russian Bear bombers outside Canadian airspace.  F-18, F-35, Sopwith Camel it doesn't matter a bit.

The issue isn't intercepting Russian bombers.   It's that, if those bombers were going to attack North America, they would have launched their attacks long before our fighters arrived on the scene.  The Russian bomber fleet no longer bombs.   They launch long-range cruise missiles.   Some of the latest Russian weapons are estimated to have ranges in excess of 5,000 km.   Like the old Ban Deodorant ads, "it takes the worry out of being close."

Rather than running tail chases on empty bombers, we'd need our small force of fighters to locate and destroy masses of incoming cruise missiles.   When it comes to the uber-pricey F-35, how well would it do at that job?  Not very well at all.

Lockheed Martin gives the F-35's radius of action at about 730 nautical miles.    Since we don't have a lot of northern airfields, that gives the Russians some enormously wide missile corridors beyond the effective reach of the fighters.   Worse yet, that 730-nautical mile radius is based on the F-35 at cruising speed and cruising altitude.   Put it wide open, down in the weeds hunting ground-hugging cruise missiles and that 730 nautical mile figure becomes enormously degraded.

Put simply, the F-35 can do a lot of things, many of them much better than the current CF-18s.   However as a means to defend North America against a Russian air-launched cruise missile attack, it's essentially useless.
Posted by The Mound of Sound at 11:16 AM

I agree on the assesment I think the fact that we have not openly discussed what the mission is is a very expensive shame.

So what is the prefered weapon for hunting down swarms of cruise missles?

Scattered air bases with A10s? swarms of the cheapest jet fighers around????

If the sunburn is anything to use as example we can expect the russian cruise missles to go supersonic within a decade, then there will be no real defense other than detante

Canada doesn't have the budget that would be necessary to construct and man the number of air bases and wings of fighters that would be needed to counter a Russian cruise missile attack. The only feasible defence would be to attack the bombers far beyond our territory, before they could launch, but that would leave them defended by their own, long-range fighter/interceptors.

Harper is just using the Tu-95s to blow smoke up the asses of gullible Canadians. Like all right wing pervs, fear is his favoured weapon to use on his own supporters. Sick bastard.

Does anybody seriously believe Harper's statement that Russian bombers were intercepted? I wouldn't be surprised if it was just another bullshit lie designed to bolster his "we've got to protect the north" road trip.