I Know - Let's Make It a Crime Not to Report a Crime! 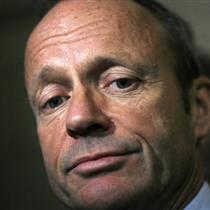 Not for the first time there's a glaring disconnect between Stockwell Day and reality.   Day, who shares Furious Leader's punishment and imprisonment fetish, argues that crime is out of control in Canada, unreported crime that is.   Therefore Mad Steve's obsession with bloating the Canadian prison system is sensible, even essential.

Okay Stock, here's the logic bomb about to go off in your decidedly understuffed cranium - we don't usually manage to arrest, try and convict people for unreported or undetected crimes.   The wheels of our criminal justice system don't begin to turn until somebody notices something.   Until that happens you're lacking a customer.

But Furious Leader wants those new prisons, lots of extra prisons, so you're going to have to fill them somehow.   Here's an idea.   Make it a crime, punishable by a lengthy term in the Greybar Hotel, not to report a crime.  You might even set up a system to reward people who turn in others for not reporting crimes.  A free deck for the cottage of every informer.   And look at the terrific bonus - you get to punish the victim and what Conservative doesn't simply love that?

Yep, in no time you'll have no end of new inmates to swell the prison ranks.  Problem solved.
Posted by The Mound of Sound at 9:01 AM

Email ThisBlogThis!Share to TwitterShare to FacebookShare to Pinterest
Labels: Day

Make it a crime, punishable by a lengthy term in the Greybar Hotel, not to report a crime.

Hah. Most of this will go unreported. :)

Where are the statistics for unreported crime? If it is unreported how do we know it is happening? This really has an edge to it that is very uneasy.