Dead and For What? 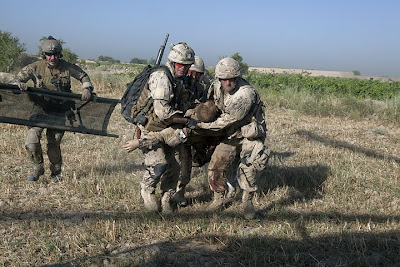 How many more?  I asked myself that yesterday on reading about the latest Canadian soldier to die of wounds sustained in Afghanistan.


Three more?  A dozen, two dozen, perhaps four dozen, even more?  I expect that's up to the Taliban, them and the rotting, putrid carcass of a central government in Kabul.   Each of them - our enemy and our supposed ally - play a direct role in every Canadian or British or American combat death in Afghanistan.


The Karzai government is instrumental in the killings of Canadian soldiers.  Its rank corruption and its police and security agencies that prey upon the Afghan public increase sympathy and support for the rebels.   Karzai & Company ensure there'll never be a viable Afghan National Army capable of defending that country and allowing our forces to leave on our terms.


What for?  My second question.  It rests with our generals to lead our soldiers into battle but it's the direct responsibility of our political leadership to guarantee that they're fighting - and dying - for something meaningful, worthwhile.


For the past four years, during which the overwhelming majority of Canadian losses have been suffered, it has been Stephen Harper's responsibility to ensure that there was lasting meaning and true worth to each dead soldier's life.   Just killing Taliban wasn't enough, it never was.


But Steve didn't hold up his end.   He didn't even try.  Worse yet, he exploited those deaths and sought to use them to his political advantage and to undermine his already hapless opposition.  Steve used those dead and wounded and he gave nothing back.


Layton and Ignatieff have nothing to crow about either.    Jack did say that we should talk to the Taliban (as though the Talibs are remotely interested in talking to us) but that was just Jack passing wind through his mouth.   Bad as Jack is, Iggy is far worse.  His Liberals are now demanding that Canadian troops stay on after 2011 in Afghanistan but just in a "training" role instead of a combat role.  Every role in Afghanistan is a combat role.   We don't get to decided that.   The Taliban decide that because they bring the fight to us.  Most of our people are killed by IEDs, by booby-traps, only they're not concealed on jungle trails like in Vietnam, they're laid right out on the roadsides where our troops have to pass whether they're on a training mission or a combat patrol.


I don't want any more Canadian lives squandered on Afghanistan, not one more.   Their deaths are not heroic, they're simply tragic and entirely unjustifiable.   That we keep asking our soldiers to go bravely to such meaningless deaths is beyond tragic, it's criminal.  And for that, we're all accountable.
Posted by The Mound of Sound at 7:15 AM

Our troops need to stay in Afghanistan until the job is finished and the Taliban are defeated.Our troops believe in the mission and what they are doing.This mission is important and needs the support of Canadians.Our troops are doing a remarkable job over there.As a proud Canadian, I'm very proud of the men and women who wear the Canadian uniform.To those who have lost their lives, they will should always be remembered with honour.

Even our top military leaders know and openly admit the Taliban will never be defeated so just how do you propose we go about it?

Our field soldiers are great, their leaders are crap.

Our side has been banging the drum over there for nine years and all we've accomplished is to allow the Taliban to come back and continue to control more territory. Meanwhile our brave soldiers are being fed into the meat grinder to prop up a corrupt, rotten Afghan government. If you think that's worthwhile, then don't give me any nonsense about supporting the troops. That's bullshit.

Our troops need to stay in Afghanistan until the job is finished and the Taliban are defeated.
What job? No goals have been defined beyond being moving targets to justify staying there...
Taliban defeated? Ain't going to happen.


Our troops believe in the mission and what they are doing.
They are soldiers - paid to fight and die if necessary for what the State tells them. It's not up to them to decide.


This mission is important and needs the support of Canadians.
After all these years, support is deservedly exhausted.


Our troops are doing a remarkable job over there.As a proud Canadian, I'm very proud of the men and women who wear the Canadian uniform.To those who have lost their lives, they will should always be remembered with honour.
The soldiers are nothing more than footnotes to the folly of supposedly bigger men...

Of course our troops believe in the mission. They're trained to believe. Only someone who has never served in the military can read into that greater meaning than truly exists.