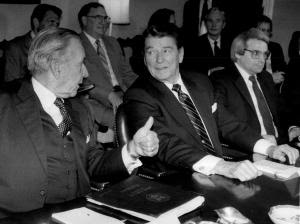 David Stockman is the guy who fed Ronald Reagan the hallucinogenic fantasy of trickle-down economics, the idea that tax cuts and other benefits for the rich simply created a bounty that spread downward to benefit the white and blue-collar classes.   It wasn't until years later that Stockman repented and admitted he'd pulled that theory right out of his ass to justify Reagan's oligarchic tax cuts and the massive deficits they fueled.

That was then, this is now.

Today, in an astonishing op-ed piece for The New York Times, this same David Stockman chronicles what he calls the Four Deformation of [America's] Apocalypse:

...The first of these started when the Nixon administration defaulted on American obligations under the 1944 Bretton Woods agreement to balance our accounts with the world. Now, since we have lived beyond our means as a nation for nearly 40 years, our cumulative current-account deficit — the combined shortfall on our trade in goods, services and income — has reached nearly $8 trillion. That’s borrowed prosperity on an epic scale.

It is also an outcome that Milton Friedman said could never happen when, in 1971, he persuaded President Nixon to unleash on the world paper dollars no longer redeemable in gold or other fixed monetary reserves. Just let the free market set currency exchange rates, he said, and trade deficits will self-correct.


The second unhappy change in the American economy has been the extraordinary growth of our public debt. In 1970 it was just 40 percent of gross domestic product, or about $425 billion. When it reaches $18 trillion, it will be 40 times greater than in 1970. This debt explosion has resulted not from big spending by the Democrats, but instead the Republican Party’s embrace, about three decades ago, of the insidious doctrine that deficits don’t matter if they result from tax cuts.

(Note - Stockman is right but there's more.   Following WWII, every US President, Republican and Democrat, reduced the federal debt as a percentage of GDP, even during the Vietnam War.  Reagan, Bush I and Bush II reversed all of that and more.  Obama has had his hands tied by the fiscal nightmare he inherited from Junior Bush)
In 1981, traditional Republicans supported tax cuts, matched by spending cuts, to offset the way inflation was pushing many taxpayers into higher brackets and to spur investment. The Reagan administration’s hastily prepared fiscal blueprint, however, was no match for the primordial forces — the welfare state and the warfare state — that drive the federal spending machine.


Soon, the neocons were pushing the military budget skyward. And the Republicans on Capitol Hill who were supposed to cut spending exempted from the knife most of the domestic budget — entitlements, farm subsidies, education, water projects. But in the end it was a new cadre of ideological tax-cutters who killed the Republicans’ fiscal religion.


...when ...the Federal Reserve chairman, Paul Volcker, finally crushed inflation, enabling a solid economic rebound, the new tax-cutters not only claimed victory for their supply-side strategy but hooked Republicans for good on the delusion that the economy will outgrow the deficit if plied with enough tax cuts.

By fiscal year 2009, the tax-cutters had reduced federal revenues to 15 percent of gross domestic product, lower than they had been since the 1940s. Then, after rarely vetoing a budget bill and engaging in two unfinanced foreign military adventures, George W. Bush surrendered on domestic spending cuts, too — signing into law $420 billion in non-defense appropriations, a 65 percent gain from the $260 billion he had inherited eight years earlier.

The third ominous change in the American economy has been the vast, unproductive expansion of our financial sector. Here, Republicans have been oblivious to the grave danger of flooding financial markets with freely printed money and, at the same time, removing traditional restrictions on leverage and speculation. As a result, the combined assets of conventional banks and the so-called shadow banking system (including investment banks and finance companies) grew from a mere $500 billion in 1970 to $30 trillion by September 2008.

But the trillion-dollar conglomerates that inhabit this new financial world are not free enterprises. They are rather wards of the state, extracting billions from the economy with a lot of pointless speculation in stocks, bonds, commodities and derivatives. They could never have survived, much less thrived, if their deposits had not been government-guaranteed and if they hadn’t been able to obtain virtually free money from the Fed’s discount window to cover their bad bets.


The fourth destructive change has been the hollowing out of the larger American economy. Having lived beyond our means for decades by borrowing heavily from abroad, we have steadily sent jobs and production offshore. In the past decade, the number of high-value jobs in goods production and in service categories like trade, transportation, information technology and the professions has shrunk by 12 percent, to 68 million from 77 million. The only reason we have not experienced a severe reduction in nonfarm payrolls since 2000 is that there has been a gain in low-paying, often part-time positions in places like bars, hotels and nursing homes.


It is not surprising, then, that  during the last bubble (from 2002 to 2006) the top 1 percent of Americans — paid mainly from the Wall Street casino — received two-thirds of the gain in national income, while the bottom 90 percent — mainly dependent on Main Street’s shrinking economy — got only 12 percent.

What can you say?   Stockman is dead right even if he is a few decades late in coming out of the fiscal closet.   The financialization of America's economy and the export of its manufacturing sector have been its ruin just as they were the foundation for the ruin of previous economic superpower empires including the Spanish, the Dutch and the British too.   The United States remains in thrall to casino capitalism, the hallmark of which is its enormous wealth inequality and all the social ills that spawns.  It is this income inequality that Robert Reich contends dooms America to a future of destabilizing bubble economies.

We need to recognize that this perversion is just what our own Stephen Harper has long admired and praised.   He may be slowly seeing the light of Liberal prudence.   We'd better hope so.

Email ThisBlogThis!Share to TwitterShare to FacebookShare to Pinterest
Labels: Stockman

i visited your blog and found it very nice. So thanks for sharing your personal information. Keep it up