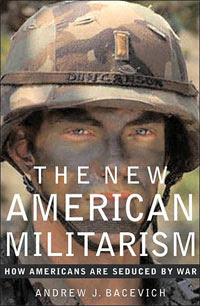 Ever so steadily America has fallen into the clutches of militarism, a crippling disease that could doom the republic and one that is going to be extremely difficult to reverse.

The state of 21st century American militarism is chronicled and dissected by career soldier turned academic Andrew Bacevich in his book, The New American Militarism.   The author explores how militarism took hold during the Reagan administration, how it came to be embraced by the American public and how it has been employed by every president since Reagan, Clinton no exception.

Bacevich examines how America's hyper-militarism has been bolstered and nurtured by neo-conservatism, evangelism and one branch of academia.   He lays bare the powerfully addictive nature of militarism once it evolves from a means of defence into an instrument of foreign policy and a vehicle to assure the affluence of the American people.   Finally he warns what lies in store if America's militarism continues unchecked and the many difficult measures his country must take to break its hold on the nation.

How did a bumbling fool like Ronald Reagan ever become so immensely popular with the American people?   Easy.   Like many successful charlatans, Reagan won the hearts and minds of his public by making them feel good about themselves.   Reagan prevailed by being the anti-Carter.

Bacevich points out that Carter's Calvinist realism, embodied in his "Crisis of Confidence" speech of July, 1979, was tailor-made for a shyster like Reagan:

"In a nation that was proud of hard work, strong families, close-knit communities, and our faith in God, too many of us now tend to worship self-indulgence and consumption.   Human identity is no longer defined by what one does, but by what one owns.  But we've discovered that owning things and consuming things does not satisfy our longing for meaning.  We've learned that piling up material goods cannot fill the emptiness of lives which have no confidence or purpose."

Carter went on to urge his countrymen to break their addiction to oil, calling on them as "an act of patriotism" to lower thermostats, observe the speed limit and use carpools.

"To the extent that "foreign oil" refers implicitly to the Persian Gulf - as it did then and does today - Carter was in essence proposing to arrest the growing strategic importance attributed to that region.  He sensed intuitively that a failure to reverse the nation's energy dependence was sure to draw the United States every more deeply into the vortex of Persian Gulf politics..."

"This is, of course precisely what has come to pass, with massive and problematic implications for the nation's security and for U.S. military posture and priorities.  [Since Carter's 1979 speech] the energy-rich regions of the world - the Caucasus and Central Asia in addition to the Persian Gulf - have absorbed an ever increasing amount of attention by the American military.   ...Today, increasingly, the profile of the American military presence abroad corresponds to the location of large oil and natural gas reserves."

That speech, while prescient, was fodder for Carter's political adversaries:

"...Ronald Reagan first and foremost - offered a different message, not of a need to cut back but of abundance without end.   [He] assured Americans not only that compromising their lifestyle was unnecessary but that the prospects for economic expansion were limitless and could be had without moral complications or great cost.  This, rather than nagging about shallow materialism, was what Americans wanted to hear."

"...As [neo-conservative founder] Norman Podhoretz has noted, Reagan 'made free and frequent use of patriotic language and engaged in an unembarrassed manipulation of patriotic symbols; he lost no opportunity to praise the armed forces, to heighten their morale, to restore their popular prestige.'  As a result, 'he also helped restore confidence ...in the utility of military force as an instrument worthy of political purposes.'"

Once in power, Reagan became the Founding Father of American militarism.  Reagan transformed America's all volunteer force.   The Pentagon's budget doubled during the Reagan years, the quality of recruits vastly improved, and the mythologizing of American military prowess was exploited at every opportunity.  America was once again "standing tall" thanks to its embrace of militarism:

"To substantiate Reagan's claim that 'as a nation, we've closed the books on a long, dark period of failure and self doubt and set a new course,' one needed to look no further than the freshly minted fighter jets, tanks and helicopters entering the force and the eager young men and women who crewed them.

Thus did military might - rather than, say, the trade balance, income distribution, voter turnout, or the percentage of children being raised in two-parent families - become the preferred measure for gauging the nation's strength."

"Reagan showed that in post-Vietnam America, genuflecting before soldiers and playing to the pro-military instincts of the electorate wins votes.

Given their pronounced political utility, neither the myths that Regan conjured up - about past American wars, about the purposes of American military power, and about those who served in uniform - nor the techniques he devised to exploit those myths disappeared with Reagan himself retired from office.   Rather they became enshrined as permanent aspects of American political theatre."

While America has always been a profoundly Christian nation, the relationship between religion and the military was, until recently, somewhat distanced.   Those barriers, however, came crashing down with the ascendancy of Christian evangelism and the Christian right.

"Certain in their understanding of right and wrong, growing in numbers, affluence, and sophistication, and determined to reverse the nation's perceived decline, conservative evangelicals after the 1960s assume the role of church militant.  Abandoning their own previously well established skepticism about the morality of force and inspired in no small measure by their devotion to Israel, they articulated a highly permissive interpretation of the "just war" doctrine, the cornerstone of Christian thinking about warfare.   And they developed a considerable appetite for wielding armed might on behalf of righteousness, more often that not indistinguishable from America's own interests.

...evangelicals looked to soldiers to model the personal qualities that citizens at large needed to rediscover if America were to reverse the tide of godlessness and social decay to which the 1960s had given impetus.

Militant evangelicals imparted religious sanction to the militarization of U.S. policy and helped imbue the resulting military activism with an aura of moral legitimacy."

Bacevich contends the role of evangelism in the rise of 21st century American militarism is profound:

"Conservative Christians have conferred a presumptive moral palatability on any occasion on which the United States resorts to force.  They have fostered among the legions of believing Americans a predisposition to see U.S. military power as inherently good, perhaps even a necessary adjunct to the accomplishment of Christ's saving mission.   In doing so they have nurtured the preconditions have have enabled the American infatuation with military power to flourish.

Put another way, were it not for the support offered by several tens of millions of evangelicals, militarism in this deeply and genuinely religious country becomes inconceivable."

Tomorrow - the High Priesthood of Militarism, America's Intellectual Right; Militarism as a Substitute for Diplomacy; Affluence Equated to Liberty and Militarism as Guardian of American Prosperity.
Posted by The Mound of Sound at 9:55 AM

I look forward to the next installment.

I've always maintained that the Reagan era/moral minority ushered in the mess we see today in the US and increasingly here in Canada. Bacevich has the words, historical research and analysis to examine that relationship effectively.

Bacevich does seem to have a following. This post seems to have brought me to the attention of USAISC or the United States Army Information Systems Command, an outfit said to monitor the web and integrate what they find with the larger intelligence service.

Hi fellas, wish you all the best!