No Canadian Troops in Afghanistan After 2011 - Here's Why 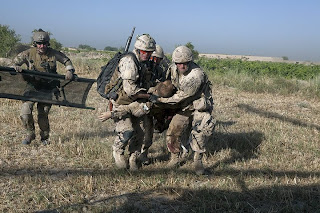 There are some prominent Liberals who envision Canadian forces continuing to serve in Afghanistan beyond 2011 in a non-combat/training role.  In Afghanistan there is no mission for Canadian soldiers that won't be a combat mission.   That's the reality when your enemy is on the offensive, holds the initiative and has relatively free reign of the territory.

How many Canadian soldiers have died in direct combat with the Taliban?   Contrast that to how many of our troops have lost their lives to the by-now infamous "IED" or improvised explosive device.   That's how the Taliban prefers to bring the war to Western forces - stealthily and remotely.

I remember a few years ago watching an interview with a Canadian combat engineer whose job was to disarm IEDs.  Asked where the Talibs were getting the high explosives and other materials to make the devices, the soldier replied that Afghanistan was awash in the stuff after decades of war.   The only component that was hard to get, he claimed, were the "C" and "AA" cell batteries for the detonators.  They had to be trekked in from Pakistan.

No matter where our soldiers are based, even on a training mission, they have to secure the territory around them to ward off mortar and rocket attacks.   That means patrolling and that means trolling for IEDs.  That means more dead Canadian troops.  That's unacceptable.

Those who advocate a continued Canadian presence in Afghanistan are dishonest or delusional.  They've completely forgotten why we went to Kandahar - to take pressure off the Americans when Bush/Cheney decided to go play in the sandbox of Iraq instead.   That's why we committed to go there for a specified term of years.  We weren't there to win the war, we weren't there to achieve peace for the Afghans.  We were there to plug a hole for a few years.

Remember when we were scheduled to leave in 2009?   Remember when the former Liberal leader put his foot down and insisted we stay with that deadline - until he didn't?  That's how we got a new deadline, 2011.  We gave the Americans two more years.

We need to train Afghan troops.   Now that's borderline hilarious.  What exactly has prevented us from fielding an effective Afghan army over the past 8 years?  We are, after all, amidst one of the most warlike peoples in the world - correction, four or five of the most warlike peoples in the world.  Warlike Pashtun, warlike Tajik, warlike Hazara, warlike Uzbek, warlike Baloch, warlike Turkmen.  If you're not warlike in Afghanistan, you're an historical footnote.   But there's your first clue.   You cannot build a lasting, reliable, national army in a country rent by tribalism and warlordism.  We have created something akin to a Tajik national army in Afghanistan but they're the ancient, mortal enemies of the Pashtun and they've got scores to settle.   Think that won't drive Pashtuns into the arms of their home team, the Talibs?  A square peg and a round hole.

Some years back a Senate Foreign Relations Committee staffer told the senators that there has never been a successful Muslim state that didn't first overcome both warlordism and tribalism.  Never has been, never will be.   There's your second clue.  Eight years ago we created a state that enshrined both and stuffed it behind the gossamer veil of a popularly elected democracy that never was more than an illusion.  What we created ensured that our past eight years in Afghanistan were really nothing more than us battling one side of their unresolved civil war with no way of winning.   Another square peg, another round hole.

The only conceivable purpose of training an Afghan National Army is to create an indigenous force to continue the war we've been waging so haplessly these past 8+ years.  There's your third clue.  Since we sent the Taliban packing across the border there have been two wars waged in Afghanistan, our war and their war.  Unfortunately we've fought but one of them, our war.  Square peg, round hole.

Our war is the military war, the type of war Western armies are trained and equipped to fight.  Our war is the type fought with tanks and artillery and close air support.   Our war anticipates fighting an enemy also armed with tanks and artillery and aerial firepower.   But in Afghanistan our enemy doesn't have any tanks or artillery or attack helicopters or strike fighters.   They don't even have but a fraction of our numbers.  Why not?  Because they don't need those things.

They would only need all that high-tech firepower if they intended to defeat us in our war, the military war, but they don't intend to defeat us.   They're relying on time to bring us down.  It's a hackneyed phrase but it's oh so true - we have all the weapons, they have all the time.

They also know that they can win their war and that's the one that ultimately decides the issue.  Theirs is the political war, the war for the hearts and minds of the locals.  We're not fighting their war.  If we were, we'd have flooded the countryside with 300,000 soldiers or more back in 2002/2003 when they might have made a difference.  To defeat them in their war demanded that we field a massive force large enough to secure the civilian population and prevent them from falling under the sway of the Taliban.  We didn't even try.  They won their war by forfeit.

In a world in turmoil, Afghanistan cannot be the focus of the West for very long before we begin sacrificing our interests and committments elsewhere.   The lead partner, America, has been funding these misadventures for almost a decade now entirely on someone else's dime.  Bush/Cheney waged two foreign wars and gave tax cuts to the rich funded entirely out of foreign borrowings.  If that sounds insane, it is.  It's the sort of madness you get from ideologues.  You don't have to look further than our own Furious Leader to see that.

The Taliban's war is cheap.   They can fund it out of their country's own poppy fields.  The West's war is very, very expensive and there aren't many players today that aren't facing heavy deficits at home.  Maybe America sees some future geo-political payoff from the Trans-Afghanistan Pipeline (TAPI) to secure control of the Caspian Basin oil and gas reserves for America and her regional allies, but for Canadians Afghanistan is just a hole into which to throw huge bags of money and scores of lives.

The RAND Corporation, oracle to the White House and the Pentagon, has already run its own assessment of our Afghan war and concluded that we've lost.  No matter how many artillery barrages and air strikes we call in tomorrow, from here on in it's all just banging on a drum.

So it seems that Bob Rae and Michael Ignatieff in arguing for a post 2011-role for Canadian troops in Afghanistan are either delusional or outright dishonest.   If the pair of them at this late stage are intent on using this screwed-up war as some political football that's simply despicable.  Dishonest or delusional it doesn't really matter to me except as yet another reminder of why I parted company with the only federal party I have supported since I began voting forty years ago.
Posted by The Mound of Sound at 8:10 AM