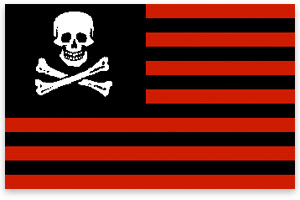 "Talking of patriotism what humbug it is. It is a word that always commemorates a robbery."
- Mark Twain
Rachel Maddow had an interesting segment last night exploring the question of whether the United States has become a true warfare state, whether it has entered a permanent state of war.

Eisenhower once warned his countrymen of the ascendancy of what he called a "military-industrial complex."   That was then, this is now.  Today's America has a military-industrial-warfighting complex.  It has added a large, powerful and influential mercenary arm to the mix who usually go under the benign title of "contractor."   Today's contractors can do everything from combat missions to recconnaisance and intelligence gathering and who knows what else?

Thanks to Iraq and Afghanistan, warfighting companies like Blackwater thrived and grew and became very, very wealthy.   For them, war is highly profitable and about the only thing they need fear is peace.   And the mercenary business along with the traditional military industrial base have become an integral component of America's economy.  The question is whether America is now addicted to war.

Former CIA consultant, professor of international relations and and author, Chalmers Johnson, warns that his country is teetering on an abyss:

"...the political system of the United States today, history tells us, is one of the most unstable combinations there is -- that is, domestic democracy and foreign empire -- that the choices are stark. A nation can be one or the other, a democracy or an imperialist, but it can't be both. If it sticks to imperialism, it will, like the old Roman Republic, on which so much of our system was modeled, like the old Roman Republic, it will lose its democracy to a domestic dictatorship."

"...Militarism is the -- what the social side has called the “intervening variable,” the causative connection. That is to say, to maintain an empire requires a very large standing army, huge expenditures on arms that leads to a military-industrial complex, and generally speaking, a vicious cycle sets up of interests that lead to perpetual series of wars.

It goes back to probably the earliest warning ever delivered to us by our first president, George Washington, in his famous farewell address. It’s read at the opening of every new session of Congress. Washington said that the great enemy of the republic is standing armies; it is a particular enemy of republican liberty. What he meant by it is that it breaks down the separation of powers into an executive, legislative, and judicial branches that are intended to check each other -- this is our most fundamental bulwark against dictatorship and tyranny -- it causes it to break down, because standing armies, militarism, military establishment, military-industrial complex all draw power away from the rest of the country to Washington, including taxes, that within Washington they draw it to the presidency, and they begin to create an imperial presidency, who then implements the military's desire for secrecy, making oversight of the government almost impossible for a member of Congress, even, much less for a citizen."


Maddow's guest, Andrew J. Bacevich, believes America has to free itself of a culture of delusion heralded in the myth of American exceptionalism.   Bacevich claims that most of what ails, and threatens, America was foreseen by Reinhold Neibuhr.   His lecture is worth reading and can be found here.

"Since the end of the Cold War the management of history has emerged as the all but explicitly stated purpose of American statecraft. In Washington, politicians speak knowingly about history's clearly discerned purpose and about the responsibility of the United States, at the zenith of its power, to guide history to its intended destination.

In Niebuhr's view, although history may be purposeful, it is also opaque, a drama in which both the story line and the dénouement remain hidden from view. The twists and turns that the plot has already taken suggest the need for a certain modesty in forecasting what is still to come. Yet as Niebuhr writes, "modern man lacks the humility to accept the fact that the whole drama of history is enacted in a frame of meaning too large for human comprehension or management."

Such humility is in particularly short supply in present-day Washington. There, especially among neoconservatives and neoliberals, the conviction persists that Americans are called up on to serve, in Niebuhr's most memorable phrase, "as tutors of mankind in its pilgrimage to perfection."

If, as some argue, America's economy is now married to the warfare state, if some version of Orwellian war without end has taken hold in the United States, what does that mean for America's allies, particularly Canada?   We're not only their allies, we're their neighbour and we're each other's largest trading partners.   Bush I and Bush II fashioned this notion of "coalitions of the willing" which were, all too often, coalitions of the mildly coerced that at times resembled an American Foreign Legion.  Do we need lines of demarcation to distinguish America's interests from Canada's.  We're just getting through our stint in Afghanistan.  Can we afford another reckless adventure like that?  Wouldn't it be great if we had leaders who weren't too timid to debate these issues?

(Graphic - Mark Twain was a fierce opponent of American imperialism.   He was a severe critic of the warfare state and, during his country's conquest of the Phillipines, he suggested America should make a special flag for that country, "white stripes painted black and the stars replaced by the skull and cross-bones.")
Posted by The Mound of Sound at 10:01 AM

Email ThisBlogThis!Share to TwitterShare to FacebookShare to Pinterest
Labels: militarism

Another good post! For those who do not know about America's imperialism read Gore Vidal's EMPIRE. They have been well at it for over 100 years, and furthermore, not a year has gone by where they have not been without a war to fight somehere, since WWII. It's what feeds the engine, the economy and the powers to be and yet the average American thinks its all about freedom, democracy and american pie. They are sheep led to slaughter and they know not why they do what they do...

"Democracy, behind which hides the dictatorship of money, then opens the path to Caesarism and the dissolution of the culture into total formlessness."

John Prince is right. It is a good analysis. Hopes were high with Obama but it looks he is clobbered by the Washington establishment.

To win election is one thing but to govern is a totally different cup of tea. One can only wish our neighbour well as their downfall will be deleterious for us too.

Since you have such a distinguised American audience as name dropped, does that mean they check out the people who comment as well?

Yeah, pretty shameless wasn't it. I think they more than check out you commenters. I'm pretty sure they have your addresses and phone numbers. Be very careful my friend. They're everywhere!

I figure the more people the US spooks have to follow, the more likely they are to screw up. There is only so much they can do :-)

I've never heard of Reinhold Neibuhr. I'm glad you highlighted his works. His words are entirely profound, and with Moyer's commentary, too, makes for a deep read. Thanks.

Yeah, I'm planning to delve deeper into this. Canada Post is supposed to deliver three books today - two Bacevich and one Chalmers Johnson.

Bacevich is a West Point grad and a retired US Army colonel who served from Vietnam to the Persian Gulf. He got a PhD from Princeton and taught at West Point and John Hopkins university. Wiki notes that his son was KIA in Iraq in 2007


Some time this fall, Bacevich is releasing a book that argues the American military is no longer under the control of its supposed political masters. In effect, he contends, the American military has become a fourth branch of government and one with all the guns. That seems consistent with the games Petraeus has been playing.