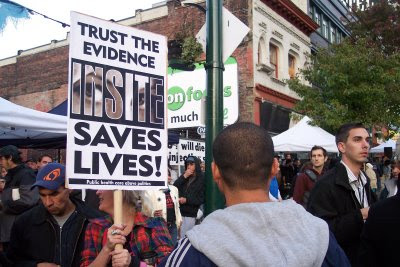 Insite, Vancouver's medically-supervised safe injection site for drug addicts, has been a thorn in Harper's paw since, well, forever.  It offends Furious Leader's rancid ideology and therefore it must be destroyed.  Armed with a pack of lies Harper bobblehead Tony Clement has waged a fierce battle to shut down Insite only to be sent packing by the BC Supreme Court and BC Court of Appeal.

The government is appealing the British Columbia decisions to the Supreme Court of Canada but now the Canadian Medical Association is weighing in with a study that even further repudiates the Harper-Clement lies.   The research paper, by Peel Associate Medical Officer Dr. Kathleen Dooling and University of Toronto professor Dr. Michael Rachlis, came out today in the CMA Journal.  The researchers found that Insite indeed reduces needle sharing, cuts overdose deaths and allows for addiction treatment.

Dooling and Rachlis debunk a lot of the nonsense the ever-disingenuous Clement has been tossing out including that miscreant's claim that Insite costs equal $14 per injection.   The report finds that Insite also delivers needed counselling and wound treatment.   The authors urge the Harper regime to abandon its appeal to the Supreme Court of Canada.   As if.
Posted by The Mound of Sound at 6:23 PM

Facts and/or data don't matter to the Harperbots. They live in a parallel universe

Yeah, and they've got about a third of the voting public duped into supporting them.