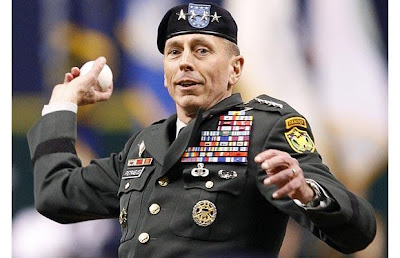 Beggars can't be choosers and losers can't be whiners.   Unfortunately that bit of wisdom doesn't seem to have reached America's whiner in chief, General David Petraeus.  Obama's Afghanistan commander made that clear on the weekend when he downplayed his president's plan to begin withdrawing U.S. forces from that country next year by telling reporters, "That’s a date when a process begins, nothing more, nothing less. It’s not the date when the American forces begin an exodus and look for the exit and the light to turn off on the way out of the room."

In his remarks, Petraeus reveals what critics like Andrew Bacevich contend is the hallmark of America's evolving hyper-militarism - military leaders pronouncing policy decisions that, in a democracy, are intended to be the exclusive preserve of their civilian masters, in this case Petraeus' constitutional Commander-in-Chief, Barack Obama.   The president (and Congress) get to decide when and how American forces are to leave Afghanistan, not some general no matter how many stars he sports on his tunic.

American generals, going back at least as far as Patton and MacArthur, have had a disturbing tendency to give democracy a short shrift when they felt particularly emboldened.  The Bush II era, unfortunately, brought out this worst trait in America's top brass.   Not only did the upper ranks come to believe it their place to weigh in on political policy they also found themselves immune to accountability for mediocre to positively awful generalship in the field.

The most powerful military force in the world spent seven years in combat in Iraq and is well into their ninth year in Afghanistan with virtually nothing to show for it but masses of dead littering their wake.  In Iraq, the country doesn't even have a government a half-year after elections were held.  The Sunni fighters once tamed by U.S. funds have returned to the Islamist-led resistance.  al-Qaeda is back in business. The Shiite are split and waiting to duel it out between themselves.   The Kurds are preparing to take on the southern Arab Iraqis over their claim to Kirkuk.   American generals have come and gone, usually into comfortable retirement, and nothing meaningful or lasting has been accomplished save for hanging a tyrant.

In Afghanistan it's probably even worse.   The Afghans have a government, what Chatham House calls a "criminal enterprise," and their country has been transformed into the world's greatest narco-state.   These most warlike of peoples - Pashtun, Tajik, Uzbek, Hazara, Turkmen, Baloch and so on haven't been able in nine-years to form an army capable of defending the government much less the country at large.  The Taliban, once routed, have returned first as an insurgency that  has now morphed into a classic rebel force waging a civil war.  If you're looking for success in Afghanistan you have to look at the steady progress made by the Taliban to find any.

Petraeus says that 2011 is not the year that American forces in Afghanistan will begin looking for the exit.   The truth is, Petraeus and all those in high command, should have had their eye on the exit from Afghanistan before they went in back in 2001.   It was their job to define the path to that exit before they went in  and how they were going to go about reaching that exit and when.   The problem is that these characters never want to set any metrics to define victory lest their own performance be judged.   If you don't define victory and don't define how you intend to get there and by when, you wind up with what we have today - a losing war without end that we've been at for nine years and counting.  Generals who think like Petraeus are not the solution, they're a big part of the problem.
Posted by The Mound of Sound at 9:13 AM

This article by the leading blogger on Hubpages (one of America's top 125 websites) describes a completely innovative and effective solution to the ongoing Quebec issue. He envisions the creation of a Canadian Capital District stretching from Ottawa to the West Island and to just east of Cornwall where bilingual rights are strictly protected, and which can also act as a tax-exempt Free Foreign Trade Zone to boost the area's economic development: http://hubpages.com/hub/The-Canadian-Capital-District-The-Solution-To-Finally-Achieving-English-French-Equality