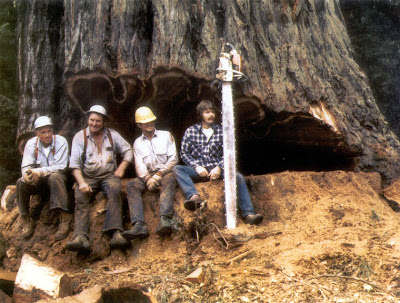 The satellites have spoken.   The world's tallest forests and, hence, the world's largest carbon sinks, are those along the Pacific Northwest from California straight through British Columbia.  From McClatchey Newspapers:


The temperate forests of Douglas fir, Western hemlock, redwoods and sequoias that stretch from northern California into British Columbia easily reach an average height of more than 131 feet. That's taller than the boreal forests of northern Canada and Eurasia, tropical rainforests and the broadleaf forests common in much of the United States and Europe. The only forests that come close are in Southeast Asia, along the southern rim of the Himalayas and in Indonesia, Malaysia and Laos.

Scientists suspect that the forests with the biggest trees store the most carbon, and the Northwest forests are probably among the largest carbon sinks in the world. However, they also say that while slower-growing older trees store more carbon, younger trees also absorb more carbon as they grow rapidly.


That sets up a debate about how forests should be managed, particularly whether older trees should be cut to make way for younger ones or whether they should be protected to store the carbon they contain.

Carbon absorption by trees in the Northwest tapers off as they reach from 30 to 70-years of age which is about the time it takes to grow commercial softwood.   This study will probably help the pro-logging lobby but those of us wanting to preserve the remaining old growth forests will just push back that much harder.
Posted by The Mound of Sound at 6:45 AM

Oldgrowth forest are not just carbon sinks. Oldgrowth forest arethe most impressive example of terrestrial life in all of its forms.Complex and biodiverse life is what makes our planet valuable and every species that is lost our planet decreases in value. Oldgrowth forest are life sinks containing more biodiversity than any other environment on land.The oldgrowth forest are irreplacable in a human life time and if are not spared now will not be allowed to mature in the future.The Oldgrowth forest of our planet are priceless natural treasures and are of much greater value alive than any thing they can be transformed into for the personal gain of a selfish foolish few while the rest of the world will suffer a tragic loss of life that cannot be replaced. Mature forest are a globally endangered habitat and should be protected world wide to preserve the quality and integrity of life on this planet.It should atleast be illegal to log oldgrowth in the us.Our natural resources should not be for sale as they are limited and our population continues to grow. Profit minded corporations and the forest service need to be put on a leash and phased out to make way for a generation that values life in all its forms and the health of our planet which absolutly supercedes everything else. If you disagree you are a foolish shallow narrow minded ork who is part of the problem.