An Eye Into Christian Bigotry 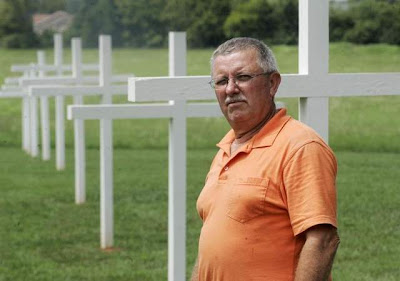 Anyone looking for the ugly face of Christianity need look no further than Murfreesboro, Tennessee.   The Grace Baptist Church decided to respond to the construction of a mosque by erecting 13 crosses along the route Muslims will take to pray.  It's part of a wave of Islamophobia that has swept through the redneck town.


Grace Baptist moved into its current home of about 6,000 square feet two years ago and is currently served by Interim Pastor Dan Watts.

The mosque next door has been the subject of intense scrutiny and debate in the past two years, including vandalism to its sign, a bomb threat, arson to construction equipment on site and a lawsuit to block its construction. Plaintiffs unsuccessfully argued in court that Islam is not a religion but won one battle in which the judge agreed that insufficient notice was provided by the county government concerning a meeting over the mosque’s site plans, which is under appeal. Construction on the first phase of the building is nearing completion.

Even in today's America, where bigotry and racism have become acceptable in mainstream society, the Murfs are decidedly outspoken.

Until the new Islamic Center was approved in 2010, “I didn’t know that there were any Muslims in this community,” said Pete Doughtie, owner of the Rutherford Reader, a local free newspaper.

His thoughts on Muslims are summed up in the headline of a recent column: “They have nothing positive to add to America.”

“All it takes for those Islamic warriors is to get enough foothold in one area such as our government in order for them to feel they are on a roll,” he wrote. “Our schools are vulnerable and are sitting ducks right now.”

Currently one Muslim student at Central Magnet School in Murfreesboro is allowed to pray in an empty room during lunch, said James Evans, spokesman for Rutherford County Schools.

“We have been a strong Christian country, and if we don’t get back to it, the whole face of this nation is going to change,” Doughtie said.

Email ThisBlogThis!Share to TwitterShare to FacebookShare to Pinterest
Labels: intolerance

I would suggest the "christians??" haven't been reading their bible much or their constitution.

People came to America for religions freedom. Now we have these "christians" trying to take it away.

No wonder America has lost its status as a leader in the world. With minds like these, you gotta wonder how the country even keeps going.