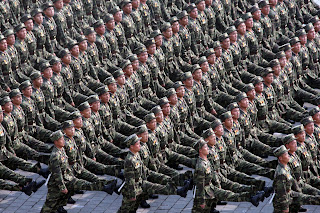 When I see Tea Party rank and file interviewed on television I'm often struck by how thoroughly indoctrinated they are.   They're sort of the white bread equivalent of North Koreans only obviously much better fed.

They've been taught things that they come to firmly believe and it seems they're programmed to auto-reject anything, no matter how factual or blatant, that conflicts with their received wisdom.

A telling example is the standard Tea Partier response to global warming and what should be done about it.   They're apt to dismiss it as a hoax and, like any serious hoax, it's for an ulterior motive.  What lies beneath the global warming issue, they claim, is a plot to effect a massive, unearned transfer of  wealth from the American people to those of the Third World, all under the auspices of the dreaded "world government."  It's downright Socialist that's bound to lead to gun control.

Oddly enough, these same Tea Partiers worship at the altar of Lord Reagan, the very president who set in motion a very real, truly massive unearned transfer of wealth from these same Tea Party rank and file into the pockets of America's ultra-rich; a pillaging that many, including Joe Stiglitz, contend has been going on for the past thirty years.

In The Price of Inequality, Stiglitz chronicles how government policy, not natural market forces, enabled the siphoning of wealth from working and middle-class America into the bank accounts of the richest of the rich.   Although per-worker productivity in terms of GDP increased a staggering 75% over those three decades, worker incomes stagnated and, for some groups, declined.   And where did the wealth those workers generated go to?   The question answers itself.   Take a bow, Mr. Romney.

The era ushered in by Ronald Reagan and his sidekicks Thatcher and Mulroney has been devastating to the middle class, especially in America.   The States' once healthy, vibrant and robust middle class has been hollowed out, gutted, forced to find comfort in debt instead of the deserved reward of their labours.  It's a national horror story but one that was entirely scripted in pages of bills enacted by Congress in the shadow and name of  Ronald Reagan.

While North Koreans are indoctrinated to blame their recurrent famines on the devious Americans, there's an even better scam underway in the U.S.   There the citizenry has it drummed into their heads that the source of their misfortune isn't their government and the elite it serves but actually themselves.   They learn to point a finger at liberals and, gasp, unions - the very institutions that seek to improve the lot of the working and middle-classes.   The illogic should be glaring but perhaps it's less so when you're struggling to hold down three, part-time jobs just to avoid default on your credit card balances.

And so, as Stiglitz and others observe, we're faced with an America that has terminal economic and social afflictions.   Not incurable but, left unremedied, certainly terminal.   Canadians need to become very aware of what's happening south of the border because it affects the health of our own economy and our own society.   As the Bank of Canada governor, Carney, warned, we have lashed the Canadian economy far too tightly to America's to escape the contagion.

Our garden gnome FinMin, Jimbo Flaherty, is the High Priest of Harper's Church of Conservative Corporatism.  He hears the pleas of Canada's CEO's who would wreck our middle class just as devastatingly as their American counterparts did in the States.   Canadian workers are overpaid, they claim.  Union powers must be suppressed.   We can't compete with America's diseased economy.

I have no interest in being transformed into a North American North Korean but I know with the regime currently in power, preventing that demands a public willing to stand up and speak out in defiance.
Posted by The Mound of Sound at 10:28 AM

I am reminded of Matt Tabbi's column from a few years ago, "America's Peasant Mentality".
How did it come to exist, anyhow? Was it generations of under-funding to education and health-care in red states? It probably played a major role, yes. And there is also need to consider the decades, even centuries long role of propaganda that has been railing against unionism and socialism, and that has somehow managed to conflate liberalism and communism as the same.
And then there were the assassinations of leaders such as Martin Luther King, Malcolm X, and Fred Hampton, and the recent discrediting of true liberal leaders such as John Edward and Elliot Spitzer. The former illustrates to people it's dangerous to be a populist activist working to change the government's behaviour from without, and the latter shows the US liberal class has no solidarity, because it was liberals who en masse abandoned those two, who were two of the too few examples in US politics willing to speak about class differences.
No, there is little to no hope to have about US politics or social change. It is a country, well done over by its rich and powerful.
I also gotta agree with Ian Welsh's assessment of the liberal leadership class in the US, "This entire generation of leadership on what passes for the left is beyond contemptible."
The people who call themselves American are truly those who are willing to 'live on their knees', as Ian Welsh illustrates. I'd even state that our cousins down south are even willing to 'crawl on their bellies' for their masters.

Hey, Troy. Thanks for the links, both good reads.

America was the society that virtually defined "middle class" for the world - until Reagan came to power. Gradually the three great inequalities (wealth, income, opportunity) were ushered in again largely through government policy aimed at benefitting the richest at the expense of blue and white-collar Americans. That effected a huge transfer of not only wealth but the political influence that goes with it.

How did the American public allow themselves to be so thoroughly hoodwinked? In part it resulted from working America being transformed into what Allan Greenspan called the "precariat." Fearful, enfeebled, insecure and angry people are pretty easy to manipulate.

As Chomsky writes, the ascendancy of the Plutonomy has come to define the struggle for the survival of democracy itself in the 21st Century. And because of that we have to be really vigilant.