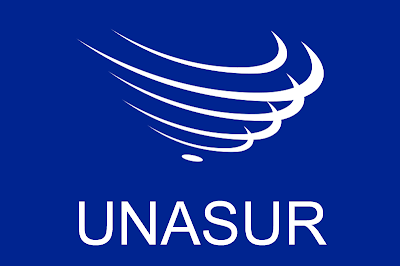 This takes everything to a whole new level.   The 12-foreign ministers of the Union of South American Nations have joined in support of a resolution backing Ecuador in granting asylum to Julian Assange and calling for a negotiated settlement.

"We reiterate the right of states to grant political and diplomatic asylum," the bloc's joint statement read.

Ministers at the UNASUR meeting ...were also critical of Britain's role in the diplomatic conflict, expressing "solidarity with and support for the government of Ecuador in the face of threats against its embassy in Britain."

Oh my, my.  It's curious to see so many South American countries showing this degree of solidarity and defiance of their Western "betters."   This is not the way we brought them up to behave.
Posted by The Mound of Sound at 9:59 AM

It also shows the level of democracy we have in U.S. , Canada, Britain, Australia, Sweden and other “great” western nations.

History is being made right in front of our eyes, LD, yet we don't see it. Latin America, an American-only backyard since the Monroe Doctrine, is now coming together, standing up on its own feet. They're cooperating instead of fighting and they're flexing their muscles. Now they have more trade with China than with North America and, worse, they've discovered they don't need our approval to prosper.

American hegemony is over and its residual influence is waning.

A similar situation is happening in the Middle East. The Sunni v. Shiite divide that we've exploited so ruthlessly for decades may be weakening, a win-win situation for the two Muslim sects.

The Saudis are beginning to talk with Iran and have announced they'll fire on any Israeli aircraft trying to transit Saudi airspace.

Mori, the new head of Egypt, has dodged Obama's invitation to visit Washington and is going to Tehran and Beijing instead.

America's militarized foreign policy is being widely seen for what it is - a threat. And that's backfiring on Washington as leaders from South America, the Middle East and Africa look to China to counterbalance America.

And it's all happening right before our eyes.

This isn't the only ongoing diplomatic controversy. There was the minor nationalisation of a Spanish-owned oil company by Argentina.

It really is puzzling why Europe is escalating fairly minor disagreements with Latin American nations into something near a cold war.

Psychologically, you might argue that European leaders are ginning up controversies to distract their populace from the awful economic and social problems they've dug themselves into.

It certainly is historic, and it angers me how many people don't think they are being duped when they argue for Assange's prosecution for claims that are coincidentally timed with Cablegate's release.

@ Chris. You could be right. Spain, however, didn't treat Argentina's oil gambit as minor. It seemed to drive them bonkers. I'm sure European leaders, like their counterparts everywhere else, like nothing more than a bit of offshore agro to keep the locals distracted.

@Saskboy, these are indeed historic times. Power structures, spheres of influence, everything is in flux. Most of us are limited to sporadic, fleeting glimpses of this change. A good many of us simply don't want to know.

When the Latin American members of the OAS defied Washington's and Ottawa's strident demands to keep Cuba out in 2009, the writing was on the wall.

Mound, in response to my comment you have summarized the world geo-political situation exceptionally well.

Iran is in a bit of trouble because of sanctions and guess who is coming to its rescue? None other than Iraq. Iranians must thank George W. Bush and Dick Cheney. Iraq has Shiite government now. This kind of co-operation would have never been possible when Saddam was in power.