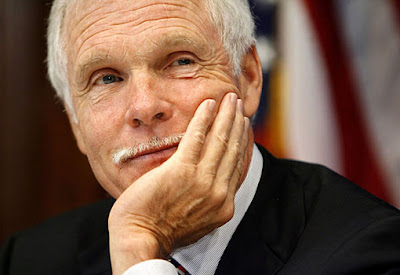 Billionaire Ted Turner is outspoken about the state of our Earth, and he puts his money where his mouth is on a scale that shames many affluent countries.   His message is plain, we can no longer ignore the future.   Living in the present is a formula for catastrophe:


We need to be planning for our children's future. We don't want to leave them in an impoverished world. People say, "We've got enough natural gas for 100 years." 100 years? That's nothing! What do we have for a thousand years? We won't have any fossil fuel at the current rate; we're not going to have any steel. We're running out of everything. We're like a rich kid who inherited his father's fortune and is running through it, buying yachts on the Mediterranean.

On Turner's creation of the U.N. Foundation:

I was ripped apart by the knowledge that the U.S. owed the U.N. a billion. I thought, 'Why don't I give them some money?' Nobody had ever given them a billion. I didn't know that until later. But the U.N. could not receive money from individuals or corporations. Did you know that? Nobody'd ever tried to give the U.N. money. So I thought "God doesn't want me to give away that billion!" (laughs) And I'd really worked hard for it! I was gonna buy CBS or something. I was going to do like all the other moguls do, just keep buying things. And what do you do when you buy them? You make more money and buy something else. I was doing that, I was buying a lot of things.
I went to bed thinking I wasn't going to (make the donation). And I didn't feel good. Then I woke up in the middle of the night and thought, "Why don't I create a foundation that works alongside the U.N.?" If the Foundation did only Nothing But Nets it would be worthwhile. But it does so much more.
For example, the Girl Up program is extremely important. Half of the women in the world don't have equal rights with men, and there's no excuse for that any more. Women have been pushed around enough.

On our failure to address the pressing threats to civilization:

I also gave close to $600 million to the nuclear threat initiative and most of the environmental causes. I've got a new bumper sticker coming out. The old one said, "Save the Humans," you know, like "Save the Whale" or "Save the Wolf." This one says, "Save Everything."

Between our nuclear weapons and our overpopulation, we're headed for, if not extinction, then very close to it. We know better. We don't have any excuses.

On fighting the good fight even when the odds are awful:

If I'd been running CNN, it would have stayed more with international news coverage than it has today. It would have stuck with more serious news. Be damned with ratings! Biggest isn't always best. Best is what's best. That's a judgment, but judgment is what we have brains for. The thing that makes us human beings is our ability to judge. Otherwise we might as well be monkeys. When I was with Captain (Jacques) Cousteau many years ago on the Amazon, on the Calypso, it was just after Reagan called the Soviet Union "the Evil Empire." That discouraged me, because I had been working so hard to help bring the Cold War to an end, and I said, "Captain, at times like this, I get discouraged" and he said, "Ted, let me tell you something. Even if we knew for sure we were going to lose, which we don't -- what else would men of good conscience do, but do their best to the very end, keep fighting to the very end?" I said, "Sounds good to me, Captain!"A
nd every time I get discouraged, I remember that and I stand with the Captain. And that's why we're going to win. We're going to win because we can't afford to lose. And if we lose, we'll go down fighting. We can't lower the flag. We won't surrender.
Posted by The Mound of Sound at 10:49 AM