Even for Harper, This is Perverse 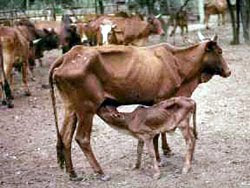 The people of the African Sahel are in a bad way.   You might even say that they're the poster boy for global warming.   Make that anthropogenic, or man-made, global warming which as the deluge of scientific research reports steadily confirms is largely the result of our profligate burning of fossil fuels.

Among fossil fuels, Canadian bitumen is one of the filthiest, most carbon intensive of all.   So our rush to extract bitumen and get it onto the market actually enhances greenhouse gas emissions of the sort that are cooking the poor folk of the Sahel.   But wait, Harper has an idea!   He thinks you ought to send a few bucks to the Sahel victims and Ottawa will match your contribution, presumably out of bitumen royalties - or your taxes.

Ottawa has established a relief fund for the troubled Sahel region, International Co-operation Minister Julian Fantino said, adding that Canadians themselves will dictate how much money comes out of the federal coffers.

The government will match Canadians' donations to registered charities supporting the Sahel region between Aug. 7 and Sept.

30, Fantino said. Ottawa has already made an initial $10 million contribution to the matching fund.

"Right now, millions of women, men and children in the Sahel are suffering from hunger and severe malnutrition," Fantino said in a statement. "This is absolutely unacceptable. With generosity from Canadians, we can do more to respond to this crisis and support people in dire need."

The hypocrisy of this government in flatly ignoring the contributory role its energy policy plays in the plight of the Sahel and other regions impacted by climate change is breathtaking.   No, it's more than that.   It's simply perverse.

I'm not sure there is any point railing against Harper, Fantino et al. They are just puppets of the corporate oligarchy, financed by the oligarchy, to give the slaves the illusion that they have democracy and freedom of choice.