I Don't Have a Problem with Crazy People 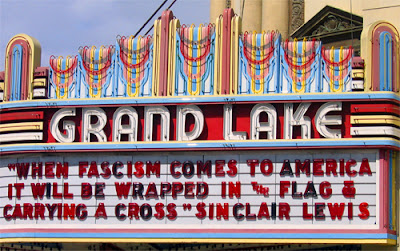 It's radical conservatives, people who act crazy to exploit others, that infuriate me.

You know they're acting crazy when they ramble on about "death panels" and socialism, "job creators" and endless tax cuts, supply-side or "trickle down" economics.   Only the truly crazy among them actually believe that crap but what's important isn't whether they believe but whether they can get you to believe it.

These radical conservatives are the altar boys of legislated inequality.   Nobel laureate economist Joe Stiglitz, writing in The Price of Inequality, issues scathing indictments against these elected handmaidens of the rich who so freely and persistently sacrifice the health and wealth of their country for the exclusive betterment of their patrons, the richest of the rich.  It's not al-Qaeda that the American people need fear, it's their Congressional Republicans (and a number of right-leaning Dems to boot).

Wilkinson and Pickett in their work, The Spirit Level, chronicle the social costs attendant on societies that embrace inequality - everything from crime and imprisonment rates to illiteracy, teen pregnancy, venereal disease, divorce, obesity and reduced longevity.   Wilkinson and Pickett are prominent British epidemiologists which accounts for why they explored inequality in the context of a societal disease.   Stiglitz, naturally, approaches inequality from an economic perspective to reveal the enormous and potentially lethal costs inequality inflicts on the state, the economy and democracy itself.

The radical (now mainstream, fringe no longer) right denounces those who attack them on inequality as socialist extremists when, in fact, they act in defence of democracy.  Movement conservatism is plainly undemocratic.  It recoils at the notion of government of the people, by the people, for the people.   Yet its purposes require that it presents itself as the defender, the very saviour of democracy and the American way.

The greatest problem is that there is no good ending to this scenario.   All that results from it is a transfer of inordinate economic and political power to the oligarchs that leaves the blue and white collar working classes impoverished, effectively disenfranchised and crushingly divided.   Just as social mobility is choked off, so are the traditional avenues for social and political reform.   And all this comes at the start of an era of climate change impacts that can only be effectively met by societies that are healthy, strong and cohesive.  It's small wonder that some observers are proclaiming this the Century of Revolution.   They would, they're not crazy people.
Posted by The Mound of Sound at 9:26 AM

What I wonder about, Mound, is why ordinary folks have put up with this balderdash for so long.

Owen, I suspect it's mainly the result of a sustained but subtle practice of indoctrination. It is why I have referred to the presence of North American North Koreans in our midst, particularly within the United States. It's a calculated effort to detach sizeable chunks of the electorate from reality in order to skew democracy - and it's working.

I sincerely believe that before too long the oligarchs will regret their support for every American's right to own as many guns and as much ammo as they want, especially those that if used for hunting would create ground meat on the spot. Once the majority figures out the correct target of their rage, even the gated communities won't be safe havens.

I know some folks think the plutocrats have the police and military to protect them, but look how ineffective the American might is against say the Afghan tribesmen, and I would suggest that the average citizen of Montana is better armed than the average Afghan!

Of course I guess they could just bomb the country into the stone age - to save it!