Is War With China Actually Possible? Is War of Some Sort Inevitable? 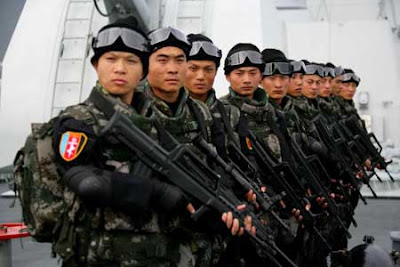 Is China on the verge of war?  War with whom?

There are factors building that suggest China faces the sort of instability that could force war on China and some other country.

For the past few decades, Russia and China have been closely allied but their relationship since the end of WWII has been at times turbulent.

Russia is now speaking openly about a perceived threat from China to Siberia and other Russian territory in the east.   President Dmitry Medvedev has announced a build up of Russia's naval power in the Pacific.   Meanwhile some prominent Chinese are promoting the idea of a Chinese military presence in the Arctic.

America is training for a first-strike air war on China.   That led to a complex air war exercise in Alaska called Operation Chimichanga.  The Pentagon is also developing what they call the Air Sea Battle strategy that has been criticized as a dangerous and potentially disastrous provocation of China.

Then we have the controversial F-35 joint strike fighter, in reality a stealth first-strike, light attack bomber.   The United States and all its key allies are signing on to buy this monstrously expensive warplane even as defence planners now openly admit its stealth technology is "perishable" and probably will be obsolete within five to ten years. 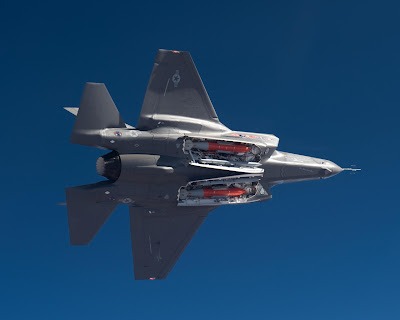 Why would so many countries buy a warplane with a dwindling "best before" date unless they foresee some potential need for it before then?   Are we buying the F-35 with the intent of flying it on combat sorties into Chinese airspace?

The question becomes what else would we do with it?   It lacks dual engine reliability.  It doesn't have the fuel capacity for long range patrol and interception.   It doesn't carry the sort of payload needed for ground support or the sort of missions we flew over Libya.  And it's a sub-par fighter, deficient in speed, climb rate and maneuverability.  We're signing on to buy a very expensive bomb truck.   Why?

But why would China, on the verge of economic superpowerdom, go to war?   The simple answer is that China is a country facing powerful environmental, social, resource and population challenges that may already be beyond its control.

China has a serious problem with desertification.   It is losing overworked, exhausted farmland that is being transformed into useless desert.   And roughly 40% of what arable farmland remains is beset with airborne contaminants, arsenic and heavy metals from industry, that render crops unsafe for consumption.   While the situation continues to worsen, it already leads to the ruin of 12-billion kilograms of foodstocks per year.

Much of China's fresh water resources are seriously contaminated.  Worse yet, China is already facing rapid depletion of its groundwater resources, its aquifers.   The shrinking supply of groundwater for irrigation has Chinese officials calling for the country to step up food imports.   Meanwhile the government's failure to crack down on criminal contamination of food supplies is generating unrest.

Some African countries are suspicious of China's benevolence and fear that it may be looking to them as a repository of between 300 and 500-million surplus Chinese.    The Africans believe China has become so environmentally and resource degraded that it can no longer support a population of more than 700-million and that assessment may not be far off the mark.

Another problem is the disparity in wealth in China.   While the country now has some billionaires, it has vastly more thousandaires.   Yes, the masses may be somewhat better off than they were prior to China's economic "miracle" but it's a marginal improvement at best.   And if China has to go to already hard hit world markets to get food for its people, their share of the miracle will evaporate very suddenly.   The rich can easily weather high food prices, the masses can't.   A Chinese journalist recently wrote, "For thousands of years the power of China's rulers hinged on their ability to feed the people. Revolutions aren't caused by political differences, they're caused by a lack of bread."

China's dilemma is unprecedented.   The world has never known a country that had hundreds of millions, perhaps a half-billion more people than it could support.   That's a nation, a people and a government that face almost unimaginable threats to their stability and their survival.   By any measure China seems to have outgrown its boundaries.   It needs lebensraum.

Relocating half a billion Chinese to Africa is the stuff of fantastic nightmares.   It simply can't be done.   Even if China could find some means of conveying that population, Africa, backed by the rest of the world wouldn't abide it.

So, short of a mass extermination of its own people, what is the Chinese government to do with them?   I think Dmitry Medvedev has an idea of what might be in store.   China has to find a big chunk of unoccupied or lightly occupied territory to house its overflow.   That it shares a 4,300-kilometre border with the largest nation on earth that itself has a declining population not much more than a tenth of China's might seem divinely fortuitous to Beijing.  The Russian president is already speaking out about Russia's perceived threat of a Chinese takeover.

America now views China as its greatest threat and takes it seriously enough to trigger a major pivot of its forces from the Middle East to South and East Asia.  China, especially its military leaders, are showing serious hostility toward the West and America in particular.  They're said to be looking for revenge for a "century of humiliation."

The United States appears content to build up its military presence in China's backyard and wait.   But, as Operation Chimichanga revealed, America is also preparing for a massive aerial first strike to take down China's air defences should the need arise.   The only real glitch is the delay in fielding the F-35.

The White House and the Pentagon aren't looking for a war with China but they must fear that China has become a human time bomb that, in one way or another, is likely to blow.   Russia will have to try to contain the blast from the north and northwest, India will try to hold the west while America and her allies police China's southern flank, prepared to intervene should the need arise.

Modern China is caught in the throes of the toxic manipulations of Mao Tse Tung.   As Tim Flannery explains in "Here on Earth":

"...perhaps the most enduring environmental legacy was Mao's encouragement of population growth.  At the beginning of his time in power China had around five hundred million people, and was widely believed by experts to be on the verge of dangerous overpopulation.   Yet Mao made contraceptives hard to get and exhorted women to have large families.   As one Chinese census on Mao has direct responsibility for the population problem.   As Party Chairman, policy depended upon him.   When he said "With Many People, Strength is Great" that was the last word on the subject."

- note - every major point in this post is accurately sourced and linked.   most links here are to earlier posts that are, in turn, linked to original source materials.

update - since posting this piece I stumbled across a report of a study by Jianguo "Jack" Liu, director of Michigan State University's Center for Systems Integration and Sustainability on China's water woes.

China's crisis is daunting, though not unique: Two-thirds of China's 669 cities have water shortages, more than 40 percent of its rivers are severely polluted, 80 percent of its lakes suffer from eutrophication -- an over abundance of nutrients -- and about 300 million rural residents lack access to safe drinking water.

Liu says China's approach to its water crisis as an engineering problem won't is short-sighted.

"There is an inescapable complexity with water," Liu said. "When you generate energy, you need water; when you produce food, you need water. However, to provide more water, more energy and more land are needed, thus creating more challenges for energy and food production, which in turn use more water and pollute more water.

"In the end, goals are often contradictory to each other. Everybody wants something, but doesn't take a systems approach that is essential for us to see the whole picture."
Posted by The Mound of Sound at 8:02 AM