Gearing Up For War With China? 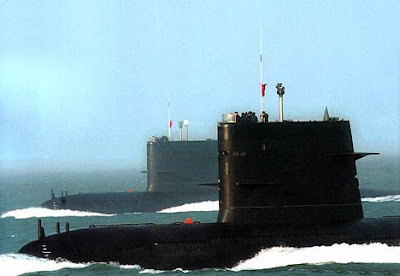 An Australian defence expert says America is playing a dangerous and potentially disastrous game with China.

The American plan, known in Washington as Air-Sea Battle, is strategically flawed, Australia's foremost regional defence expert, Hugh White, said, and risks escalating a US-China struggle to the level of nuclear strikes. It is also known to have angered the Chinese military, and the confirmation is likely to be viewed with displeasure in Beijing.

The confirmation was provided by Admiral Dennis Blair, a straight-talking Asia expert who until 2010 was Mr Obama's director of national intelligence. Before that he led the US Pacific Command, which represents about a fifth of the US military machine.

When asked about Air-Sea Battle and whether it directly related to China, Admiral Blair said: ''I'm not in the Pentagon any more, so I can't say [what] that [is] in particular, but it doesn't take any classified piece of information to let you know that countries like Iran and China … have taken advantage of technology in terms of submarines and missiles to be able to keep US maritime and air forces at a distance.''

As a result, he said, it was the job of US military commanders to ''figure out ways that we can send our forces to conduct military operations despite these sorts of threats''.

''I don't doubt for a moment … that the real target of the Air-Sea Battle is China,'' said Professor White, the author of a just-published book on the US-China relationship, The China Choice.

Professor White is also a strong critic of Air-Sea Battle, which he says has three fundamental problems. ''Firstly, I don't think it will work; second, even if it does work operationally it won't achieve its strategic aims; and thirdly it runs a very strong sense of escalating to a nuclear war.''

Professor White said the battle plan was also an old 20th century concept that is being repackaged for a 21st century enemy.

''The US has always done sea control in the Pacific, but what's changed? The enemy has changed. And he has a boat, as they say,'' Professor White said.

Last May, Wired magazine published an account of Operation  Chimichanga, an exercise conducted in Alaska that simulated a stealth, first-strike on China.

"China is steadily improving its air defenses. To make sure the bombers can get through, the Air Force plans to send fully-stealthy warplanes in first. The Northrop Grumman B-2 stealth bomber is the ideal trailblazer, as it proved over Libya when three B-2s knocked out the bulk of Libya’s radars, missiles and airfields in a single pass. But the Air Force possesses just 20 B-2s, only a handful of which are combat-ready at any moment."

Not only does the USAF have just 20 B-2s, it is crippled in having just 150 F-22s of limited operational reliability.   The warplane America is banking on for its Air-Sea Battle with China is the one Canada is so determined to buy, the F-35 stealth light attack bomber.   And, given the fact that the 35's stealth technology is admittedly "perishable" it would seem to argue that someone intends to use it sooner rather than later.   And there you have the best possible reason Canada should steer clear of Lockheed's first-strike light bomber.

And that's why the USN is proceeding with its new "stealth" littoral frigates, as you know.

Of course, you also know about the X-47B, and how it fits in.

As well, you also know about the USN's efforts with energy weapons and its electromagnetic rail-guns, and I', sure you're up-to-date on the USN's fusion program.

Lots of things happening. THe trick is not to plan for the last war. Capisce?

Yeah, I'm aware of those developments, Ed. It just makes me think of Twain's quip about to the man who has only a hammer everything looks like a nail.

But also, as Bacevich points out, the American military has enjoyed unparalleled firepower and technological superiority in its recent wars yet all the King's men and all the King's horses have failed dismally at yielding results.